Having compiled a list of the top 100 experts appearing in major world print media, we were interested to analyse to what extent these expert did or did not challenge the dominant state narrative of the ‘war on terror’.

We consider the dominant state narrative as the idea that the United States and its allies are at war with a global organisation called ‘Al-Qaeda’, which along with affiliated groups is waging an essentially apolitical war against ‘Western values’ or the Western ‘way of life’. In this narrative the ‘terrorists’ are irrational – being motivated by hatred and religious dogmatism – implacable and unscrupulous. Given the nature and scale of the threat, the ‘terrorists’ should be met with aggressive military action abroad and repressive policies at home.

We divided the experts into three broad categories based on the extent to which they challenged this narrative.

Category A: These experts tend not to challenge any aspect of the above narrative. We included in this category experts who might criticise specific decisions in the ‘war on terror’ but nevertheless do not challenge any aspect of the narrative. For example, we consider some individuals who have criticised the Iraq War as a distraction or as counterproductive, as fitting into this category (e.g. Benjamin, Simon).

Category B: These experts tend to challenge at least part of the above narrative. They might question the existence of a coherent organisation called ‘Al-Qaeda’ (e.g. Burke), or suggest an alternative understanding of the causes of ‘terrorism’ such as injustice or poverty (e.g. Krueger, McKinley). They might seek to portray ‘terrorists’ as rational actors motivated by political grievances (e.g. Pape), or warn against aggressive military action (e.g. Peña, Reeve) or the curtailment of civil liberties (e.g. Wright-Neville, Lynch).

Category C: These experts tend to reject the above narrative altogether, instead presenting a critical analysis of Western state policy. They might suggest alternative motives of Western states based on economic and geopolitical ambitions rather than safety and security, or focus on acts of ‘terrorism’ committed by Western states.

Critical Orientation of Experts from the Major World Newspapers List 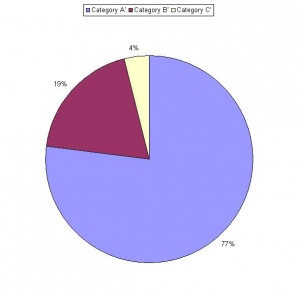 Pie chart showing the relative prominence of our three categories of experts. Non-critical experts are shown to dominate the major world print media

We considered 73 of the top 100 experts to be in ‘Category A’, 26 in ‘Category B’, and only one in ‘Category C’. The dominance of ‘Category A’ is even more pronounced than these figures would suggest. Only three of the ‘Category B’ experts appeared in the top twenty (although Noam Chomsky the one ‘Category C’ expert does appear in the top 10). The dominance of non-critical experts over partially critical experts is more pronounced if you consider how dramatic the differences in appearances are between the experts at the top and bottom of our top 100 list.

Because Noam Chomsky appeared to be somewhat of an anomaly (being a ‘Category C’ expert and appearing at number two in the list) we examined his appearances more closely, focusing on the articles returned in the last year of our seven year time period.

A search of the Lexis Nexis Major World Newspaper group for articles mentioning terrorism and Noam Chomsky during 2007 returned 78 articles. [2] None of those articles included any consideration of Chomsky’s views on terrorism or political violence, and the great majority of them mentioned him only in passing. 54 articles mentioned Chomsky in only one sentence, and 30 of those mentioned his name alongside another individual or other individuals. He was directly quoted in only six articles. [3]

Of course it is to be expected that Chomsky is less widely quoted than other individuals in the study since his work is not limited to terrorism but covers broader issues. A useful point of comparison therefore is Alan Dershowitz. Like Chomsky, Dershowitz is a US academic who comments widely on foreign policy issues including terrorism and counterterrorism. Though in other ways comparable, we consider Dershowitz to be in our ‘Category A’.

Another aspect worth noting is that many of the articles mentioning Chomsky also included extremely critical comments. Articles accused him for example of “infantile solipsism and self-hating nihilism”, of “feed[ing] into the rising tide of worldwide anti-Semitism”, [5] of “convoluted yammering about foreign policy” [6] and “flights to a separate reality”. [7] Dershowitz despite having controversially advocated the use of torture barely received any criticism. The most critical comment from the sample appeared in the Washington Times where he was accused of failing to acknowledge the complexity of the debate over the Israel Lobby and U.S. Foreign Policy. [8] Finally it is worth noting that Google searches suggest that Chomsky is by far the most influential figure in our analysis of experts on the internet. [9]