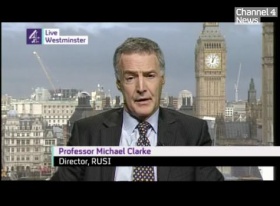 Michael Clarke has been the director of the British security and defence think thank, the Royal United Services Institute (renamed to the Royal United Services Institute for Defence and Security Studies) since 2007 after being appointed in succession to Rear Admiral Richard Cobbold who retired that summer. Clarke's stated areas of expertise are "the politics of international security and terrorism, British defence policy, transatlantic relations, Nato policy making and the EU."[1] Clarke has written for a number of mainstream publications and academic journals and appeared in TV media as a security expert.

Calling Al Qaeda "the most potent terrorist threat to the UK"[2] and emphasizing "serious and persistent threat from residual terrorist groups linked to Northern Ireland,"[2] Britain's National Security Strategy[3] cites cyber attacks, inter-state conflict, and terrorism as the greatest threat's to Britain's security along with the threat of natural disasters.

Clarke wrote a generally favourable review of the Security Strategy which was released in October 2010, though he did note that the cuts to defence spending "are not trivial"[4] while citing cancellation or retiring of military hardware and the "25,000 civilians"[4] who will lose their jobs, along with a "17,000 reduction in Armed Service numbers."[4]

According to Clarke, the strategy, though admittedly "aspirational"[4] ultimately shows that the "government has decided that Britain will still strive to remain a global player"[4] and is "an implicit rejection of the Blair approach that Britain should aim principally to be a 'force for good' in the world."[4] Clarke also applauded PM David Cameron's decision to "to impose no more than an 8 per cent cut on defence across the board, putting more pressure on cuts in other ministries" going "against strong Treasury pressure."[4]

In June 2009, Michael Clarke warned that the threat of Islamic terrorism "would not wither away in the near future: it is likely to be generational." He stated that the success of police and intelligence operations that had been executed were "the golden age of counter-terrorism", but had led to British prisons becoming "universities of terror". He argued that "the security services had done a good job so far in containing a new, home grown threat to public safety and to the UK's chosen way of life ... [but] ... the 90-odd convictions [which have been secured relating to terrorism] ... will have their own longer-term consequences for which the government must be prepared."[5]

In August 2010, Michael Clarke and Valentina Soria authored a report published by RUSI, that warned of a new-phase of home-grown terrorist attacks because of escalating in-prison radicalisation. The report stated that up to 800 "potentially" violent radicals who have not been convicted of terrorist offences could be released in the next 5-10 years and could be targeted or groomed by extremists and radicals upon their release.[6]

The report warns that the nature of the threat posed by such individuals would see a shift in tactics - it would be a "new-wave" of terrorism. Clarke and Soria argue that this "new-wave" will move-away from "large-scale, co-ordinated bombings, which have needed considerable training and operational support, to the greater use of lone individuals carrying out smaller-scale random attacks against different targets".[6]

The report also states that "attacks on 'crowded places' are near the top of the government's risk rankings over the next five years."[6]

The Ministry of Justice (MoJ), the institution responsible for prisoners and prisons in the UK questioned the figure of 800. It stated: "The prison and probation service does not recognise the figure of 800 'violent radicals' referred to in the report, nor do we agree that jihadist radicalisation is taking place at a rapid rate.There are only 6,000 prisoners in the high security estate, most of whom are not Muslim. The figure of 'one in 10 of the 8,000 Muslims' in the high security estate is therefore unrecognisable."[6]