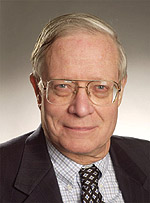 Anthony Huff Cordesman (born 2 August 1938) is an American strategic analyst at the Center for Strategic & International Studies (CSIS) specialising in ‘defence’ and the Middle East. He regular appears as a commentator in the US media and is a national security analyst for ABC News.

Anthony H. Cordesman holds the Arleigh A. Burke Chair in Strategy at CSIS. He is also a national security analyst for ABC News. His analysis has been featured prominently during the Gulf War, Desert Fox, the conflict in Kosovo, the fighting in Afghanistan, and the Iraq War. During his time at CSIS, he has been director of the Gulf Net Assessment Project and the Gulf in Transition Study and principle investigator of the Homeland Defense Project. He also directed the Middle East Net Assessment Project and was codirector of the Strategic Energy Initiative. He has led studies on the Iraq War, Afghan conflict, armed nation building and counterinsurgency, national missile defense, asymmetric warfare and weapons of mass destruction, global energy supply, and critical infrastructure protection. He is the author of a wide range of reports on U.S. security policy, energy policy, and Middle East policy, which can be downloaded from the Burke Chair section of the CSIS Web site (www.csis.org/burke/). Cordesman formerly served as national security assistant to Senator John McCain of the Senate Armed Services Committee, as director of intelligence assessment in the Office of the Secretary of Defense, and as civilian assistant to the deputy secretary of defense. In 1974, he directed the analysis of the lessons of the October War for the secretary of defense, coordinating U.S. military, intelligence, and civilian analysis of the conflict. He has also served in other government positions, including at the Department of State, Department of Energy, and NATO International Staff. He has had numerous foreign assignments, including postings in Lebanon, Egypt, and Iran, and he has worked extensively in Saudi Arabia and the Gulf.[3]

Cordesman first gained notoriety when he published a report for CSIS entitled Peace and War: Israel versus the Palestinians: A Second Intifada, which openly recommended the use of torture and repression against Palestinians.

Passages from Cordesman’s Iraqi Security Forces appeared to have been cut and pasted from an article by Michael Rubin from the Turkish Policy Quarterly. Rubin reviewed Iraqi Security Forces in the Middle Eastern Quarterly writing that: “Sloppiness with sources and citations is a problem. On page 3, for example, he reproduces practically verbatim and without citation several paragraphs of an article this reviewer published in 2005. Although Cordesman does not intentionally plagiarize, this incident does suggest inattention and an over-reliance on careless research assistants.”[4]