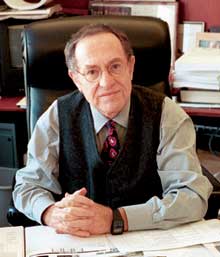 Alan Morton Dershowitz (born 1 September 1938) is an Jewish-American lawyer, academic and political commentator. He is an outspoken advocate of Israel's policies and has been involved in a number of high profile disputes with those who have criticized Israeli policy. Dershowitz's arguments have been met with criticism from opponents on both the right and left wing of the political spectrum[1][2].

Dershowitz is best known for attacking critics of Israeli policy through the media and in the case of dissident American-Jewish academic Norman Finkelstein, through his connections and channels of influence. After Finkelstein produced extensive scholarship exposing flaws and inaccuracies in Dershowitz book, The Case for Israel, Dershowitz waged a campaign against Finkelstein which resulted in Finkelstein being denied tenure at Chicago University and being unable to find suitable employment elsewhere.[3] In 2009 an award-winning documentary providing an in-depth look at the events surrounding Dershowitz and Finkelstein's dispute was produced.[4]

Norman Finkelstein alleged in his book Beyond Chutzpah that of the 52 quotations and endnotes in the first two chapters of Dershowitz's book The Case for Israel, 22 are almost exact replicas of another book. The other book In Time Immemorial by Joan Peters was also criticised by Finkelstein. Finkelstein argued that instead of quoting Peters as the source, Dershowitz cites the original sources from Peters' footnotes[5].

Finkelstein also alleges that Dershowitz's defence of Israel's human rights record during the second intifada is based on flawed or fraudulent data, which Finkelstein challenges with reports from organisations such as Amnesty International, the US-based Human Rights Watch and the Israeli human rights organisation, B'Tselem. Says Finkelstein, "I juxtapose what he says is going on there and what is actually going on there."[6].

Finkelstein describes Dershowitz book as "among the most spectacular academic frauds ever published on the Israel-Palestine conflict." Finkelstein picks out many similarities between the books by Peters and Dershowitz, for example he says:

On a note both humorous and pathetic, Peters, in From Time Immemorial and claiming to be inspired by George Orwell, coins the term "turnspeak" to signal the inversion of reality (pp. 173, 402). Dershowitz, apparently confounded by his massive borrowings from Peters, credits the term "turnspeak" to Orwell, accusing critics of Israel of "deliberately using George Orwell’s ‘turnspeak’" (p. 57) and "Orwellian turnspeak" (p. 153). Is this scandalous scholarship, or is it plagiarism, or is it both?[7]

The Case for Torture

Dershowitz argues that laws safeguarding human rights are no longer relevant in the age of the suicide bomber. He lays out three key reasons for this:

"First, there is often no known entity to attack, since the suicide terrorists have died and the leaders who sent them have gone into hiding among civilians and may well be preparing renewed terrorist attacks".

"Second, there is no good reason for a democracy to have to absorb a first blow against its civilian population, especially if that blow can be catastrophic".

"Third, there is little possibility that potentially catastrophic first blows can be deterred by the threat of retaliation against a phantom enemy who welcomes martyrdom"[8].

Dershowitz argues for the legalization of torture of those who are labeled as "terror suspects."

"While it may well be necessary for democracies to fight terrorists with one hand tied behind their backs, it is neither necessary nor desirable for a democracy to fight with two hands tied behind its back, especially when the ropes that bind the second hand are anachronistic laws that can be changed without compromising legitimate human rights. The laws must be changed to permit democracies to fight fairly and effectively against those who threaten its citizens. To paraphrase Robert Jackson, who served as the United States chief prosecutor at Nuremberg - the law must not be "a suicide pact""[9].

In 2006 Dershowitz was the keynote speaker for a conference put on by the now defunct IAB at Bar-Ilan University dedicated to delegitimizing arguments for an academic boycott against Israel. Dershowitz argued that boycotts "abet terrorism" and that Israel's human rights abuses do not warrant a response like that of a boycott.

"People who advocate boycotts and divestiture will literally have blood on their hands...They encourage terrorism and discourage the laying down of arms."[10]

On Israeli Bombing of Palestinian Civilians

During Israel's Winter War on Gaza which took the lives of over 1,400 Palestinians, the majority civilians, Dershowitz wrote "The Criminal Cynicism of Hamas" where he argued that Hamas are to blame when Palestinian civilians are killed by Israeli weapons because the civilians were in the line of fire, thereby making them legitimate targets.[11]

He goes on to argue that the number of civilians killed by Israel is exaggerated and again defends Israel's killing of children and women by arguing that they don't count as civilians if they are labeled as "terrorists" by Israel.

"Moreover, the number of civilians killed by Israel is almost always exaggerated. First, it widely assumed that if a victim is a "child" or a "woman", he or she is necessarily a civilian...Some of these children and women were certainly civilians, but others were equally certainly combatants: Hamas often uses Palestinian youths, as well as women, as terrorists. Israel is entitled, under international law, to treat these children and women as the combatants they have become."[11]

Dershowitz admits that Israel kills as "many civilians as possible," but again blames Hamas for Israel's actions, saying that Israel's actions were justified because they were provoked by Hamas. According to Dershowitz, Hamas encourages Israel to bomb its people because this warrants condemnation.

"Hamas does everything in its power to provoke Israel into killing as many Palestinian civilians as possible, in order to generate condemnation against the Jewish state".[11]