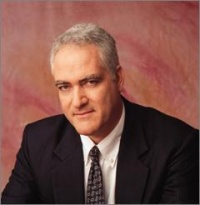 Boaz Ganor is an Israeli terrorism expert with close links with the Israeli military and intelligence services. A former advisor to the Israeli government he heads the International Institute for Counter-Terrorism based in the Interdisciplinary Center – a private educational institution in Herzliya, Israel. He is also involved in a number of other organisations with strong links to intelligence agencies, the military and private security companies in Britain and the United States.

Ganor has an MA in Political Science from Tel-Aviv University and a Ph.D in Political Science from the Hebrew University, Jerusalem. His MA was awarded in 1989, and his thesis was titled ‘Terrorism and Public Opinion in Israel’. His Ph.D thesis, published in 2002, was written in Hebrew and titled, ‘Mediniyut Yiśra’el be-hitmodedutah ‘im ha-ṭeror: efeḳṭiviyut mul ‘arakhim demoḳraṭiyim-liberaliyim’, which translates as ‘Israel's Counter-Terrorism Strategy: Efficiency Versus Liberal-Democratic Values’. [1] In evidence to a Canadian Parliamentary Subcommittee Ganor explained the thrust of his Ph.D thesis as follows:

Ganor was awarded his Masters in 1989, when he would have been in his late 20s. During the early 1990s he served as an Israeli government advisor, and authored a number of articles on ‘terrorism’. In November 1991 Ganor wrote an article for the Israeli think-tank the Jerusalem Center for Public Affairs entitled ‘Syria and Terrorism’. An editor’s note accompanying the article read: ‘After Syria's appearance at the Madrid Peace Conference, we must remind ourselves with whom Israel must deal. The U.S. needs to be reminded, too; hence, this Special Report.’ [3] He wrote similar articles on Hamas in 1992 and Islamic Jihad in 1993. [4] The contributor notes for these articles described Ganor as ‘a researcher specializing in terrorism and a member of the editorial board of Matara, The Israeli Magazine for Intelligence, Weapons, Military and Security.’

There are only a handful of English language references to Matara magazine, but these sparse references suggest that (as you would expect from a magazine ‘for Intelligence, Weapons, Military and Security’) it had a right-wing militaristic attitude to the Arab-Israeli conflict. In 1990 the Jerusalem Post ran a story quoting the editor of Matara following a bus explosion in Egypt. The article also quoted the veteran Israeli terrorism expert Ariel Merari as saying: ‘There is no proof that there is a connection with Palestinians.’ The editor of Matara disagreed claiming: ‘There is a connection between all the terrorists... Egyptian Revolution or Islamic Jihad, Gazan or Iranian, it's all the same thing.’ [5] In 1991 Matara published a ‘Who’s Who’ of Hamas members (then a little known group) which was referred to in a 1993 Associated Press report. The Associated Press was reporting on the summary expulsion of 399 Palestinians from the occupied territories – an act criticised by human rights groups. [6] According to the Associated Press:

Matara listed about 30 supposed activists. Some are in the latest batch of deportees, others were exiled earlier or imprisoned and a few are still in their homes.

The ‘Who's Who’ says little more about the newly exiled Palestinians than the deportation orders, which simply accused them of being ‘inciters.’

Matara’s most specific accusation is that deportee Nizar Abdallah ‘made contact’ with the Hamas squad that kidnapped an Israeli soldier in 1989 and later killed him. [7]

Ganor’s speaker’s biography on the website of the Milken Institute states that he was ‘counter-terrorism coordinator at the Prime Minister’s office from 1993-1996’. Another CV adds that he has been an ‘advisor on Counter-Terrorism topics to the Israeli Ministry of Defense… Israel's National Security Council, and the Israeli Ministry of Transportation’. No date is given for these appointments except to say this was ‘during the peace talks with Jordan’. [8] Israel and Jordon were parties to the Middle East peace talks which began in Madrid in November 1991, and the two countries signed a peace treaty on 26 October 1994. Ganor’s advisory roles therefore would have been held at some point between those two dates and probably during 1994, since otherwise he would most likely have referred to some involvement in the 1993 Oslo Peace Accords.

A 1995 article in the Jerusalem Post referred to Ganor as an ‘associate policy analyst at the Jerusalem-based nonpartisan Shalem Center, and a researcher on terrorism’. [9] In 1996 he is referred to in an article as ‘a researcher on terrorism at Hebrew University’, [10] and shortly afterwards in February 1997 he was called the ‘academic director of the Herzliya- based International Institute for Counter-Terrorism’. [11] It would appear therefore that Ganor began studying for his Ph.D in the mid-90s whilst also heading the International Institute for Counter-Terrorism.

Since 1996 Ganor has headed the International Institute for Counter-Terrorism, a terrorism research institute based in the Interdisciplinary Center – a private educational institution in Herzliya, Israel. The Interdisciplinary Center or IDC was founded in 1994 by Professor Uriel Reichman, a law professor formerly of Tel Aviv University. Its School of Law opened in 1994, and its Business School in October 1995. [12] According to its own literature, IDC’s International Institute for Counter-Terrorism (ICT) was founded a year later in 1996 by Boaz Ganor, the former head of Mossad Shabtai Shavit, IDC’s founder Uriel Reichman and a number of other figures. The first English language reference to Ganor being at ICT was in the Jerusalem Post in February 1997. [13]

Ganor is linked to a network of government affiliated terrorism experts in Britain and the United States centred around the RAND Corporation, the University of St. Andrews, and King’s College London.

He is a Senior Fellow at the Memorial Institute for the Prevention of Terrorism (MIPT), [14] a think-tank conceived in the aftermath of the 1995 Oklahoma Bombing. MIPT has been funded through the Office for Domestic Preparedness (ODP) in the Department of Homeland Security and has links to the RAND Corporation and numerous other corporate security companies. Other Senior Fellows at MIPT have included RAND’s original terrorism expert Brian Jenkins and Rohan Gunaratna and Alex Schmid; both of whom have been involved in the Centre for the Study of Terrorism and Political Violence at St. Andrews. 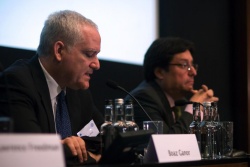 Ganor is also involved in the International Centre for the Study of Radicalisation and Political Violence (ICSR), [18] a terrorism research institute based at King’s College London. ICSR is a collaboration between King's College, the University of Pennsylvania in the United States, the Interdisciplinary Center Herzliya in Israel and the Regional Center on Conflict Prevention in Jordan. Ganor represents the Interdisciplinary Centre as one of the ICSR’s four ‘Academic Partners’ (along with Lawrence Freedman of King’s College London, Yasar Qatarneh of the Regional Center on Conflict Prevention and Harvey Rubin of the University of Pennsylvania).

In an interview with the Yale student magazine The Politic, Ganor referred to the Canadian Zionist Irwin Cotler as ‘a good friend of mine’. He says he met Cotler ‘20 years ago, when he was a professor of human rights law at McGill University in Canada.’ [19] Cotler has been described by the political activist Howard Galganov as ‘a totally unabashed defender and supporter of Israel’.[20] Fellow pro-Israeli activist and lawyer Alan Dershowitz, in his book Chutzpah, described Irwin Cotler as his ‘Canadian mirror image’.[21]

Influence in media and academia

As of 3 September 2009 the online academic database ISI Web of Knowledge listed only one article by Ganor. [24] The article entitled, ‘Terrorist organization typologies and the probability of a boomerang effect’ was published in Studies in Conflict and Terrorism in 2008. [25] At that time the article had not been cited by any other publication in the ISI Web of Knowledge databases. The Editor-In-Chief of Studies in Conflict and Terrorism is Bruce Hoffman and its board is made up of a number of other figures from RAND and the Centre for the Study of Terrorism and Political Violence at St. Andrews. It also includes Peter Neumann, affiliated to Ganor through the International Centre for the Study of Radicalisation and Political Violence. [26]

“I expect that the proposals will be opposed by those who see this superficially as an attempt by the United States and Israel to gain legitimacy for their actions.” – Boaz Ganor [27]

During the conflict Ganor had dinner in Chicago with the Dean of Syracuse University Mitchel Wallerstein. The two men agreed that, as Ganor put it the Geneva Conventions needed ‘fine-tuning’ for ‘the asymmetric battlefield’, ‘especially in light of the current threats to [Israel and the US].’ [28] Ganor is quoted as saying, ‘We talked about the frustration we had over how the world was relating to the war, mainly the claim that Israel wasn't responding with “proportionality.”’ [29]

According to the Jerusalem Post the meeting between Ganor and Wallerstein ‘led to a series of international video conferences, in which primary avenues for research were identified.’ [30] On 9-10 July 2007 the Interdisciplinary Center Herzliya hosted a two day ‘workshop’ entitled ‘New Battlefields, Old Laws, From the Hague Conventions to Asymmetric Warfare’. The participants suggested expanding the categories of persons under the Geneva Conventions from just combatants and non-combatants to four new categories which would include ‘illegitimate non-state entities’ who would not be afforded the protection of the Conventions. [31] A second conference, also entitled ‘New Battlefields, Old Laws’ was held in the United States on 8 October 2007, and hosted by Syracuse University's Institute for National Security and Counterterrorism.

The latter conference was criticised in the Catholic weekly the National Catholic Reporter, which said the conference ‘amounts to is a public diplomacy exercise to conceal war crimes.’ [32] After noting the complete lack of evidence that Hezbollah used ‘human shields’, as well as the widespread damage to civilians and civilian infrastructure in Lebanon, the author of the piece Howard Friel concluded that: