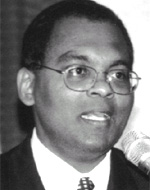 Rohan Kumar Gunaratna (born 1961) is a Singapore-based "terrorism expert" at the Institute of Defence and Strategic Studies (IDSS) where he is currently an Associate Professor and head of its International Centre for Political Violence and Terrorism Research (ICPVTR). As a Sri Lankan, his original area of expertise is in the Tamil Tigers, a militant Tamil separatist group. However, since September 11th, he has become a prolific commentator on global terrorism and has often appeared as a terrorologist pundit.

Gunaratna worked for the Sri Lanka Government between 1984 and 1994[1] In late 1989 he visited the US for the first time on the State Department International Visitor Program. He stayed for there a month and was impressed by the experience. He used a computer for the first time and met Stephen Cohen, now a Senior Fellow at the Brookings Institution who he describes as “a brilliant guy”.[2]

On return to Sri Lanka after a month in the United States, Gunaratna and his fellow South Asia visitors set up a group called the South Asian Network On Conflict Research (SANOCR). The SANOCR group published scholarly articles on conflict in South Asia and according to Gunaratna it operated for about 10 years and the members still keep in touch.[3]

In the United States

Gunaratna left his government job in 1994 and began terrorism studies in the United States. In 1994 he worked at the Office of Arms Control, Disarmament and International Security at the University of Illinois,[4] where Stephen Cohen (who Gunaratna had met on his earlier visit to the states) had just been appointed Director. In 1995 he worked at the Center for International and Security Studies at the University of Maryland where he says he worked with Stansfield Turner, the former head of the CIA.[5]

In 1996 Gunaratna began a master of arts at the Joan B. Kroc Institute for International Peace Studies at Notre Dame University. This Gunaratna said, was his first “opportunity to focus on their [the Sri Lankan insurgencies’] international operations”[6]. At Notre Dame University he linked up with the Centre for the Study of Terrorism and Political Violence and got to know the Centre’s then head, Bruce Hoffman. [7]Gunaratna’s Masters thesis was ‘Changing nature of warfare: Ltte at the razor’s edge’ and was published in 1997.

After completing his Masters, Gunaratna went on to study a for Phd at the Department of International Relations, at the University of St. Andrews where he was British Chevening Scholar (The UK Foreign Office's Scholarships and Awards Scheme) from 1996-1999. His PhD was supervised by Bruce Hoffman. [8] After completing his PhD he became a Fellow at the University’s Centre for the Study of Terrorism and Political Violence. Still his expertise were in South Asian conflict, and he is described in publications as for example “a specialist on Asia-Pacific guerrilla and terrorist groups”[9]

Until 2001 Gunaratna had focused on his native Asia-Pacific region, but after September 11th he became a prominent commentator on Al-Qaeda. According to journalist Gary Hughes, Gunaratna describes a “spiritually defining moment” when he learned that the Taliban had ordered the demolition of the statues of Buddha at Bamiyan in March 2001.[10] Gunaratna’s new interests were well timed. Only a month before September 11th he published his first piece on Al-Qaeda in Jane's Intelligence Review.

In 2002 his book Inside Al Qaeda: global network of terror and published and it became a best seller. The publishers claim the book is based on five years of research.[11] Amongst the books revelations was Gunaratna’s unearthing of an Iran-Hezbollah-Al-Qaeda which he claimed had coordinated attacks on Western targets.

Gunaratna is often accused of exaggerated threats and making unsubstantiated claims. He is also known to have exaggerated his own expertise.

In Inside Al Qaeda, Gunaratna described himself as having been, “principal investigator of the United Nations’ Terrorism Prevention Branch”. After the Sunday Age made checks on Gunaratna’s biographical details, Gunaratna admitted that there was no such position as principal investigator at the UN’s Terrorism Prevention Branch and that he had worked there in 2001-02 as a research consultant. Gunaratna also retracted his claim that he “was called to address the United Nations, the US Congress and the Australian Parliament in the wake of September 11, 2001”, confirming that in fact he had spoken at a seminar organised by the parliamentary library and given evidence to a US congressional hearing.[12]

The same article also reports scepticism in the intelligence community over Gunaratna’s judgment:

“Members of Australia’s intelligence community, and in particular ASIO, are known to be dismissive of many of Gunaratna’s more sensational statements, such as claims that alleged military chief of the Jemaah Islamiyah network and senior al-Qaeda member Hambali had regularly visited Australia.”[13]

Gunaratna's work on Thailand has been criqued by Michael K. Connors in the academic journal Critical Asian Studies in 2006. Connors' extended critique:

interrogates how terrorism experts have interpreted the recent escalation of violence in the Thai southern border provinces. It does so by questioning the authors' use of sources, and draws on a range of alternative Thai-and English-language sources to suggest that the authors have reached poorly founded conclusions.[14]

Connors' critique 'presents an overview of competing theories concerning events in Thailand', then critiques 'the book's conclusion that Thailand faces a renewed insurgency, largely driven by domestic factors and carried out by definable actors.' Claiming that he has uncovered 'some significant factual and interpretative errors that severely undermine the credibility of the book', he notes that contrary to Gunaratna's account 'various interpretations of what is happening in the South of Thailand remain plausible', and the article concludes that 'the authors of Conflict and Terrorism were too poorly equipped to deal with these competing interpretations to offer any insights into the conflict.'[15]

Gunaratna worked for the Sri Lanka Government between 1984 and 1994 and according to The Sunday Age developed “very close links with Sri Lanka’s intelligence service”.[16] Although supposedly an independent expert, Gunaratna continues to be linked to government anti-terrorism and intelligence agencies. Gunaratna’s research institute the International Centre for Political Violence and Terrorism Research includes on its board Richard Dearlove the former head of MI6, and David Veness a former Assistant Commissioner of Specialist Operations in the Metropolitan Police. In USA v. Padilla Gunaratna was cross examined on the Al-Qaeda interviews he had conducting for Inside Al Qaeda in 2002. Gunaratna said: "In some interviews I worked for governments. I do not wish to name these countries. I would be breaching some confidentiality and agreements I signed with governments." Defence lawyers in the case suggested that the interviewees may have been subjected to torture.[17]

Speeches and other publications