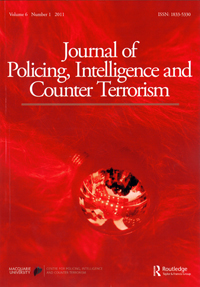 The journal which was first published in 2006 by Routledge publishers and is issued biannually.

The Journal of Policing, Intelligence and Counter Terrorism undertakes high quality research and practice in the areas of:

The journal is said to 'offer national, regional and international perspectives on important areas of debate within these various fields, while addressing the practical and theoretical issues and considerations that surround them.' [2]