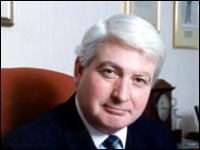 Sir David Christopher Veness, CBE, QPM (born 20 September 1947) was the Assistant Commissioner for Specialist Operations of the Metropolitan Police from 1994 to 2005 and Under-Secretary-General for Safety and Security for the United Nations until 2008.

In all these roles Veness worked closely with the UK Government and the Security Services. Appearing as a witness in the Diana Inquest, he provided a rare public admittance of collaboration between the police and the security services:

Q. You had pretty close connections with the security services, didn't you, during the whole of your career?
A. Particularly in relation to my duties in connection with terrorism, that was an implicit part of my duties.[15]

Following the events of 11 September 2001, Veness oversaw the response of the Metropolitan Police in reinforcing the national counter-terrorism capability. In this he was supported by Commander Bob Quick[16] and his Deputy Assistant Commissioner Barbara Wilding.

In 2002, he established Operation Kratos under Wilding which sent officers around the world with the view to developing new tactics for dealing with suicide bombers, including training in Israel.[13] Kratos was taken over by ACPO's Terrorism and Allied Matters board in January 2003 and subsequently became national policy.[17] Veness is also credited with introducing the phrase DADA - 'Deterimined And Deadly Attack[18] - and Operation Kratos 'outlines what level of force officers can use to thwart' such an attack, including shoot to kill.[19]

Veness also took a role in countering dissident republican terrorism in London, from setting up CCTV and ANPR in Canary Wharf following the 1996 Docklands bombing[20] to warning against potential threats from the Real IRA in the city in 2001.[21]

On receiving a knighthood in 2005, it was said of Veness:

He is recognised nationally and internationally as an outstanding expert in the fields of combating terrorism, responding to organised and international crime, and hostage negotiation.[...]
AC David Veness has made an enormous contribution to the capital's fight against terrorism and is an important national police figure, central to combating terrorism and its associated threats. He has personally directed a significant number of complex and highly sensitive investigations into terrorism that have produced very significant high-profile prosecutions.
He was responsible for the co-ordination of the massive police response needed in the aftermath of the 11 September attack on New York and Washington, and through this work is an exemplary ambassador for the Police Service of the United Kingdom with an unparalleled knowledge in this specialist area.[24]

In February 2005, Veness retired from the Metropolitan Police.[25] He was succeeded as Assistant Commissioner for Specialist Operations by his longtime colleague Andy Hayman.[26]

As head of Special Operations Veness oversaw various units including counter-terrorism and the Special Demonstration Squad (SDS), which targeted protestors. In this role Veness knew and worked closely with Bob Lambert of the SDS. The two men would have a long association, including through the work of the Muslim Safety Forum, and, after both had left the Police, at the Centre for the Study of Terrorism and Political Violence (see below).

By October 2004, Veness was secretary of the ACPO's Terrorism and Allied Matters (TAM) board.[27] At the time, TAM was running the reorganised national domestic extremism units, including, including the National Public Order Intelligence Unit and its infiltration of protest movements during the time of Mark Kennedy and others. A number of Veness's subordinate officers would go on to join the TAM board, including his former deputy Bob Quick who was its chair in 2008-2009.[16]

In a notable incident earlier in his career, in July 1992, Veness along with Commander Roy Ramm seconded fellow DAC Ian Johnston's authorisation of the use of an undercover policewoman to get close to Colin Stagg in the Rachel Nickell murder enquiry.[28] Johnston would go on to act as Condon's trusted lieutenant in matters relating to the Stephen Lawrence murder, including delivering Condon's apology over the role of the Metropolitan police in the Lawrence murder inquiry, including his own 'obstinancy'[29], before heading up the British Transport Police.

1993 saw the start of a major push against police corruption particularly that associated with the South East Regional Crime Squad (some of whose members would be later implicated in the News of the World hacking scandal). This invesigation was run by the Complaints Investigations Branch (CIB), and part of this included the formation of a secretive anti-corruption unit even within this known as CIB3, or 'Ghost Squad'. Veness appears to have been integral to this anti-corruption drive, working closely with the Metropolitan Police's Professional Standards Unit. As such he was part of a group of officers that included all three of his subsequent successors as Assistant Commissioner for Specialist Operations: Andy Hayman, Bob Quick and John Yates. These three would repeatedly interlink in subsequent scandals, including police corruption, the Stephen Lawrence murder inquiry, the News of the World hacking and the domestic extremism units.

In 1996, Veness' deputy as part of anti-corruption operations was Det. Supt. Chris Jarratt, who headed up intelligence and covert operations at CIB. Jarrett had also taken over the inquiry into murder of leading informant David Norris (a different individual to the David Norris later convicted for the murder of Stephen Lawrence), whom at some point in 1989-91 Veness had gone to meet in person to authorise the signing of payments.[30] Ian Crampton, one of the officers overseeing both the David Norris and Stephen Lawrence murder investigations, was godfather to one of Jarratt's sons. Jarrett was also later implicated in the smearing of Ali Dizaei, while he was answerable to Andy Hayman.[31]

Operation Athena was the name given to the strategic reponse of the Metropolitan Police's Racial and Violent Crime Task Force (headed by Dept Assist. Commissioner John Grieve) in the wake of the Macpherson report into the Stephen Lawrence murder.[32] Part of this was Operation Athena Tower, which targeted suspects in the murder. Veness played a role in this particular operation in the years 1999-2003, including sanctioning the bugging of one of the accused and insertion of an undercover officer to target him.[33] He seems to have taken a close interest in this project, appearing as a source in a 2001 paper on hate crime.[34]

However, as head of Specialist Operations, Veness was (through Bob Lambert) in the chain of command for the placing of Peter Francis and undercover officer N8I targeting the Lawrences[35], whilst simultaneously helping the anti-corruption drive targeting a number of officers around the Lawrence inquiry.[36]

As part of his counter-terrorism work following the September 11 attacks, Veness developed a keen interest in the Muslim community. In particular, from 2001-03, he or his deputy regularly chaired meetings of the monthly Muslim Safety Forum (MSF). As a forum it allowed leading representatives of the Muslim community in London to meet with senior officers from the Metropolitan police and ACPO. From 2002, The MSF was also regularly attended by Bob Lambert and others of the "counter-terrorism focused" Muslim Contact Unit (MCU) (then part of Special Branch, which Veness oversaw).[37] From an article written by Lambert on the MSF, it appears that Lambert and Veness were in close contact at this point:

...Veness emphasized on the small MCU team the importance of investing time at MSF meetings, ("be the first to arrive and the last to leave")...[37]

Centre for the Study of Terrorism and Political Violence

The Metropolitan Police area and the City of London are exemplary in terms of the good relations which exist and are developing between the business community and the police. It has been David Veness, Assistant Commissioner for Specialist Operations at the Met, who brought the two together.[51]

On 24 June 2008, Veness resigned his position after the publication of an inquiry into the suicide bombing of the UN office in Algiers on 11 December 2007 that killed 17 UN staff. The inquiry had found that the bombing came after numerous internal UN warnings about a terrorist attack by the al-Qaeda affiliate in the Maghreb. Veness stated that he 'was willing to shoulder full responsibility for any security lapses' that preceded the bombing.[54]

Veness subsequently joined in 2010 the Chertoff Group,[55] a US based firm working in the intelligence, security and risk management industries. Its directors and advisors lists some of the highest ranking former US government officials from intelligence and security agencies.[56] On the board with him is former Home Secretary and Minister of Defence, John Reid. Also associated with this company is Graham Carvell Love, the former CFO of Defence Evaluation and Research Agency, and CEO of QinetiQ. Their UK offices are based at 33 St James Street, London.[57]

He is also chairman of the Security & Resilience Advisory Board at London First, a business lobby organisation.[58] His role includes promoting relationships between police and large business, and disseminating police security alerts.[59] A colleague on this board is Andrew Trotter who had been deputy and subsequently succeeded Ian Johnston as Chief Constable of the British Transport Police.[60]

In addition to that, Veness is one of the founders[61] and Co-Chair of the Executive Board of Cross Sector Safety & Security Communications, set up in June 2011 "by a team of senior security experts, with the aim of building a platform to facilitate communications between private and public sector on issues surrounding security and business resilience." Originally set up to help business prepare for the Olympics in London, it is now a more permanent partnership between business, the Police and the Government in London.[62] One of the other trustees is Stephen Kavanagh, Chief Constable Essex Police, with whom Veness shares a history of counter terrorism tasks, undercover operations and involvement in the MacPherson inquiry into the Stephen Lawrence murder.[63]

In March 2014, Veness joined the Pilgrims Group, "a security, risk management and service support company that identifies and manages risks," according to its website. "Our expertise allows your business to operate and develop, unhindered and unrestricted."[64]. Pilgrims provides training and security to government bodies, NGOs and private companies in countries including the UK, USA, Iraq, Afghanistan, Nigeria, Algeria, Somalia, Libya, Yemen, Syria, Pakistan and Kuwait. As a Senior Advisor to the company, "Sir David’s knowledge of how markets are affected by global terrorism and his experience of policing and international staff safety and security at the highest level will be invaluable to our strategic planning and is set to further benefit our clients across all sectors."[65]