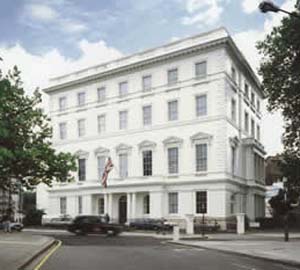 The Royal College of Defence Studies is part of the UK Defence Academy. It was founded in 1927 as the Imperial Defence College and was chiefly concerned with defending the British Empire. Today it defines its mission as to

I also states it aims:

"To prepare senior officers and officials of the United Kingdom and other countries and future leaders from the private and public sectors for high responsibilities in their respective organisations, by developing their analytical powers, knowledge of defence and international security, and strategic vision"[2].

The College runs one course a year, from January to December. Each course is attended by a maximum of 88 Members, around one-third from UK and two-thirds from overseas. Seventy-five per cent are military officers and the remaining 25 per cent are civil servants, diplomats, police officers and representatives from the private sector[3].

A BBC Panorama programme found that Perence Shiri, who led the force that committed the most serious crimes against humanity in Zimbabwe, took up a place at The Royal College of Defence Studies. Commander of the 5th Brigade, Shiri led the force that claimed thousands of civilian lives in Matabeleland between 1983 and 1984[5].

A warm welcome, please, to 12 high-ranking Chilean officers, led by Brigadier General Navarrete, who are visiting Britain as the government's guests. Loyal servants of President Pinochet, they were given a party earlier this week by Lord Trefgarne, junior Armed Forces Minister. The top brass are all attending the Chilean National Academy of Political and Strategic Studies and, in addition to visiting the Civil Service College and the Royal College of Defence Studies, are calling in on various British companies.[6]

Ending a five-day European tour to win support for President Reagan's Star Wars anti-missile system, Defense Secretary Caspar Weinberger today delivered a confidential address to specialists at the Royal College of Defense Studies. No details of Weinberger's speech to about 80 military and diplomatic officials were immediately dis-closed. Only its title was revealed: 'U.S. Strategic Thought.'[7]

Over the years, India's military chiefs have modernized their forces and bought much advanced military hardware from a number of Western powers as well as the Soviet Union. Although the biggest supplier of armaments to New Delhi is Moscow, military experts here say the two countries do not have reciprocal train-ing programs. India, however, still maintains links with Britain and regularly sends officers to the Royal College of Defense Studies.[8]

Domkat Yah Bali, Minister of Defence and chairman of Joint Chiefs of Staff in the government of military dictator Ibrahim Babangida in 1985 and Minister of Defence under Buhari. trained at the Royal Military Academy, Sandhurst, in 1962-63, and completed a gunners' course on Salisbury Plain. He later returned to the UK for courses at Camberley and the Royal College of Defence Studies.[9] | Robert E. Barbour, of Tennessee, a career member of the US Senior Foreign Service, former Ambassador to the Republic of Suriname. 'attended the Royal College of Defence Studies in London from 1972 to 1973'.[10] | Alastair Buchan 1st civilian Commandant of Royal Coll of Defense Studies[11] | Martin Kenneth Ewans, member of the 'senior directing staff' 1977-1983 and 'veteran British diplomat and Foreign Office official'[12] |

P N Marsden appointed Rear-Admiral and Senior Naval Member of the Directing Staff Royal College of Defence Studies in July 1985.[16] | Robert Moss, Visiting Lecturer 1971-80 | Pervez Musharraf, Was trained at the college and is a "regular visitor"[17] |