Defence Academy of the United Kingdom

The UK Defence Academy provides Higher Education for personnel in the British Armed Forces, Civil Service, Other Government Departments and service personnel from other nations.

The Defence Academy is headquartered at Shrivenham, Wiltshire and delivers education and training in a number of sites. The majority of training is postgraduate with many courses being accredited for the award of civilian qualifications.

The formation of the Defence Academy consolidated education and training delivered by a number of different establishments into a single organisational and budgetary structure, intended to improve efficiency, reduce duplication of effort and align delivery to defence requirements. The Defence Academy is also responsible for the maintenance of relationships with the UK academic establishment and with military and naval service educational institutions worldwide.

Non technical research is carried out for the development of doctrine and analysis of the international security environment.[1] 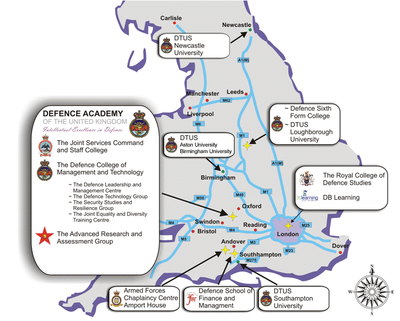 The Locations of the Defence Academy

Training is delivered by:

Research is carried out by:

The Location of the Defence Academy, near Swindon

The Director of the Defence Academy is a 3 star rank (Vice Admiral, Lieutenant-General, Air Marshal) position which can be filled by any of the three Armed Services.

DDA chairs the Defence Academy Management Board which is comprised the Commandants of the constituent delivery units and Chief of Staff, Defence Academy who also serves as Commanding Officer, Shrivenham Station.

The Management Board report to a Four Star Steering Board and an Advisory Board including academic expertise from the private sector and academia. A customer board at Two Star level represents the customer community.

Facilities management is provided through a Public Private Partnership arrangement with Serco Defence and Aerospace.