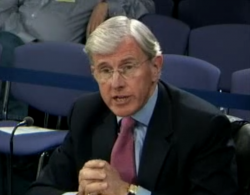 who was Director General of the Defence Academy. He served in the army for over 40 years, with tours of duty in Northern Ireland, the Falkland Islands, Bosnia and Iraq.

Kiszely was assistant chief of the defence staff at the Ministry of Defence from 1998 until 2001, when he became deputy commander of NATO Forces in Bosnia.

From 2002 until 2005 he was commander of regional forces in the UK, and also deputy commander of Coalition Forces in Iraq from 2004-5.

In 2012, Kiszely was one of several retired senior army officers targeted in a sting operation by Sunday Times journalists posing as representatives of a Korean drone manufacturer.[1]

Kiszely reportedly told undercover journalists that Babcock International was bidding for £4.35 billion in regional prime contracts to manage Ministry of Defence (MOD) properties, and that while MOD was supposed to be 'in purdah', he had managed to schedule a meeting with two Brigadiers involved. He also claimed to have introduced Babcock to General Sir David Richards, General Sir Peter Wall, and General Sir Nick Parker, and that clients benefitted from his friendship with Armed Forces Minister Andrew Robathan.[2]

Kiszely reportedly told the Sunday Times, that his role at the Royal British Legion enabled him to secure meetings with armed forces minister Andrew Robathan and to lobby the prime minister at remembrance events.[3]

After being confronted by the Sunday Times, Kiszely claimed he had not raised Babcock or the Regional Prime contract with the brigadiers.[4] he said he had never "used access gained in my legion role to raise the subject of, or discuss, any business interests whatsoever, let alone to make representations on behalf of clients."[3]

Kiszely resigned as head of the Royal British Legion the day after the Sunday Times report. [5]

The statements made by Sir John Kiszely, in the course of his attempt to win a job elsewhere, do not reflect his role for us. The facts are that he was not recruited to perform any lobbying role; he has never been asked to perform such a role and indeed, irrespective of his comments, he has never performed any such role for this Company.
We have a very clear code of conduct for all of our employees, and these inaccurate comments clearly fall foul of our code. For this reason, Sir John will not continue to work with Babcock.