Memorial Institute for the Prevention of Terrorism

The Memorial Institute for the Prevention of Terrorism (MIPT) is a think-tank conceived in the aftermath of the 1995 Oklahoma Bombing. It is funded through the Office for Domestic Preparedness (ODP) in the Department of Homeland Security and has links to the Rand Corporation and numerous other corporate security companies. The institute was closed down in August 2014 having 'lost its federal funding from the U.S. Department of Homeland Security' in September 2013.[1] As a result, 'it was forced in late 2013 to relocate to Rose State College from its original offices in the same building as the Oklahoma City National Memorial & Museum.'[1] 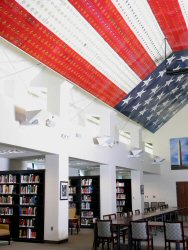 The Terrorism Memorial Flag at the MIPT's Terrorism Information Center

programs for those afflicted by other tragedies.[4]

The Memorial Centre was scheduled to be completed on 19 April 2000; the fifth anniversary of the bombing.

In 1999 State Governor Frank Keating appointed a board of directors for the Institute[5] consisting of a mix of military and corporate personnel. It comprised of Don Ferrell as Chairman, a former newspaper publisher whose daughter died in the bombing;[6] Cheryl Vaught of the Oklahoma law firm Vaught & Conner; Linda Edmondson, wife of Oklahoma’s Attorney General; Debby Goodmam, a Professor at the University of Oklahoma, Edward Keller, a former Chairman of J.P. Morgan; Edwin Coor, a retired US diplomat; David Cid, a security consultant and former FBI agent; Al Goodbary, Oklahoma State University’s director of military relations; and Mike Carolina, a telecommunications executive and adjunct professor at Oklahoma State University.

In 2001 the MIPT appointed former army chief of staff Dennis Reimer, as executive director. Reimer was paid over $150,000 a year for the role and directed MIPT until May 2005, when he was replaced by MIPT's Deputy Director, the former diplomat and government counter-terrorism expert Donald Hamilton. In July 2003 Hamilton took a one-year leave of absence from MIPT to serve as a senior counsellor to CPA administrator Paul Bremer.[8]

Judging by MIPT’s website and its tax returns, the activities of the Institute combine those typical of a think-tank, a Foundation, and a business consultancy. The Institute houses experts who conduct research on and promote particular issues; it has substantial funds which are allocated to private and public research institutes; and it offers corporate development and training programmes such as ‘Crisis Management’, or ‘Organizational Development’. On the last area it even advises businesses on mangerial changes. One publication states that “MIPT can help you implement sustainable change in your organization” and summarises what it calls the six stage ‘change cycle’.[9]

Former Board Members and Staff

The Institute has received substantial government funding and has also allocated significant amounts to universities and private research institutes and corporations. Below are two tables. The first shows the funding received by MIPT 2000-06, and the second shows the amounts granted to other institutions from 2001-06 (no such funds were awarded in 2000). An interesting feature of the former, is that in 2005 when public financial support was at its lowest, the government finance reached its peak – perhaps suggesting the propaganda value of the Institute. Both these tables are based on the information provided in MIPT’s tax returns, the original documentation of which is also below.