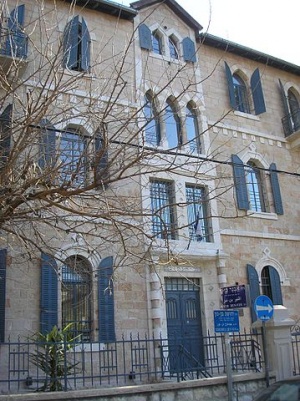 The Shalem Center in Jerusalem at 13 Yehoshua Bin-Nun Street

The Shalem Center was founded in Jerusalem in 1994 'with the aim of developing ideas capable of sustaining and unifying the Jewish people, and enriching and strengthening the State of Israel.'[1]

The Shalem Centre was involved in lobbying the Knesset in favour of enacting a law establishing a national memorial day for Theodor Herzl, the founder of modern political Zionism.[2] It assisted in drafting 'the Herzl Law' which was passed in June 2004.[3] In 2006 president and co-founder of the centre Daniel Polisar was appointed to the National Herzl Council, an official state committee responsible for commemorating Herzl's legacy through implementing the provisions of the law and carrying out research projects related to his life and memory.[4]

Funding of City of David excavation

Between 2005-8 Shalem sponsored senior fellow and archeologist Eliat Mazar's excavations of a site in East Jerusalem just outside the Old City which she believed to be the ancient palace of King David. The dig was also supported by Susan and Robert Hertog, chairman of the Tikvah Fund[5] who pledged to give $500,000 to the project. The site is located in the Palestinian Wadi Hilweh neighbourhood of Silwan and is seen by some as a means to strengthen Israel's control of East Jerusalem[6]. Robert Hertog, asked by the Washington Post if he contributed in the hopes of enhancing Israel's claim to East Jerusalem, said that it "was not the most significant" reason.[7]

The project was jointly funded by right-wing settler organisation Elad Association[8], instrumental in the Judaization of East Jerusalem[9], who also own the land in question.

Having taught a variety of short courses since 2005[10] in April 2009 the centre filed an application with the Council for Higher Education in Israel for the opening of an American-style liberal arts college authorized to grant B.A. degrees, to be called Shalem College.

President-designate Martin Kramer has said that establishing the college, explicitly Zionist in nature, had been "an aspiration since the center's inception", and stressed its importance, adding: "In a way, the Shalem Center was the interim framework established until a kind of critical mass and reputation were achieved that would allow this step [founding the college]."[11]

The long term raison d'etre of the college is to counter challenges facing Israel, from "the specter of a nuclear Iran" to "an increasing campaign of international delegitimization" but in particular the "growing number of Israeli and Jewish youth [who] do not believe in the justness or feasibility of a Jewish and democratic state", seen as an internal challenge even greater than the rest.[12]

Shalem College is expected to open in autumn 2012 [13] with the first intake of students to commence studies in 2013. It will begin with 50 to 100 students and ultimately plans to enroll 1000 undergraduates and up to 200 graduate students.[14] Undergraduates will study 4-year course rather than the usual three.[15]

The centre wants to raise $70 million to fund its establishment and the college will be entirely privately funded, receiving no money from the state.[16]

According to a Jerusualem Post article, "the Shalem-Princeton connection runs deep." The centre's founders included a number of Princeton University graduates, among them Yoram Hazony and Daniel Polisar, and others like Michael Oren and Martin Kramer have worked at Shalem at various points.[17] Hazony, Polisar and Joshua Weinstein met as students at the university.[18]

In 2009 the centre filed an application to establish Shalem College an American-style liberal arts college able to grant B.A. degrees intended to "cultivate a cadre of broadly-educated, committed citizen leaders for the Jewish state and the Jewish people"[20]

In 1991 Hazony, Polisar and Weinstein obtained the initial funding of a few thousand dollars, from Barry Klein, to set up the Shalem Center Association.[27]In May 2005 the Las Vegas-based Adelson Family Foundation announced that the Shalem Center in Jerusalem was to receive a $4.5 million grant to enable creation of the Adelson Institute for Strategic Studies, which Sharansky heads and in which Ya'alon is a "distinguished fellow."[28][29] Initial funding also came from Ronald Lauder[30], chairman of the centre's Foundation Board, while he was chairman of the Conference of Presidents of Major American Jewish Organizations and he reportedly gave "a few hundred thousand dollars a year".[31]

According to an article published in 2007 in Haaretz, the Tikvah Fund founded by Zalman Bernstein had for some years "provided the center with more than $5 million a year".[32] Barbara and David Messer are listed alongside the Tikvah Fund as major donors to the center. Other supporters include The Koret Foundation, the Gilbert and Elisa Palter[33], the Israeli Leadership Council, the Beker Foundation, Paul Singer and the US State Department.[34]

Since 2007 the centre has run a summer internship programme mostly attended by North American students. The 2012 intern programme received an endowment from the J Richard and Dorothy Shiff Family (Toronto) Programme[35]. In previous years the Leichtag Foundation of San Diego has covered the costs.[36]

Between 2006-11[37] the Shalem Centre publishes the quarterly journal Azure: Ideas for the Jewish Nation issued in Hebrew (under the name Techelet) and English. Notable contributors included former Shalem Center fellows such as Israeli Ambassador to the US Michael Oren, jurist Ruth Gavison and Hillel Neuer of UN Watch. It has published several articles critical of anti-Zionism and post-Zionism.[38][39][40]

From 2004 until 2006[41] Shalem also published a peer-reviewed journal "dedicated to reevaluating the nature and scope of the Jewish contribution to the core ideas of Western civilization", called Hebraic Political Studies.[42]

In 1997 a publishing house Shalem Press was established which specialises in translating "classics from the Western tradition" into Hebrew. Its first translation was The Road to Serfdom by Friedrich Hayek, known for being a major proponent of free market economics.[43] Other titles it has translated include Samuel Huntington's Clash of Civilizations which became a bestseller in Israel.