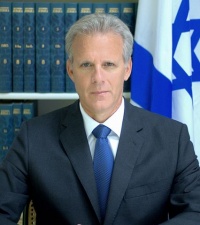 Michael Oren is a former Israeli ambassador to the United States. He was appointed ambassador by Prime Minister Benyamin Netanyahu on May 3 2009 and had to give up his United States citizenship in order to assume the post.[1] He ceased to hold this role on 30 September 2013 and was succeeded by Ron Dermer.

He is currently Abba Eban chair in international diplomacy in the Lauder School of Government at Interdisciplinary Center Herzliya.

Previously he was a professor at the School of Foreign Service at Georgetown University and a distinguished fellow at the Shalem Center in Jerusalem.[2]

Following Israel's incursion into Gaza in December 2009, Oren was called up as an IDF reservist to do public relations work.[3]

On 4 January 2009 he co-authored a Los Angeles Times opinion article on the conflict with Yossi Klein Halevi, a senior fellow at the Adelson Institute for Strategic Studies of the Shalem Center. His role with the IDF was not mentioned in the piece.[4]

On 20 December 2013 he wrote an article for Politico magazine entitled 'Will Congress Stand Up For Academic Freedom?' in support of a bill seeking to penalise organisations supporting the boycott, divestment and sanctions (BDS) movement against Israel.[5]