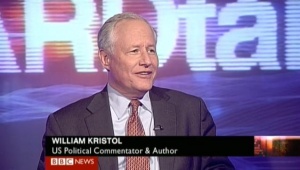 William Kristol on the BBC's Hardtalk programme in May 2010.

William (Bill) Kristol (born on December 23, 1952) is a political commentator and editor of the neoconservative Weekly Standard.[1] He was a prominent supporter of the war against Iraq[2]. He also supports the campaign against Iran[3]. He is the editor of the political magazine The Weekly Standard and the chairman and co-founder of the Project for the New American Century (PNAC), which advocates American military dominance worldwide.

Kristol is the son of Irving Kristol (one of the founders of the neoconservative movement) and Gertrude Himmelfarb.

Kristol is a political contributor for the FOX News Channel (FNC) and serves as a regular contributor to Special Report with Brit Hume. In December 2007, The New York Times offered Kristol space for a weekly column in its OpEd pages.

Born into a Jewish family in New York City, Kristol graduated in 1970 from The Collegiate School. In 1973 he received a B.A. from Harvard College and in 1979 a Ph.D. in government, also from Harvard.

Project for the Republican Future

Kristol first made his mark as leader of the Project for the Republican Future, a conservative think tank, and rose to fame as a conservative opinionmaker during the battle over the Clinton health care plan. In his first strategy memo circulated among Republican policymakers, Kristol said the party should "kill", not amend or compromise on, the Clinton health care plan. The success of the Clinton proposal, he warned, would “re-legitimize middle-class dependence for ‘security’ on government spending and regulation,” and “revive ... the Democrats, as the generous protector of middle-class interests.”[4]

Kristol's memo immediately became important in uniting Republicans behind total opposition to Clinton's reform plan. A later memo advocated the phrase There is no health care crisis, which Senate Minority Leader Bob Dole used in his response to Clinton's 1994 State of the Union address.

After the Republican sweep of both houses of Congress in 1994 Kristol established, along with neoconservative John Podhoretz and with financing from Rupert Murdoch, the neo-conservative periodical The Weekly Standard.[5]

Kristol was one of the signatories to the January 26, 1998, PNAC letter[6] sent to President Bill Clinton urging him "to seize that opportunity" in his upcoming State of the Union "to enunciate a new strategy that would secure the interests of the U.S. and our friends and allies around the world. That strategy should aim, above all, at the removal of Saddam Hussein's regime from power."

He was "one of the architects of the blueprint for regime change found in the [September 2000] document[7] 'Rebuilding America's Defenses: Strategies, Forces and Resources for a New Century'"[8]

Kristol said in a 14 January 2003, PBS Frontline interview "that the significance of President George W. Bush's State of the Union address in 2002 (the 'axis of evil' speech) is too easily forgotten -- that it was a rare moment, 'the creation of a new American foreign policy' -- and that Bush deserves credit for realizing very quickly after Sept. 11 that his presidency would be judged by how he handled the post-9/11 threat of weapons of mass destruction."[10]

Kristol is co-author with Lawrence F. Kaplan of The War Over Iraq: Saddam’s Tyranny and America’s Mission.

Most recently he has been a vocal supporter of the Israeli attack on Lebanon, stating that the war is "our war too," referring to the United States. He continues to back the Iraq war, and favors a war with Iran.[11]

In 1997, he founded, with Robert Kagan, the Project for the New American Century (PNAC). He is also a member of the neo-conservative think tank the American Enterprise Institute which provides office space to PNAC and from which the Bush administration has borrowed over two dozen members to fill various government offices and panels. Kristol is a patron of the British think tank the Henry Jackson Society, based at Cambridge.

Kristol has not always fallen in line behind the Bush administration, and has on occasion criticized Bush for not being conservative enough. In 2004, he wrote an op-ed strongly criticizing Secretary of Defense Donald Rumsfeld.[12] He was also the first of many conservatives to publicly oppose Bush's second U.S. Supreme Court nominee, Harriet Miers. He said of Miers: "I'm disappointed, depressed, and demoralized. [...] It is very hard to avoid the conclusion that President Bush flinched from a fight on constitutional philosophy. Miers is undoubtedly a decent and competent person. But her selection will unavoidably be judged as reflecting a combination of cronyism and capitulation on the part of the president."

He is currently a visiting professor at Harvard University where he teaches at the Kennedy School of Government. In addition to his role as a political contributor on FOX News, Kristol was for a time a semi-regular guest on the now cancelled World News Tonight on Sky News, appearing live from the US.

In November 2002, Kristol, as Chairman of the Bioethics Project of the New Citizenship Project, attended the Third Annual Siebel Scholars Conference which addressed stem cell research at Stanford University/Stanford Engineering at Palo Alto, CA.[13] Kristol has written against the form of stem cell research that involves human embryos.[14]

On 2 January 2, 2007, David Corn of The Nation posted a list of Mr. Kristol's pre-Iraq war statements "about the justification for the war, the costs of the war, the planning for the war, and the consequences of the war."[16] All the statements listed have since been shown to be wrong, leading Mr. Corn to conclude that "Kristol displayed little judgment or expertise...In an effectively functioning market of opinion-trading, Kristol's views would be relegated to the bargain basement."

On 29 December 2007, the New York Times announced that Kristol would write a regular column fot the NYT Op-ed pages. Howard Friel had this to say about the appointment:

Just in time for election year, the New York Times announced on December 29 that it had hired William Kristol as an op-ed page columnist, with the first column scheduled to appear on January 7, 2008. The Times’ editorial page editor Andrew Rosenthal, responding to early critics of the move, said that the Times “is giving voice to a guy who is a serious, respected conservative intellectual—and somehow that’s a bad thing. How intolerant is that?” Since Kristol already has his own magazine (Weekly Standard) and a regular seat among the talking heads on TV (Fox News), it’s hard to identify any public interest served by “giving voice” to him in the Times, and thus rehabilitate a serial advocate of lawless global conduct by the United States.
…
Given this context, if Andrew Rosenthal were in fact motivated by hiring an unrepresented point of view at the Times, he could have hired someone who opposed the invasion of Iraq—before the invasion was launched—on grounds that it violated the UN Charter and other major sources of international law. At least two officially retired but still-active professors come to mind—Noam Chomsky and Richard Falk. But since it’s the Times that has a “fear of opposing views”—including an apparent fear of the UN Charter—Rosenthal hired Kristol instead, probably to offset the editorial page’s now more aggressive criticism of the Bush administration.
So what is the difference between the Times and William Kristol, who still supports the Iraq invasion? The difference is that the Times “was for it before it was against it.”[3] That’s not much of a difference, given that, once you’re for it, and it happens, it’s too late to be against it.[17]

Jim Lobe commented on the appointment:

The New York Times’ decision to add Bill Kristol to its stable of weekly columnists seems pretty shocking to me and not only because Kristol, as pointed out by Josh Marshall, has virtually charged the Times with treason. As the main foreign policy muse of David Brooks — call him Kristol-Lite — Kristol was already communicating his views on the Times op-ed page quite effectively, I thought.[18]

Statements and testimony by Bill Kristol