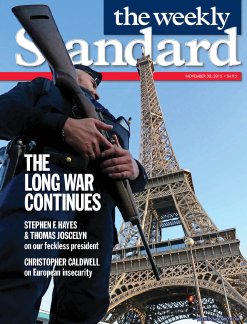 Weekly Standard, a US neoconservative magazine

The Weekly Standard magazine is the mouthpiece for neoconservatives, and one of the most influential publications in Washington under the Bush Administration. [1]. The magazine is edited by William Kristol, chairman of the controversial Project for the New American Century and son of leading neoconservative Irving Kristol.

Founded in 1995 by Rupert Murdoch's News Corporation, the Weekly Standard states on its website that "more than 65,000 politically active Americans nationwide receive the magazine each week". [2] Dwarfed by its primary competitor, the conservative National Review (circulation 155,000), the Weekly Standard nonetheless influences conservatives and neoconservatives alike through a massive Internet presence. [3] On its website, the Weekly Standard states that "before breakfast on Mondays, 4,000 requested copies of The Standard are delivered – also by hand - to every Member of Congress, to Congressional committees, and to federal agencies throughout the city." [4]

In 2003 William Kristol explained that "we have a funny relationship with the top tier of the administration. They very much keep us at arm's length, but Dick Cheney does send over someone to pick up 30 copies of the magazine every Monday." [5]

Eric Alterman, writing in The Nation magazine, described this presence as

"Reader for reader, it may be the most influential publication in America. Their circulation may be small but they are not interested in speaking to the great unwashed. The magazine speaks directly to and for power. Anybody who wants to know what this administration is thinking and what they plan to do has to read this magazine." [6]

Like National Review in the administration of Ronald Reagan, it was very popular among George W. Bush's administration. According to Vanity Fair (July 2003; as quoted by Ben Bagdikian in The Media Monopoly|The New Media Monopoly), the Office of Vice President Dick Cheney alone receives a special delivery of 30 copies. The magazine's sway over the Bush administration is evident from the fact that Donald Rumsfeld was ejected shortly after William Kristol called for his resignation multiple times in the magazine.

In 1997, the Weekly Standard became one of the first publications to publicly call for regime change in Iraq. Presently it leads the campaign for regime change in Iran. While the Bush administration has assiduously followed its hardline prescriptions, the publication is not averse to excoriating him wherever it feels the administration has stepped out of line. When Bush failed to intervene in time to the neoconservating "Scooter" Libby, Jim Lobe reporte,

Kristol excoriated Bush, even questioning his manliness (See Kristol’s teacher on the subject, Harvey Mansfield), for not pardoning Scooter Libby “So much for loyalty, or decency, or courage,” Kristol charged. “For President Bush, loyalty is apparently a one-way street; decency is something he’s for as long as he doesn’t have to take any risks in its behalf; and courage – well, that’s nowhere to be seen. Many of us used to respect President Bush. Can one respect him still?” Less than a month later, the president commuted Libby’s sentence so he didn’t have to spend even a single day in prison.[7]

Writing in the American Conservative, Scott McConnell, stated that when the Weekly Standard started up in 1995, it did so "thanks to a $3 million annual subsidy from Rupert Murdoch". (McConnell does not indicate what the source of the subsidy estimate is). [8]

In 2003 the New York Times reported that "executives said The Weekly Standard was losing a little more than a million dollars a year". [9]