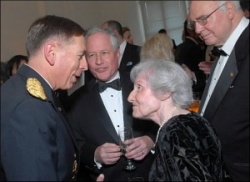 Gertrude Himmelfarb (born August 8, 1922) is an American neoconservative historian and cultural critic. She is the wife of neoconservative godfather Irving Kristol, mother of William Kristol, the cofounder of Project for the New American Century and sister to the late Milton Himmelfarb of the American Jewish Committee. She is now Professor Emeritus of the Graduate School of the City University of New York. She married Irving Kristol in 1942, but has always written as an academic under her unmarried name. [1]

The intellect on display here is about the caliber of the village biddy who sticks her blue nose into everyone else's business, offering opinions nobody asked for about how everybody else should live. Like ‘99 Bottles of Beer,’ the tune Himmelfarb sings throughout One Nation, Two Cultures is repetitive and seemingly endless, and you always know exactly what's coming next. It's that golden oldie, top of the pops on the conservative hit parade for the umpteenth era in a row, baby! – ‘America Is Going to Hell in a Handbasket (And It's All the Fault of the '60s).’ What did conservatives do before they had the '60s to blame? It's been such a boon to them that, secretly at least, they must be grateful for it (the way liberals have always been grateful for Nixon). When Himmelfarb writes, ‘Whatever cultural revolution America experienced in the 1920s or before, it was a faint foreshadow of what was to follow,’ she's using a Saturday-afternoon serial technique, keeping us hooked before unveiling the dastardly scheme that Ming the Merciless has in store. She doesn't take long to get to the wicked plot: the destruction of the Victorian virtues of ‘work, thrift, temperance, fidelity, self-reliance, self-discipline, cleanliness, godliness’ (in her view, America's traditional strengths) by the Kryptonite of the '60s. [2]