Shalem College is a project of the Shalem Center and will be Israel's first US-style liberal arts college, educating students to become future Israeli leaders. The college is expected to open in autumn 2012 [1] with the first intake of students to commence studies in 2013. It will begin with 50 to 100 students and ultimately plans to enroll 1000 undergraduates and up to 200 graduate students.[2] Undergraduates will study 4-year course rather than the usual three.[3] The centre wants to raise $70 million to fund its establishment. The college will be entirely privately funded, receiving no money from the state.[4] The college is based at Kiryat Moriah on the site of an Arabic college which was part of the demilitarised zone at the 1949 armistice. In other words, Shalem College is in the occupied territories in contravention of international law.

President-designate Martin Kramer has said that establishing the college had been an aspiration since the Shalem Center's inception, and stressed its importance, adding: "In a way, the Shalem Center was the interim framework established until a kind of critical mass and reputation were achieved that would allow this step [founding the college]."[5]

Israel's Council for Higher Education accredited the college in January 2013.[6]

Because existing Israeli universities are perceived by Shalem as "less successful in inspiring today’s young people with a sense of mission and broad vision", the college is "designed to produce innovative civic leaders and strategic thinkers who will ascend to positions of real influence in all sectors of Israeli life."[7] Shalem literature about the planned college states: "In today’s increasingly post-national world, Israel faces an internal threat stemming from the growing loss of conviction on the part of its young people regarding the justness of its founding and the legitimacy of its continued existence as a Jewish state".[8]

It cites "the specter of a nuclear Iran and an increasing campaign of international delegitimization" as threats to Israel but believes an even greater internal challenge is the "growing number of Israeli and Jewish youth [who] do not believe in the justness or feasibility of a Jewish and democratic state". Shalem states that this phenomenon is resulting in a 'brain-drain', "growing avoidance of army service, and a widespread disdain for government and the political system at large."[9] The college's raison d'etre is explained as a counterbalance to this:

If this trend continues, Israel may well lose the fight — not to its enemies, but on account of negligence and sheer indifference. To ensure its survival and success, Israel needs not only a skilled military, a strong economic base, and highly trained technocrats. It also needs a cadre of visionaries."[10]

The academic content will "rigorously combine the wealth of Jewish and Zionist tradition with classical Western thought through the ages" and a major part of the curriculum "reflects the needs of contemporary Israel"[13]. Teaching staff will represent "the entire political spectrum of Zionism."[14]

The lecturers listed as the college's founders are all reportedly sharp critics of 'leftist' intellectual approaches. One academic involved, Professor Yoav Gelber, told Haaretz the humanties in the Israel academy are "in crisis" partly because "[t]hey teach all the post-modern silliness."[15] President-designate of the college Martin Kramer said the college will not become "yet another home for scholars who have made their reputations by negating the Zionist and Israeli narrative".[16] He has stated that the centre will recruit faculty members "whose values commit them to the Jewish people and to the State of Israel - the vessel for Jewish survival. Yet this will not be a school for the indoctrination of Zionism."[17]

As well as academic ability, the admission will be based on "exceptional intellectual and extracurricular interests and talents, rich backgrounds in volunteer activities, and demonstrated leadership and dedication in frameworks such as the Israel Defense Forces and national service." To recruit students for its inaugural year Shalem will meet with "dozens of individuals who are influential in affecting decisions by top students regarding their choice of college or university, including heads of pre-army preparatory institutes, high school principals, officers in the elite army units that attract the most gifted and motivated young people, and others."[18] 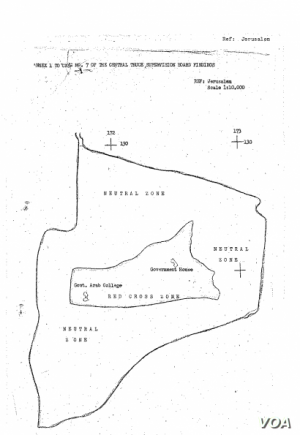 The college campus is located 'on the ground's of Jerusalem's Kiryat Moriah educational complex'[20] which is a Jewish Agency building for 'Jewish Zionist education'.[21]. College president Martin Kramer described the building as merely 'an initial home' for the college.[22]

According to the Jewish Telegraphic Agency 'In Mandatory times the site was an Arab teachers’ seminary.'[23] The area os the college was in the vicinity of Government House built by the British in 1933 'to serve as the headquarters of the British High Commissioner who ruled the then-British Mandate of Palestine.'[19] When Britain 'ended its rule of Palestine on May 14, 1948, it withdrew from Government House and handed the keys to the Red Cross, which a day earlier had declared a Red Cross Zone around the site. The rectangular-shaped area was meant to be a safe haven for refugees from the war'[19]

This area included the buildings and grounds of the Arabic college, which is the site of the development of Shalem College. The sketch maps from the Israel state archives and a screengrab from Google maps indicates that the college was inside the original Red Cross area as well as within the expanded demilitarised area agreed between the warring parties in 1949.[19] 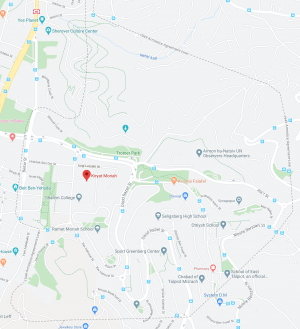 Screenshot from Google maps showing Shalem College on the site of Kiryat Moriah. Note that Armon ha-Natsiv U.N Observers Headquarters is just above and to the right. This was the site of Government House the headquarters of the British High Commissioner until the British withdrew in 1948. The 1949 armistice line can be seen surrounding the area delineating the demilitarised zone declared by the Red Cross in 1948. Screengrab captured 27 February 2020.

In June 2008 the Klarman Family Foundation of Boston and George and Pamela Rohr of New York each made a commitment of $1 million in support of establishing a liberal arts college at the Shalem Center.[24]

In February 2010 the Conduit Foundation based in Chicago, USA, announced a $5 million donation towards the Shalem College. Betsy Brill of the Conduit foundation said the planned college "reflects our foundation’s vision, which is the continuity of the Jewish people and the sustainability of Israel as a Jewish state."[25]

In summer 2010 Shalem received $2 million to endow the first chair of the Shalem College. An "anonymous donor from England" gave $1 million and the Conduit Foundation gave the other half.[26]

In May 2011 the New York-based Tikvah Fund - the Shalem Centre's "most generous" donor for over a decade according to Yair Shamir, chairman of the Shalem Foundation Board - pledged to match donations up $12.5 million received over the first 4 years after the establishment of the Shalem College.[27]

Shalem is in the process of acquiring Section 46 certification for Israeli tax deductible status, which will allow it "to more aggressively target Israeli philanthropy in support of the College".[28]

David Newman, a professor of politics at Ben Gurion University, has claimed that groups monitoring Israeli universities such as IsraCampus and Israel Academic Monitor are attempting to influence the recruitment of staff by calling for donor boycotts of universities seen to be harboring anti-Zionist professors - such as Ben Gurion and Haifa University - exercising leverage at a time when many Israeli universities are struggling with large debts. Newman believes such groups hope to redirect donations to right-wing academic institutions and think tanks, such as the Shalem Centre and Ariel College, located in a West Bank settlement near Nablus.[29]