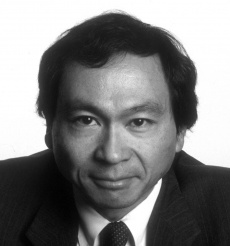 Francis Fukuyama is an American academic and author who is best known for his book The End of History and the Last Man.[1]

Fukuyama is best known as the author of The End of History and the Last Man, in which he argued that the progression of human history as a struggle between ideologies is largely at an end, with the world settling on liberal democracy after the end of the Cold War and the fall of the Berlin Wall in 1989. Fukuyama predicted the eventual global triumph of political and economic liberalism:

What we may be witnessing is not just the end of the Cold War, or the passing of a particular period of post-war history, but the end of history as such... That is, the end point of mankind's ideological evolution and the universalization of Western liberal democracy as the final form of human government.[2]

He has written a number of other books, among them Trust: The Social Virtues and the Creation of Prosperity and Our Posthuman Future: Consequences of the Biotechnology Revolution. In the latter, he qualified his original 'end of history' thesis, arguing that since biotechnology increasingly allows humans to control their own evolution, it may allow humans to alter human nature, thereby putting liberal democracy at risk. One possible outcome could be that an altered human nature could end in radical inequality.

The current revolution in biological sciences leads him to theorize that in an environment where science and technology are by no means at an end, but rather opening new horizons, history itself cannot therefore be said to be, as he once thought, at an end.

In another work The Great Disruption: Human Nature and the Reconstruction of Social Order, he explores the origins of social norms, and analyses the current disruptions in the fabric of our moral traditions, which he considers as arising from a shift from the manufacturing to the information age. This shift is, he thinks, normal and will prove self-correcting, given the intrinsic human need for social norms and rules.

As a key Reagan Administration contributor to the formulation of the Reagan Doctrine, Fukuyama is an important figure in the rise of Neoconservatism. He was active in the Project for the New American Century think tank starting in 1997, and as a member co-signed the organization's letter recommending that President Bill Clinton support Iraqi insurgencies in the overthrow of then-President of Iraq, Saddam Hussein[3]. He was also among forty co-signers of William Kristol's September 20, 2001 letter to President George W. Bush after the September 11, 2001 attacks that suggested the U.S. 'capture or kill Osama bin Laden, and to destroy his network of associates', and 'provide full military and financial support to the Iraqi opposition' for the purpose of removing Saddam Hussein from power 'even if evidence does not link Iraq directly to the attack.'[4]

Beginning in 2002, however, he has distanced himself from the neoconservative agenda under the Bush Administration, citing its overly militaristic basis and embrace of unilateral armed intervention, particularly in the Middle East. By late 2003, Fukuyama had voiced his growing opposition to the Iraq War[5] and called for Donald Rumsfeld's resignation as United States Secretary of Defense.[6] He said that he would vote against Bush in the 2004 election.[7]

Fukuyama's current beliefs include the following:

Just as every other country does, the US has a right to promote its own values in the world, but more along the lines of what he calls "realistic Wilsonianism", with military intervention only as a last resort and only in addition to other measures. A latent military force is more likely to have an effect than actual deployment. The US spends more on its military than the rest of the world put together, but Iraq shows there are limits to its effectiveness. The US should instead stimulate political and economic development and gain a better understanding of what happens in other countries. The best instruments are setting a good example and providing education and, in many cases, money. The secret of development, be it political or economic, is that it never comes from outsiders, but always from people in the country itself. One thing the US proved to have excelled in in the aftermath of WW2 was the formation of international institutions. A return to support for these structures would combine American power with international legitimacy. But such measures require a lot of patience. This is the central thesis of his most recent work America at the Crossroads: Democracy, Power, and the Neoconservative Legacy (2006).

In an essay entitled "After Neoconservatism" in the New York Times Magazine in 2006 that was strongly critical of the US-led invasion of Iraq,[9] he identified neoconservatism with Leninism. He wrote that the neoconservatives

believed that history can be pushed along with the right application of power and will. Leninism was a tragedy in its Bolshevik version, and it has returned as farce when practiced by the United States. Neoconservatism, as both a political symbol and a body of thought, has evolved into something I can no longer support.[10]

In "After Neoconservatism", Fukuyama announced the end of the 'neoconservative moment' and argued for the demilitarization of the war on terrorism:

"War" is the wrong metaphor for the broader struggle, since wars are fought at full intensity and have clear beginnings and endings. Meeting the jihadist challenge is more of a 'long, twilight struggle' whose core is not a military campaign but a political contest for the hearts and minds of ordinary Muslims around the world.[11]

In an article in The Sunday Times, Fukuyama is quoted as saying that the so called creation of democracy in Iraq cannot "justify the blood and treasure that the United States has spent on the project".[12]

If he has distanced himself from the label of neoconservatism, he nonetheless remains indebted to the thought of Leo Strauss, one of the founding intellectual fathers of neoconservatism, for much of the theoretical basis of his ideas on political economy. In his essay, "Our Posthuman Future", he adopts a Straussian perspective in his defence of the classical doctrine of natural right. He says his argument is Aristotelian and that

Aristotle argued, in effect, that human notions of right and wrong – what we today call human rights – were ultimately based on human nature.[13]

In August 2005, Fukuyama – together with a number of other prominent political thinkers – co-founded The American Interest, a quarterly magazine devoted to the broad theme of "America in the World". The editorial tone of the publication is largely bi-partisan and is an attempt to transcend the polemical discourse that dominates discussions of contemporary American foreign policy.[14]

Fukuyama is a Fellow of the World Academy of Art and Science (WAAS).

Fukuyama is on the steering committee for the Scooter Libby Legal Defense Trust.[16] Fukuyama is a long-time friend of Libby. They served together in the State Department in the 1980s.

is a member of advisory boards for the National Endowment for Democracy (NED), The National Interest, the Journal of Democracy, and The New America Foundation. As an NED board member, he is responsible for oversight of the Endowment's Middle East programs. He is a member of the American Political Science Association, the Council on Foreign Relations, the Pacific Council on International Policy, and the Global Business Network.[17]

Fukuyama is married to Laura Holmgren. They live in suburban Washington, DC with their children.[18]