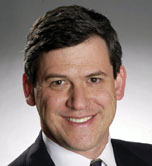 Daniel Benjamin is Director of the Center on the United States and Europe at the Brookings Institution. He is a former journalist and White House advisor and is considered an expert on jihadist terrorism.

Benjamin graduated from Harvard College in 1983 and was awarded an M.A. by Oxford University in 1985. Below is a summary of Benjamin's carrer from the Brookings Institution[1]: