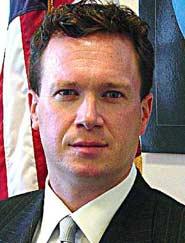 Cressey received his B.A. in Political Science from the University of Massachusetts at Lowell in 1987 and a M.A. in Security Policy Studies from George Washington University in 1991.[1] He has taught a graduate course on U.S. counter-terrorism policy at Georgetown University,[2] where he is currently an adjunct professor.[3]

Cressey worked at the Department of Defense, including as Deputy Director for War Plans. From 1991-1995, he served in the Department of State working on Middle East Security issues. He has also served overseas with the US Embassy in Israel and with United Nations peacekeeping missions in Somalia and the former Yugoslavia.[4]

He was Chief of Staff to the President's Critical Infrastructure Protection Board at the White House from November 2001 to September 2002. From November 1999 to November 2001, he was Director for Transnational Threats on the National Security Council staff, where he was responsible for coordination and implementation of US counterterrorism policy. During this period, he managed the U.S. Government's response to the Millennium terror alert, the USS COLE attack, and the September 11th attacks.[5]

Cressey has been a foreign policy advisor to Barack Obama but not exclusively.[6]