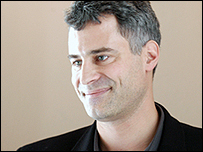 Alan B Krueger is an American economist who has written studies on the economic aspects of terrorism. He is Bendheim Professor of Economics and Public Affairs at Princeton University.

Since 1987 he has held a joint appointment in the Economics Department and Woodrow Wilson School at Princeton University. He is the founding Director of the Princeton University Survey Research Center and a Research Associate of the National Bureau of Economic Research and of the Institute for the Study of Labor (IZA)...He is a member of the Board of Trustees of the Russell Sage Foundation and of the Board of Directors of the American Institutes for Research. He is a member of the editorial board of Science, and was editor of the Journal of Economic Perspectives from 1996 to 2002 and co-editor of the Journal of the European Economic Assocaition from 2003-05. In 1994-95 he served as Chief Economist at the U.S. Department of Labor. He is currently a member of the Executive Committee of the International Economic Association and serves as chief economist for the National Council on Economic Education. He was named a Sloan Fellow in Economics in 1992 and an NBER Olin Fellow in 1989-90. He was elected a Fellow of the Econometric Society in 1996, a fellow of the Society of Labor Economists in 2005 and a member of the Executive Committee of the American Economic Association in 2004. He was awarded the Kershaw Prize by the Association for Public Policy and Management in 1997 (for distinguished contributions to public policy analysis by someone under the age of 40) and Mahalanobis Memorial Medal by the Indian Econometric Society in 2001. In 2002 he was elected a fellow of the American Academy of Arts & Sciences, and in 2003 he was elected a fellow of the American Academy of Political and Social Science. He was awarded the IZA Prize in Labor Economics with David Card in 2006. From March 2000 to March 2006 he was a regular contributor to the "Economic Scene" column in the New York Times.[2]