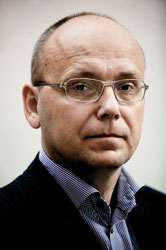 Magnus Ranstorp is a Swiss born terrorism expert who emerged from the Centre for the Study of Terrorism and Political Violence at the University of St. Andrews. He is currently Chief Scientist at the Centre for Asymmetric Threat Studies at the Swedish National Defence College. He was CNN's principal consultant on terrorism before and after 9/11 [1] and in 2004 was referred to by The Herald as, "the most quoted British academic in the United States." [2]

Ranstorp has been associated with Paul Wilkinson since at least September 1990 when he was reportedly present at a London conference organised by the Research Institute for the Study of Conflict and Terrorism. [3] Ranstorp studied his PhD under Paul Wilkinson in the early 1990s. His thesis 'Radical Shi'ism in Lebanon: Western government crisis management techniques in dealing with hostage incidents, 1982-1992' was published by the University of St Andrews in July 1995. After completing his thesis Ranstorp joined the University and its Centre for the Study of Terrorism and Political Violence, established in 1994. When Paul Wilkinson stepped down as Director of CSTPV , Ranstorp was appointed Acting Director and then briefly Director from early to mid 2005. [4]

Dr Magnus Ranstorp, another key CSTPV figure (currently also a Chief Scientist at the Swedish National Defence College) provided much of the thinking behind the government initiatives that followed the Madrid bombings. It was he who popularised the concept of a "terrorist career path" that begins with spiritual training and progresses to terrorism through exposure to "propaganda" about struggles in places such as Algeria and Chechnya. So Muslims who find the whole of their spiritual, social and political life under scrutiny from the intelligence services have Dr Ranstorp to thank.[5]

John Upton wrote an article for the London Review of Books in 2004 which stated that Ranstorp, then head of CSTPV, "regularly briefs senior government and security officials overseas and in the UK – among them, Assistant Commissioner David Veness". [6]

Ranstorp has a page on the social networking site Facebook.com. His listed friends include Bruce Hoffman [7] founder of CSTPV who is now at Georgetown University, Peter Neumann [8] of Kings College London who Directs the International Centre for the Study of Radicalisation and Political Violence, and Neal Pollard [9] founder of the Terrorism Research Center.