IGas Energy Ltd is Britain's largest independent oil and gas explorer and developer, with licences to explore for oil and gas across the country including the North West, East Midlands, the Weald Basin in southern England and the northern coastal area of the Inner Moray Firth in Scotland. [1]

Shale gas a 'game-changer' for Britain 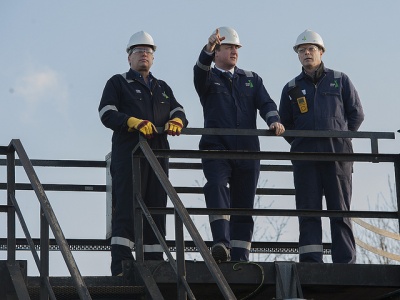 In 2014 IGas was pushing the line that shale gas would be a 'game-changer' for Britain, and that it could be 'extracted cleanly and safely'.

Igas chief executive at the time Andrew Austin described his hopes for UK fracking as 'a very big prize' - whereby in the 'best-case scenario' up to 10 per cent of the UK's gas supply for the next decade could come from shale gas produced in Lincolnshire and Nottinghamshire.

IGas was already producing conventional oil and gas in the area, and said it hoped to develop up to 15 fracking sites in 10 years.[2]

In May 2014 IGas bought rival producer Dart Energy, which holds licences to produce gas from coal seams in Scotland. The deal, worth £120 million, made IGas the UK's biggest shale gas explorer at the time, with more than a million acres under licence.[3]

In February 2014 Barbara Keeley, UK Labour MP for Worsley and Eccles South criticised IGas's potential fracking site at Barton Moss in Salford, Greater Manchester as 'manifestly unsuitable', with drilling there causing 'absolutely huge inconvenience' to residents and businesses. She also described the process of 'fracking' - exploring below the surface for possible shale gas reserves - as "controversial and untested".

Keeley, in an interview with Govtoday, insisted the scheme should "never have been brought into that part" of the region, adding: "If you think that there are meant to trillions of cubic metres of shale gas said to be in the north-west, why start in an urban area with very poor access?" [4]

In March 2015 IGas agreed a deal with chemicals giant Ineos to sell it a 50 per cent interest in seven of IGas’ shale gas licences in the North West along with the option to acquire a 20 per cent interest in two further IGas licences in the East Midlands. The deal was worth £30 million in cash and a further £138 million commitment to fund a two-phase work programme to develop the sites. [5]

By December 2018, however, IGas had announced that its drilling tests at Tinker Lane failed to find the target Bowland Shale. It said it would therefore abandon and restore the well site.

Test drilling at IGas' Springs Road site has been more successful according to an early February 2019 press release:

Drilling operations at Springs Road-1 are progressing well. We have encountered shales on prognosis, at c.2,200 m, including the Bowland Shale horizon and coring will commence imminently. The rate of drilling at Springs Road has been quicker than anticipated, building on our learnings and operating efficiencies from Tinker Lane and augurs well for the future. [7]

Progress on the drilling was included in the IGas chairman's statement in its FY2018 results released in March 2019:

We mobilised the equipment to Springs Road in early January 2019 and spudded the well on 22 January 2019. In mid-February, we encountered shales on prognosis, at c.2,200 metres depth and drilled through a hydrocarbon bearing shale sequence of over 250 metres, including the upper and lower Bowland Shale. TD has been reached at 3,500 metres after encountering all three targets – Bowland Shale, Millstone Grit and Arundian shales. Significant gas indications were observed throughout the shale section and additionally within the Millstone Grit sequence and the Arundian shale. The cores and wireline logs will now undergo a suite of analysis, the first results of which should be available in the second quarter of 2019." [8]

On 27 June 2019 Igas CEO Stephen Bowler told investors in a statement that results from the Springs Road SR-01 well, which was drilled as a vertical, cored well in PEDL140 in the centre of the Gainsborough Trough basin, were 'highly promising' and a “step forward for shale gas development in the East Midlands”. He said the core analysis confirmed 'a significant hydrocarbon resource'. [9]

Igas has long enjoyed direct access to the UK government's senior ministers and officials. Press and photo opportunities as part of the shale gas industry's push to get fracking going in the UK included former prime minister David Cameron visiting an Igas site in 2014 (above right), and former Defra minister Andrea Leadsom. 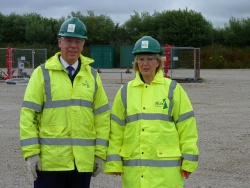 Energy minister Claire Perry hosted a roundtable with the fracking industry just hours before she gave evidence to a committee of MPs on the Conservative government's proposed changes to relax the rules on shale gas development in the UK. The purpose of the meeting was 'to discuss the future of the Shale Gas Industry' according to the ministerial meetings disclosures published by BEIS. [10] 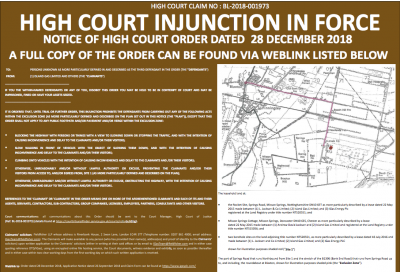 Igas Energy's shale gas plans have been met with extensive protest in the both areas it proposes to work in and operates. Following INEOS' successful applications for anti-protest SLAPP style injunctions against public protest, on 3 September 2018 IGas obtained a High Court injunction against 'unlawful protest' at three of its main shale gas exploration sites[13] (Springs Road and Tinker Lane in Nottinghamshire and Ellesmere Port in Cheshire).

The interim injunction was renewed in the High Court in London on 28 December 2018 (right) by HHJ Simon Barker QC.

IGas claims the order ‘doesn’t prevent anyone effectively exercising their rights to freedom of assembly and freedom of expression’. Restrictions prohibited "trespass on IGas’ land, unlawful interference with access to IGas’ land, and obstruction of the highway – including slow-walking, lock-walking, lock-ons and truck surfing". Any activists disobeying the injunction may be held to be in contempt of court and subject to prison, fines or seizure of asset. .[14]

In June 2019, community campaigners learned that policing at two IGas shale gas sites, Tinker Lane and Springs Road near Misson, in Nottinghamshire had cost £900,000 up to April 2019 - nearly 0.5% of the Nottinghamshire force’s entire spending on policing services for 2017-2018. However, the Police and Crime commissioner's office told Drill or Drop that it would not be seeking reimbursement for the costs, which were below the Home Office threshold. [15]

“Apart from the financial impact, the imposition of the fracking industry upon our community has led to the diversion of police resources away from their duties of serving and protecting the communities who pay for them. Council taxpayers and local businesses have had to contend with increasing levels of crime and anti-social behaviour, whilst dozens of police are deployed at the behest of a private corporation to facilitate the unjustifiable extraction of fossil fuels.” 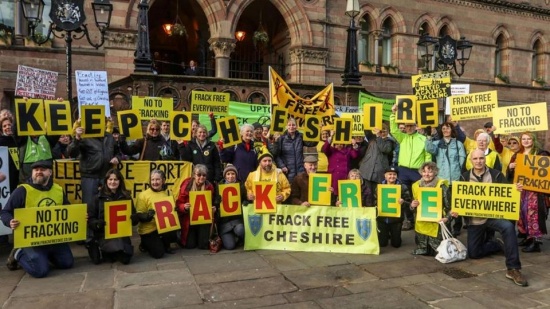 Igas is appealing against the council's refusal and claims it does not intend to use hydraulic-fracturing at Ellesmere Port.

An 8-day public inquiry held in Chester in January 2019 heard evidence from expert witnesses on the potential health and social impacts of IGas' proposed operations at the site. DrillorDrop reported that Professor Andrew Watterson of Stirling University, giving evidence on behalf of Frack Free Ellesmere Port and Upton (FFEP&U), argued Igas was using the 'absence of evidence' as evidence of absence.' "Nothing in the IGas appeal documents deals effectively with public health objections to the proposal,” he said. The campaigners also believe that while IGas' claims that it will not frack at Ellesmere Port, 'the proposed use of acid to stimulate gas flow meets the council’s local definition of fracturing'.

“From a public health and air quality impact perspective, the IGas proposal does not appear to demonstrate sustainable development but rather the opposite. Not all the project hazards were initially identified or have been fully now. The effects of these hazards combined, and with other hazards in the area, has not been fully factored into risk assessments of human health.”

Professor Watterson explained that IGas had also not fully considered the vulnerability of the local population of Rossmore and Ellesmere Port Town, one of the country's most deprived areas. According to campaigners, the site, called Portside, is at the heart of their community - within 1km of new homes, a children’s play centre and a nature reserve. Just over 1km away is a residential home, schools and tourism attractions reported DrillorDrop. [17]

Another expert witness, academic Dr Anna Szolucha, said IGas 'had a poor record of public engagement', with many residents regarding local consultations as inadequate, also perceiving the IGas scheme as 'unfair' and that 'any potential economic benefits would not compensate for potential adverse impacts'. These communities, she argued, were experiencing 'a collective trauma' and 'felt powerless, depressed, with a sense of loss, fear, betrayal, guilt and anger'. [18]

The 12-day Cheshire public inquiry ended in early March 2019. In June however, it emerged that the Planning Inspectorate had delayed its decision following the government's climate change advisor recommendation for a greenhouse gas reduction target of net zero by 2050. It told Drill or Drop:

“The decision [on the Ellesmere Port inquiry] had to be postponed to seek comments/representations following the Government’s Climate Change Committee’s net-zero report published in May. These comments will now be considered by the Inspector and a revised date for issuing the decision will be made as soon as possible”. [19]

In June 2019 It was announced that the final decision on Igas' appeal against the planning permission refusal by Cheshire West and Chester Council would now be made by the local government secretary James Brokenshire. The inspector's decision would be only a recommendation.

In July 2019, however, the Planning Inspectorate said the decision report by the inspector would take another seven months, with a deadline now set for 23 January 2020. 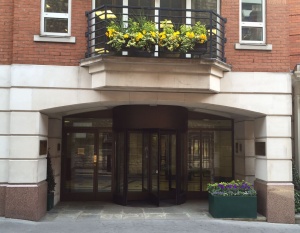 IGas produced approximately 3,000 barrels of oil and gas a day from over 110 sites across the country in 2013. Primary production areas covered the East Midlands (Welton and Gainsborough), Cheshire, Flintshire and Staffordshire, as well as in the Weald Basin in southern England. At the time, IGas estimated that within its own licence area, covering 300 square miles between Manchester and Liverpool, there is likely to be in the region of 102 Tcf of gas in place (midcase). Britain’s total gas use currently runs at 3 Tcf a year.[1]

The well is now suspended and 'full laboratory analyses of the cores is underway the results of which are expected in the late Autumn (2014). The results from the core analyses together with thewireline log data will be integrated and utilised to determine the next steps in the appraisal process. The core data will be very beneficial in understanding the geomechanical aspects of the shales and this will help provide key data to optimise the design of any future programme involving hydraulic fracturing of the Bowland Shale. 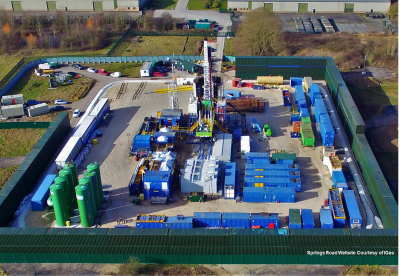 IGas started commercial sales of electricity generated from CBM in 2009. According to the IGas website:

The Doe Green pilot Coal Bed Methane (“CBM”) site continues to produce gas and generate electricity. All three production wells, each of which is testing a separate seam, demonstrate that gas is flowing from the seams. [21]