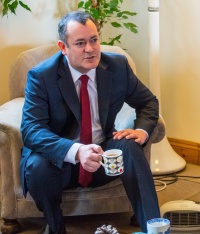 Michael Dugher has been the Labour Party MP for Barnsley East since 2010 and vice-chairman of the Labour Party. [1] He was appointed a shadow defence minister in 2010, and a shadow minister without portfolio in the Cabinet Office since 2011.[2] Before that, he was parliamentary private secretary to the leader of the opposition, Ed Miliband, and was shadow minister for defence equipment, support and technology.

In the 2015 general election, Dugher retained his seat with a majority of 12,034 over closest competitor Robert Swiffen of UKIP. [3]

As of September 2015 he has been appointed the Shadow Culture Secretary in the wake of the 2015 leadership election. [4]

Michael worked at 10 Downing Street as chief political spokesman for the then Prime Minister Gordon Brown. He previously worked as a special adviser in a variety of Government roles, including: Transport, Local Government and the Regions; Defence; for the Leader of the House of Commons; and for the Government Chief Whip.

Prior to working in government, he was head of policy for the AEEU Engineering Union (now Unite). Michael is still a member of Unite and also a member of Britains biggest trade union Unison. [5]

Dugher is the manager of Andy Burnham's campaign to become Labour Party leader. He will be joined by Luciana Berger, Owen Smith and Lord Falconer.[6]

In October 2015, Dugher signed a letter in The Guardian along with more than 150 people drawn from the arts and politics. The letter launched Culture for Coexistence, an organisation that opposes the Boycott, Divestment and Sanctions movement.[7]

In August 2015, Dugher called for moratorium on fracking in his constituency and nationally, saying:

'This Government seems prepared to push ahead with fracking at any cost and once again it sees the north of England as a soft touch. But the potential benefits of shale gas can’t come at the expense of environmental protection or our climate change commitments [...] I support my constituents and people across the country who have genuine safety and environmental concerns about fracking. It should be local people – not Ministers in Whitehall – who have the biggest say'. [8]

In September 2015, he wrote an article presenting the 'case against' fracking, in which he says:

'The government needs to be honest with people and weigh any potential economic benefits against the costs to the local economy and to local residents.'

'Given all this uncertainty, the Government should call a halt to fracking before irreversible damage is done . But instead of calling a fracking moratorium, gathering clearer evidence on the impacts of fracking and listening to the genuine concerns from people across Yorkshire, the Government is now trying to stifle any local opposition.'

'My strong contention is that the siting for potential fracking has everything to do with politics and little to do with economics. You can’t build so much as a shed in the south of England without provoking the rage of nimby Conservative councils or MPs. Yet Tory ministers are content to give the green light to massive fracking in the North. [9]

In February 2016, Dugher met with head of operations at INEOS Tom Crotty to re-state his opposition to fracking in Barnsley, and asked for a full programme of consultation with local residents. He also met with representatives for Cuadrilla for the same purpose. [10]

Dugher's constituency includes four oil and gas licence blocks, awarded by the Oil and Gas Authority under the 14th licensing round in 2015. Two were awarded to INEOS, one to Cuadrilla and one to IGas. There are plans for three shale wells, one hrz frac well and 2D and 3D seismic surveying; no applications are currently underway. [11]

Dugher has mostly been absent for votes on fracking. [12]