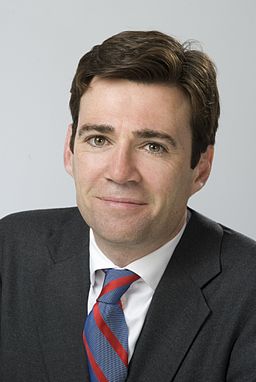 Andy Burnham is the Labour Party Member of Parliament (MP) for Leigh and the Mayor of Greater Manchester, in office since May 2017. He is a former special adviser to Labour Party's secretary of state for culture, media and sport Chris Smith.[1]

In September 2015 after losing out to Jeremy Corbyn in the Labour party leadership election Burnham was given the post of shadow home secretary.

Liverpool-born Burnham was educated at St Aelred's Roman Catholic High School in Merseyside and later gained an MA in English from Fitzwilliam College, Cambridge. He joined the Labour Party in 1984, during the miners' strike, aged 14.[2] From 1994 to 1997, Burnham worked as a Researcher to the MP Tessa Jowell. From August to December in 1997, he was Parliamentary Officer at the NHS Confederation and in 1998 started work as an administrator for the Football Task Force. From 1998 to 2001, Burnham was a special adviser to the former Secretary of State for Culture, Media and Sport Chris Smith. In June 2001, he was elected as the Labour MP for Leigh in Greater Manchester. His subsequent posts are as follows[3]:

In May 2010 Burnham announced he would stand in the Labour leadership contest following the resignation of Gordon Brown. He promised to put an end to 'stage managed' politics run by 'elites', adding 'I am a team-player; I've never had time for factions'.[6]

After Labour leader Ed Miliband resigned in May 2015, Burnham announced he would run again in the Labour leadership contest. [7]

Burnham appointed founder and managing director of Insight Consulting Group John Lehal as his campaign manager; Burson Marsteller lobbyist and former director of comms for Ed Miliband's leadership campaign, Katie Myler as director of communications; and Michael Dugher MP as his team chair.[8] Other backers include shadow health minister Luciana Berger, who focused on campaigns and engaging younger voters; shadow Welsh secretary Owen Smith, who focused on questions around the future of the UK; and the shadow justice secretary Lord Falconer.[9]