From Powerbase
(Redirected from Lord Mandelson)
Jump to: navigation, search 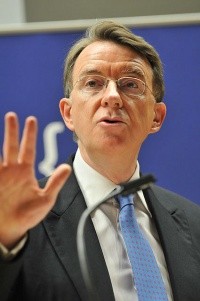 Peter Benjamin Mandelson (born 21 October 1953) was Secretary of State for Business, Enterprise & Regulatory Reform in the Labour Government from October 2008 until May 2010. In November 2010 he set up an international lobbying consultancy, Global Counsel LLP (backed by WPP, with his old political special adviser Benjamin Wegg-Prosser. [1]

Mandelson was Britain's Commissioner of the European Union for Trade from 2004 until 2008, and before that, a British Labour Party politician and Member of Parliament for Hartlepool (UK Parliament constituency) for 12 years. [2] He is widely regarded as one of the main architects of what became known as the New Labour Party. He was twice sacked as a cabinet minister in Tony Blair's government. Before Labour came to power, he was author (with Roger Liddle) of The Blair Revolution (1996); more recently he contributed to the book The City in Europe and the World (2005).

Mandelson pushes a neoliberal line in Brussels along with his key aide Roger Liddle. Speaking at a FAAP (Private University) Event on the Global Economy in Sao Paulo in March 2009, Mandelson demonstrated his continued commitment to the neoliberal project, claiming that "The basic value of open trade and the basic case against protectionism has not been damaged by the credit crunch, and it remains central to any chance of a sustained global recovery. The evidence is sitting around the G20 table. There is no G20 country that has not benefited from the expansion of trade and the creation of a global economy in the twentieth century." [3]

Mandelson was born in London in 1953, where his father was the advertising manager at the Jewish Chronicle. [4] On his mother's side, he is the grandson of Herbert Morrison, the London County Council leader, and Labour cabinet minister. [5]

He was educated at the County Grammar School at Hendon, (now Hendon School). In his youth, he briefly rebelled against his family's Labour tradition and in 1971 left the Labour Party Young Socialists (LPYS) to join the Young Communist League, then the youth wing of the Communist Party of Great Britain. This move was partly a result of disagreements with the Trotskyist Militant Tendency that had just won a majority in the LPYS nationally. He studied Philosophy, Politics and Economics at St Catherine's College, Oxford (1973-1976) [6] and, after returning to the Labour party, became director of the British Youth Council in the late 1970s. [7] He was elected to Lambeth Borough Council in September 1979, but retired in 1982, disillusioned with the state of Labour politics. [8]

He worked as a television producer with London Weekend Television on Weekend World, [9] forming a durable friendship with John Birt, then LWT's Director of Programmes, before his appointment as the Labour Party's Director of Communications in 1985. [10] In this role he was one of the first people in Britain to whom the term "spin doctor" was applied; during this period he acquired the nickname "The Prince of Darkness" (originally coined in the satirical magazine Private Eye). [11] In 1986 he ran the campaign at the Fulham by-election that saw Labour defeat the SDP. He managed Labour's widely admired but electorally unsuccessful 1987 general election campaign. [12]

Disappointingly for Mandelson, he had little influence over John Smith during his leadership of the Labour Party, although he made several notable speeches in which his strong support for the European Union was outlined. He was close to two Shadow Cabinet members, Gordon Brown and Tony Blair, who were both regarded as potential leaders. After Smith's sudden death in 1994, Mandelson decided to back Blair for the leadership and played a leading but secret role in the leadership campaign. This created lasting antagonism between Mandelson and Brown, who felt he had been betrayed. [13]

In December 1998 it was revealed that Mandelson had bought a home in Notting Hill in 1996 with the assistance of an interest-free loan of £373,000 from Geoffrey Robinson, a millionaire Labour MP who was also in the Government but was subject to an inquiry into his business dealings by Mandelson's department. [14] Given Mandelson's closeness to Tony Blair, this gave the appearance of buying favours. Although Mandelson had deliberately not taken part in any decisions relating to Robinson, he knew he should have declared the loan as an interest, and he was sacked on 23 December 1998. Mandelson had also not declared the loan to his mortgage company, [15] an offence under UK law, although they decided not to take any action. [16]

Mandelson was out of government for only ten months. In October 1999 he was appointed Secretary of State for Northern Ireland, replacing the popular Mo Mowlam after the peace process had stalled when some of the parties refused to continue to negotiate with her. In his very first speech in the post he made a gaffe by referring to himself as the "Secretary of State for Ireland."[17] Afterwards, he oversaw the creation of the devolved legislative assembly and power-sharing executive, and reform of the police service.

In January 2001, it was claimed that Mandelson had phoned Home Office minister Mike O'Brien on behalf of Srichand Hinduja, an Indian businessman who was seeking British citizenship, and whose family firm was to become the main sponsor of the "Faith Zone" in the Millennium Dome. At the time, Hinduja and his brothers were under investigation by the Indian government for alleged involvement in the Bofors scandal. On 24 January 2001, Mandelson was sacked from the Government for a second time, insisting he had done nothing wrong. An independent inquiry by Sir Anthony Hammond came to the conclusion that neither Mandelson nor anyone else had acted improperly. The front page headline in one of the newspapers at the time read 'Passport to Oblivion'. [18]

But the headline writers were somewhat premature. Mandelson was challenged by Arthur Scargill of the Socialist Labour Party and by another Left-winger at the 2001 general election, but was re-elected with a large majority. This prompted him to make an exuberant acceptance speech, which was televised live, in which he declared that "I am a fighter, not a quitter!" and referred to his "inner steel". Mandelson was much criticised for this speech which was widely regarded as inappropriate [19]

After the general election, Mandelson was chairman of the Policy Network and the UK-Japan Group, and was president of Hartlepool United FC. [20]

Despite his exoneration by the Hammond Inquiry, Mandelson's reappointment to the Cabinet seemed politically difficult. He indicated his interest in becoming the United Kingdom's European Commissioner when the new Commission was established in 2004 (both of Britain's incumbents, Neil Kinnock and Chris Patten, were standing down). [21] Appointment as a Commissioner would have required his resignation from Parliament and therefore a by-election in his constituency. While some were concerned that the seat would be difficult for the government to retain, Mandelson convinced his colleagues that Labour would perform well. [22]

His appointment was announced in the summer and Mandelson resigned his seat through appointment as Steward of the Manor of Northstead on 8 September 2004. His predictions about the state of play in the Hartlepool by-election proved accurate as Labour kept the seat with a majority of more than 2,000. [23] On 22 November, 2004, Mandelson became Britain's Commissioner of the European Union for Trade. [24] In April 2005, The Times revealed that Mandelson had spent New Year's Eve 2004 on the yacht of Paul Allen, the co-founder of Microsoft, which is at the centre of a major EU investigation, although it did not allege impropriety. [25]

Mandelson played an important role in negotiating an end to the dispute between the European Union and the People's Republic of China over textile imports in the summer of 2005, although it should be noted the solution, which involved tariffs and imports quotas, failed within its first two months (where textile retailers, knowing import limits were about to be introduced, had placed such large orders with Chinese producers that the entire annual import quota was exhausted in the first month of its operation and large volumes of orders were being held, indefinitely, in customs) and had to be re-renegotiated. [26]

A BBC profile of Mandelson says, "Peter Mandelson has won himself a place in the history books as the man who - along with Tony Blair and Gordon Brown - consigned the Labour Party to the dustbin of history and created New Labour." [27] In rebranding Labour as New Labour, the three architects moved the party's policy away from the Left, which may reflect their membership of the right wing, neo-liberal British American Project. They were originally invited to attend in 1983. [28]

As well as Mandelson's membership of the British American Project, he has also served as chairperson for a similar network between the United Kingdom and Japan, another global superpower. Called the UK-Japan 21st Century Group, it also brings together leaders in business and academia. [29]

Mandelson's office defended the amount of meetings by saying:

'Lord Mandelson often visits Brussels to discuss policy issues ranging from the current debate on Brexit through to global trade,” the statement said. “These subjects are clearly of interest to readers of Global Counsel’s research … and some clients. However, the meetings which Lord Mandelson had in Brussels were not used for commercial advocacy, as participants will confirm'.

On 16 June 2015 Mandelson again met with Selmayr. Selmayr brought along three other senior cabinet members, as well as Ann Mettler, who as head of the European Political Strategic Centre is one of Juncker’s most influential policy advisers. The reason for this meeting was listed as 'working dinner'.

Mandelson's Global Counsel has a number of EU clients including insurance firms, manufacturers and energy companies and Mandelson himself is a non-executive director of Russian conglomerate Sistema.[30]