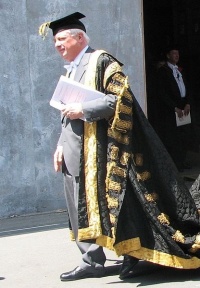 Chris Patten, Chancellor of the University of Oxford, exiting the Sheldonian Theatre 2009

Not to be confused with John Patten, Lord Patten.

Chris Patten, Lord Patten of Barnes, is a Conservative member of the House of Lords, appointed in 2005.[1]

Patten was Governor of Hong Kong in April 1992, a position he held until 1997, overseeing the return of Hong Kong to China. He was Chairman of the Independent Commission on Policing for Northern Ireland set up under the Good Friday Peace Agreement, which reported in 1999.

From 1999 to 2004 he was European Commission for external relations and in 2006 he was appointed co-chair of the UK-India Round Table.[3]

He was chairman of the BBC Trust from 2011 to 2014, after having to stand down due to having major heart surgery.[4]