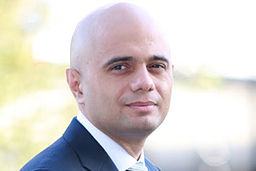 Javid was appointed home secretary in April 2018. He was previoiusly secretary of state for communities and local government, having been appointed by incoming prime minister Theresa May in her July 2016 cabinet reshuffle.[1]

Javid also served as culture secretary for a year from April 2014 and then business secretary from May 2015 until July 2016, when he replaced Greg Clark as communities secretary.

In that role Javid took over the responsibility for the appeal by fracking company Cuadrilla against Lancashire county council's rejection of its applications for exploratory drilling. Despite widespread protest by local communities in the region, Javid upheld the appeal on 6 October 2016, paving the way for shale gas production to start at Preston New Road in 2017.

Javid previously worked in business and finance. According to his government biography:

Aged 25, he became a vice president at Chase Manhattan Bank. He later moved to Deutsche Bank in London to help build its business in emerging market countries. Sajid left Deutsche Bank as a senior managing director in summer 2009 'to give something back through politics'.[5]

At Deutsche his boss was Conservative Party donor Rajeev Misra.[6]

On 9 February 2015, Javid attended the Conservative Party's 'Black and White Ball' election fundraiser at the Grosvenor Hotel in London. The event was attended by almost the entire Cabinet, Boris Johnson and George Osborne did not attend due to the G20 event, and by party donors including; hedge fund boss Stanley Fink (Lord Fink), who wants Britain to rival offshore tax havens with an equally generous tax regime; founder of Lycamobile, who paid no corporation tax between 2007 and 2014 despite generating millions in revenue, Subaskaran Allirajah; jewellery tycoon Ranbir Singh Suri and lap dancing club owner Peter Stringfellow.

To raise additional money at the event, the Party sold one-off prizes. These included, a meal at the Carlton Club with Javid, shoe shopping with Theresa May, dinner at home with Michael Gove and a session of jogging with Nicky Morgan.[7]

In 2014, after the resignation of Lord Patten as the chair of the BBC Trust, Javid nominated Rona Fairhead for the role, which was ultimately decided by Her Majesty the Queen.

'Her experience of working with huge multinational corporations will undoubtedly be a real asset at the BBC Trust.'

'I have no doubt she will provide the strong leadership the position demands and will prove to be a worthy champion of licence fee payers.

'I am sure that under Rona's leadership the BBC will continue to play a central role in informing, educating and entertaining the nation.'[11]

Fairhead was hired in the role but in 2015 her suitability was questioned due to her work with HSBC and the tax avoidance scandal.