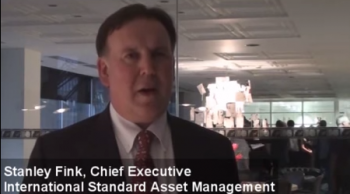 Stanley Fink, Baron Fink (born 15 September 1957) is a British hedge fund manager, the former CEO and deputy chairman of the Man Group.[1] He is one of the most respected names in the City, dubbed the ‘Godfather of hedge funds’ by the media.

In January 2009 he was appointed co-treasurer of the Conservative Party.[2] That same year he donated the party £1.65million to start an election fighting war chest.[3] He stepped down from this role in February 2012 to focus on his business interests and philanthropic work. He was replaced by Michael Farmer.[4] However, Fink was asked to step back into the role the following month amid a scandal caused by a 'cash for access' newspaper sting on co-treasurer Peter Cruddas, who resigned on 25 March 2012.

He is a Conservative peer of the House of Lords, having joined on the 18 January 2011.

Fink is a member of The Leader's Group, the premier Conservative Party supporter group. Through an annual membership fee of £50,000 donors are able to secure access to leading members of the party.

In a 21 year career with Man Group, Fink oversaw the transformation of the business from a medium sized private company largely focused on agricultural commodity trading to a world leader in alternative asset management. He stepped down as Chief Executive Officer of Man Group in March 2007 but remained on the Board as Deputy Chairman. He retired from the Board at Man Group’s AGM in July 2008.

In September 2008 he came out of retirement to act as Chief Executive of International Standard Asset Management (ISAM), an absolute return investment company incorporating specialist Macro and Gold funds.

Edelman’s London Office handled the appointment of Fink for ISAM.[5]

In September 2009 he became chairman of the hedge fund-backed Academy sponsor Absolute Return for Kids.[6]

According to The Jewish Chronicle, Lord Fink was a 'loyal donor' to Just Journalism, a pro-Israel media flak group linked to the Henry Jackson Society which closed in 2011.[7]

In October 2015, Fink signed a letter in The Guardian along with more than 150 people drawn from the arts and politics. The letter launched Culture for Coexistence, an organisation that opposes the Boycott, Divestment and Sanctions movement.[8]

In February 2015, Fink was named as one of clients of the Swiss branch of HSBC. He opened the accounts in 1996 and 1997 whilst on a four-year posting on Switzerland working at hedge fund the Mag Group. On the topic, Fink has said, “I was Swiss-resident … the only reasons I opened bank accounts in Switzerland was the ordinary management of my current affairs. To the extent I created any trust accounts, these were perfectly normal planning matters, and could have been set up with similar effect, without the Swiss bank being involved.” Most of the trusts were wound up when Fink finished his work in Switzerland, and he claims they were 'fully declared and tax paid on all the dividends they received'.[9]

In the House of Commons, Labour leader Ed Miliband made a claim that Fink had been avoiding tax with the use of these bank accounts. Fink threaten to sue Miliband if he repeated these claims outside of Parliament. Miliband repeated the claims and, however Fink revealed he will not be pursuing legal advice.[10]