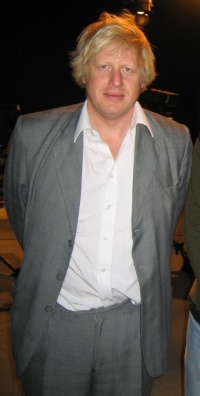 In 2015 he was elected as the Conservative MP for Uxbridge & Ruislip South with a majority of 10,695.[2] He was also announced in David Cameron's 'political cabinet' but without a government job as he devoted his attention to his final year as Mayor London.[3]

In July 2019 Johnson, won the Conservative contest to succeed Theresa May as British prime minister, 'taking over a country in crisis and a government on the brink of breaking down' according to Bloomberg News.

Boris Johnson was born on 19 June 1964 in New York, USA, educated at Eton, (King’s Scholar) and Balliol College, Oxford (Brackenbury Scholar in Classics).[4] The pollster Frank Luntz has claimed that while at Oxford Johnson touted himself as a supporter of the Social Democratic Party, then a dominant current at the university, as a strategy to win the Union presidency, though Johnson denies he was more than the SDP's preferred candidate.[5] Along with David Cameron he was a member of Oxford's Bullingdon Club, a student dining society known for its raucous feasts.[6]

He is the brother of Conservative MP Jo Johnson.[7]

Sacked by the Times

After graduating from Oxford University in 1987, Johnson became a trainee reporter with the Times newspaper but was sacked within a year for falsifying a quotation from his godfather Colin Lucas.[8]

Johnson's official biography on the London Mayor website in 2008 however stated:

After a short time as a writer for the Wolverhampton Express and Star, he joined The Daily Telegraph in 1987 as leader and feature writer. From 1989 to 1994 he was the Telegraph's European Community correspondent and from 1994 to 1999 he served as assistant editor. His association with The Spectator began as political columnist in 1994. In 1999 he became editor of the paper and stayed in this role until December 2005.[9]

In 2001 he was elected MP for Henley on Thames, replacing Michael Heseltine. He has held shadow government posts as Vice Chairman, Shadow Minister for the Arts and Shadow Minister of Higher Education. In July 2007, Boris Johnson resigned from his position as shadow education secretary so that he would be free to stand as Conservative candidate for Mayor London. He resigned as MP for Henley shortly after becoming Mayor of London.[10]

Sacked for lying about affair

Then Conservative leader Michael Howard sacked Johnson as shadow arts minister in 2004 for lying about an affair with Spectator journalist Petronella Wyatt.[11]

Political opponents questioned Johnson's judgement when Ray Lewis resigned on 4 July 2008, shortly after taking up his post, following allegations of financial misconduct during his prior career as a Church of England priest and inappropriate behaviour in respect of a false claim to have been appointed as a magistrate.[15] Johnson himself said that he was "misled" by Lewis.[16]

In the run up to the UK's referendum on membership of the European Union, Johnson came out sensationally in a Telegraph article on 16 March 2016 in favour of a Brexit vote on 23 June 2016. Johnson's argument is centred around the fact that the European project has morphed out of all recognition since its inception, and that its interests and the interests of Britain, which is coming into its stride economically and politically, are no longer aligned. He argued that the British offering to the world could be much improved from unshackling from our European partners, given the 'onslaught' that Brussels is making on the closely-held British values:

'We have given so much to the world, in ideas and culture, but the most valuable British export and the one for which we are most famous is the one that is now increasingly in question: parliamentary democracy – the way the people express their power.

This is a once-in-a-lifetime chance to vote for real change in Britain’s relations with Europe. This is the only opportunity we will ever have to show that we care about self-rule. A vote to Remain will be taken in Brussels as a green light for more federalism, and for the erosion of democracy.' [17]

Special advisers on the Register of interests 2016

Lobbying for The City

“The purpose of the lunch”, according to a letter from Johnson dated 21 December 2009, “is to discuss threats to London's competitiveness as a global financial centre”, as well as “to hear your concerns and suggestions, and to reassure you that we remain committed to doing all we can to ensure London retains its position.”[19]

Days before the lunch, Johnson had written to Goldman's Chair and CEO, Lloyd Blankfein, to restate his support for the City: “I will strongly defend London's financial services industry against the threats of punitive taxation and new burdensome EU regulations”, he wrote.</ref name="Spinwatch">

Details of the attendees and seating plans of the Conservative's 2013 summer ball, an event where tickets cost up to £12,000 each and allows attendees to sit at the table with ministers, were leaked by the Guardian. It revealed that Johnson shared a table with Andrei Borodin, an exiled Russian banker who is wanted by the Kremlin for an alleged £220m bank fraud, which he denies.[20]

Johnson, who has described wind farms as a'disease' blighting Britain's countryside, has vociferously backed the push for both nuclear and fracking in the UK. He first penned a column in 2012 in The Telegraph entitled 'Ignore the doom merchants, Britain should get fracking'.

Its strapline read:'It’s green, it’s cheap and it’s plentiful! So why are opponents of shale gas making such a fuss??[sic]'. In it he wrote:

in the region of Blackpool – as if by a miracle – we may have found the solution. The extraction of shale gas by hydraulic fracture, or fracking, seems an answer to the nation’s prayers. There is loads of the stuff, apparently – about 1.3 trillion barrels; and if we could get it out we could power our toasters and dishwashers for the foreseeable future. By offering the hope of cheap electricity, fracking would make Britain once again competitive in sectors of industry – bauxite smelting springs to mind – where we have lost hope.

The extraction process alone would generate tens of thousands of jobs in parts of the country that desperately need them. And above all, the burning of gas to generate electricity is much, much cleaner – and produces less CO2 – than burning coal. What, as they say, is not to like?

In their mad denunciations of fracking, the Greens and the eco-warriors betray the mindset of people who cannot bear a piece of unadulterated good news. Beware this new technology, they wail. Do not tamper with the corsets of Gaia! Don’t probe her loamy undergarments with so much as a finger — or else the goddess of the earth will erupt with seismic revenge. Dig out this shale gas, they warn, and our water will be poisoned and our children will be stunted and our cattle will be victims of terrible intestinal explosions. Yesterday the Observer found some political support for the gloomsters, in the form of a German MEP. His name is Jo Leinan, and it seems he is a prominent member of the Euro-parliament’s energy committee. There were only two countries interested in this procedure, he said – Poland and Britain.

And according to Herr Leinan, neither of us knows what we are getting ourselves into. We are about to release the pent-up shale gas of Britain from its sinister cavities beneath Lancashire and Sussex, and anything can happen. Before we touch the integuments of the planet, he says, the European parliament will produce some regulations to “discipline” the operation.

Regulations? From the Euro-parliament? And these people wonder why we in Britain are increasingly determined to have a referendum on our membership of the EU. I am sure that the SPD politician means well, but just what in the name of hell has it got to do with him? Before he draws up any regulations for the British fracking market, he might care to look at what has been going on in America in the past four years, where the discovery of large quantities of shale gas is turning into one of the most significant political events since the end of the Cold War.

Keeping the lights on

In July 2013 Johnson told The Times in his role as London Mayor that:

"If reserves of shale can be exploited in London we should leave no stone unturned, or unfracked, in the cause of keeping the lights on".

He did concede that this would not involve 'digging up Trafalgar Square' at least. [21]

Fracking is the answer, not fossil fuel divestment

In 2015 as London Mayor Johnson rejected a motion by the London assembly calling on City Hall to divest its £4.8bn pension fund from oil, coal and gas. He argued that a 'sudden cliff edge' divestment approach was not appropriate, and that we also needed to get fracking to avoid being reliant on the Middle East and Russia for gas. [22]

Johnson's Tory leadership campaign in 2019 received £25,000 in donations from a prominent climate change sceptic’s company, according to the register of MPs’ interests. First Corporate Shipping is the trading name of the Bristol Port Company, which is co-owned by Tory donors Terence Mordaunt and Sir David Ord. Mordaunt is a director of the Global Warming Policy Foundation[23] which has also pushed hard for the Government to change the earthquake tremor regulations restricting controversial fracking firm Cuadrilla's operations at Preston New Road in Lancashire.

Johnson reportedly received over $500,000 in donations between May and July 2019 during his successful campaign for leadership of the Conservative Party and to succeed Theresa May as prime minister. A chunk of this - £205,000 was received in just two weeks. Donations included: