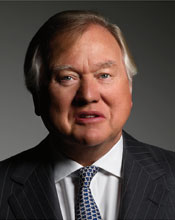 Anthony Bamford is an English businessman and chair of JCB, one of the world's top three manufacturers of construction equipment.

He is a member of the Midlands Industrial Council.

He is a donor to right-wing causes: he is one of the largest donors to the Conservative Party; has donated money to the Taxpayers' Alliance; and gave money to the campaign for the UK to leave the EU.[1] He is a board member of the Centre for Policy Studies. 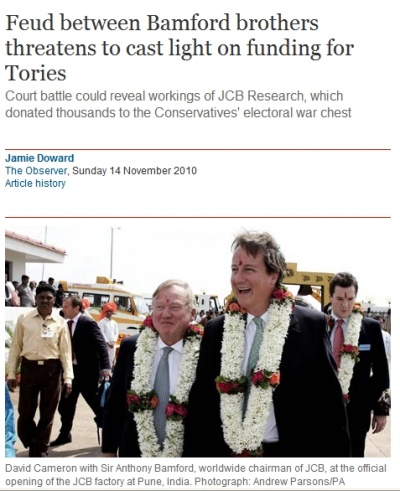 Bamford was raised to the peerage in August 2013.

Bamford is a Brexit supporter and gave £673,000 to the campaign for the UK to leave the EU, contributing to both the Vote Leave campaign and Grassroots Out through JC Bamford Excavators Limited.

As such, Bamford is a member of The Leader's Group, an elite Conservative Party supporter group which enables donors to secure access to leading party members and the prime minister through an annual membership fee of £50,000.[4] For example, he was a dinner guest of Prime Minister David Cameron in July 2010.

Bamford was knighted by the Conservative Government in 1990.[5] His name was withdrawn from a list of prospective Conservative peers in May 2010, amid claims that the decision was related to his tax affairs.[6]Three years later in August 2013 he was finally made a peer. [7]

The Independent reported in 2006:

"Anthony puts much of his success down to anti-union policies adopted at JCB over the years, and has spiritual reservations about Labour," says a political acquaintance. "But on a personal level, he finds Blair pretty charming, and is obviously happy with the direction he has taken the party in. It's a measure of the remarkable guy he is that he can be friends with Blair, Cameron, and the Prince of Wales, all at the same time."[5]

Bamford donated money to the successful No2AV campaign against reform of the UK's first-past-the-post voting system in 2011.

Bamford has financially supported the Taxpayers' Alliance, which campaigns for lower taxes.

In December 2005, Bamford was one of a number of prominent business-people who signed a letter to the Telegraph calling on Chancellor Gordon Brown to lower taxes.[9]

In addition to the Gloucestershire stronghold [1'700 acre Daylesford], there’s a London mansion; a 4,200-acre estate in Staffordshire, known as Wootton; Heron Bay, the fabled Barbados home once owned by Ronald and Marietta Tree; and Château de Léoube, in Provence. At sea and in the air they are no less pampered: There’s the Virginian, their 240-foot yacht previously owned by John Kluge; the private jet; and one of the biggest private helicopters in England, a Sikorsky S-76 (Anthony uses it to commute daily to his factory in Staffordshire).[10]

Bamford is the son of Joseph Cyril Bamford, who founded the excavation machinery business JCB in 1945. The firm prospered in the postwar boom.[5]

Bamford has a brother Mark Bamford, who is a director of eight companies within the JCB Group and sits on the board of the Conservative Party Foundation. [11]