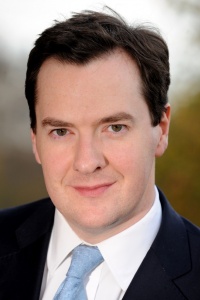 George Osborne was the Chancellor of the Exchequer from May 2010 to July 2016, having been replaced by Philip Hammond in Theresa May's first cabinet reshuffle.[1] He is now an adviser to the world's largest fund manager, BlackRock. [2]

After the 2015 election, he received the additional title of First Secretary of State.[3]

Osborne was David Cameron's campaign manager for the Conservative leadership. Like Cameron, he was elected in 2001 and became Shadow Chancellor at the age of 34. Osborne says that he is a 'card carrying Bush fan' and British neocon. He is on the Policy Advisory board of the Social Market Foundation.

A former public school boy and heir to the Osborne and Little wallpaper fortune, he says he has been a Conservative all of his life. He describes one of his earliest jobs in politics, as official Conservative Party observer at Labour's annual conference, as the worst he has had. [1]

In August 2016, following his demotion from the cabinet, Osborne was given permission by the Advisory Committee on Business Appointments (ACOBA) to register with the Washington Speakers Bureau and take up employment as a public speaker. Osborne sought to 'make speeches on the current political environment'. The committee approved the appointment on condition he wait three months from his last day in ministerial office before taking up his first commission, that he not draw on any privileged information available to him as minister, and he should not become personally involved in lobbying government on behalf of his employer. [4]

Osborne's profile on the company's website describes him as 'a principled' and 'modern and renowned global leader', responsible for a 'dramatic improvement' in the UK economy, and who offers audiences 'authentic and forward-thinking analysis of the world's most complex economic issues, and the way forward for Britain and the world economy'. [6]

In November 2016, the parliamentary register of interests revealed Osborne made a total of £98,446.40 for four-and-a-half hours of work in just two months. His speeches were made to the Securities Industry, Financial Markets Association and the Hoover Institution at Stanford University, California. [7] In December 2016, the register of interest revealed Osborne earned over £500,000 between October and November at events with Wall Street banks and financial firms, including a £85,396.24 engagement with Citibank, £34,109.14 with Black Rock and £68,125.35 with Centerbridge Partners. [8]

Rare ACOBA reprimand for not consulting on new think tank

In September 2016, Osborne launched a think tank called Northern Powerhouse Partnership, said to be his 'major focus' outside of his parliamentary duties. The body will aim to lobby and hold the government to account on devolution for the north, as well as influencing industrial strategy, education policy and large-scale transport projects like HS2. [9] In a Yorkshire Post article, prime minister Theresa May said the government would support the continuation of Osbrone's devolution project, and communities secretary Sajid Javid 'warmly welcomed' the launch of Northern Powerhouse Partnership. Speaking at the launch, Osborne said: 'I'm so pleased major businesses, civic leaders and others have worked with me to create this new Northern Powerhouse Partnership. I'm also glad that the government has given its support.'

Following his appointment as chair of the think tank, Osborne was reprimanded by ACOBA for not consulting the committee beforehand. It cautioned him that he should not make use of 'privileged access' gained from his time as a minister to influence government policy, and that in future the body should seek advice on all appointments before they are announced. [10]

In January 2017, Osborne was given permission to take on a role as adviser to BlackRock, the world's largest fund manager. His role will involve 'speaking at client conferences and advising on developments in the global economy'. ACOBA had no concerns about the appointment, despite the fact Osborne had been in contact with the firm while serving at the treasury. [4] His salary is undisclosed, but sources expect it would be within the hundreds of thousands. [11]

On the new role, Osborne said 'BlackRock wants better outcomes for pensioners and savers - and I want to help them deliver that'. His contract however forbids him from being involved in any work with the UK government. [2] He is expected to provide insights on European politics and Chinese economic reform.

He joins his former chief of staff Rupert Harrison, who was appointed as a senior strategist for the firm in 2015.

In January 2017, Osborne became a 'Kissinger Fellow' at the think tank established by veteran Republican [[John McCain, the McCain Institute for International Leadership, where he will be asked to 'build on his skills as a statesmen and leader'. On the appointment, McCain said:

'At a time when the great democracies of the world are facing challenges such as we have not seen for generations, we need strong, values-driven leaders like George Osborne.' [12]

Editor of the Evening Standard

In March 2017, Osborne was named the new editor of the London Evening Standard, prompting a series of calls for him to stand down as an MP and raising questions over existing parliamentary systems for preventing conflicts of interest. [13]

The role was not approved by ACOBA before its announcement, though a spokesperson stated that the body would consider his application in the coming weeks.

A Labour spokesman said the appointment was in potential breach of the ministerial code and is 'yet another example of the establishment revolving door, a closely-knit clique who are holding back the British people', making 'a mockery of the independence of the media'.

Evgeny Lebedev, the proprietor of the paper, called him someone of 'huge political achievement, and economic and cultural authority' and 'the obvious choice' for the position, while Osborne said he was 'thrilled'. He is expected to begin the new role in May 2017.

In an article in The Spectator on 28 February 2004, he confessed to being a long term fan of George Bush:

“I’m a signed-up, card-carrying Bush fan. I have been ever since I met him when he was governor of Texas. … He found an answer to this question: what is the Right for in the age of Clinton–Blair? The Conservatives would do well to listen and learn.” (see Osborne’s website here)

As befits a fan of George, he was gung ho for invading Iraq. As early as 29 April 2002, a year before the war, he lectured Defence Secretary, Geoff Hoon, in the House of Commons on the necessity for military planning for a ground invasion:

“Both the Prime Minister and the American President have made it clear that military action against Iraq is at least an option, even if no decisions have been taken. Can the Secretary of State reassure the House—or at least, the Opposition—that intensive preparations are under way for the contingency of military action, including a possible ground campaign; otherwise, the threat against Saddam Hussein is hollow?”

To be fair to him, he didn’t pretend that the invasion was about disarming Iraq of “weapons of mass destruction”: he simply wanted “regime change” in Baghdad. In a House of Commons debate on 22 October 2003, he was one of the very few backbenchers to defend the decision to invade, and to do it with vigour:

Understandably, he has not repeated this vigorous defence of the invasion since, in the House of Commons.[14]

Listen to this: “England is going back to sleep. And little wonder when we’re told every day by sages in our national media that the War on Terror is misconceived, that the terrorist threat is exaggerated, that what we’ve done in the last three years has only made matters worse, and that the Iraq war was a ghastly mistake that is best forgotten . . . There are few voices to be heard putting the other view: that the terrorists pose a fundamental threat to our way of life, that fight them we must, that Iraq was part of that fight and that we are winning.”

This is taken from an article that appeared in The Spectator only 22 months ago. Its author did not realise that within little more than a year he and his friend David Cameron would be the two most powerful figures in the Conservative Party. Or that in time they would be odds-on to form the next government.

“We did not choose the War on Terror,” George Osborne continued, beneath the headline “While England Sleeps”, “it chose us. We could try to walk away from it now. We could distance ourselves from America, say the Iraq war was a mistake . . . But it would not save us. For remember the words of the Madrid bombers before they set out to kill 200 innocents on their way to work: ‘We choose death while you choose life.’ With people like that it can only be a case of them or us.”

Eleven months after that article was written, suicide bombers struck in London. To what extent this was an al-Qaeda plot is debatable, but Osborne today is unlikely to think his view of the world unsupported by what happened then. The thought, sentiment and fervour behind his article are of a clever, thoughtful neoconservative: more Wolfowitz than Bush, more egg-head than jar-head, but neocon nonetheless.[15]

In February 2014, Osborne called on environmentalists to drop their 'ideological' opposition to shale gas and expressed strong support for fracking as a means to address climate change in 'as cheap a possible way'. [16]

In January 2015, a leaked cabinet letter showed Osborne had requested ministers intervene in local planning to fast track fracking as a 'personal priority' and deliver on the 'asks' from the shale gas industry. These included resolving the concerns of county councils over impacts to public health and local congestion, on which Osborne wrote 'I expect to see rapid progress'. The letter also indicated Osborne demanded an improvement in public relations by building a 'network of neutral academic experts available to provide credible evidence-based views' in support of fracking, and committing up to £5m of taxpayer funding to provide independent advice to the public in order to 'demonstrate the concept' of safe fracking. [17]

Osborne's constituency hosts six oil and gas licence blocks, awarded to energy companies by the Oil and Gas Authority under the 14th licensing round in 2015. One of the license blocks was given to IGas, while the other five went to INEOS. [18] Across these blocks, there are plans to conduct '2D and 3D seismic surveying', drill a total of seven new shale wells and five 'hrz frac well'. [19] No applications are currently underway.

Osborne has voted on one occasion in favour of weaker regulations on fracking, but has been absent several times on other similar votes. [20]

In my capacity as Shadow Chancellor of the Exchequer, support for my office is received from: Lord Harris of Peckham, Mr S Robertson, of London
Gifts, benefits and hospitality (UK) February 2006, I received upgrades from Virgin Airways on return flights London to Washington DC. (Registered 22 February 2006)[2]

In 2008, The Daily Telegraph reports[21] that Labour MPs John Mann and Kevan Jones had submitted a complaint about £500,000 in donations for shadow chancellor George Osborne. No further details were disclosed.

The Guardian adds that Osborne 'had failed to inform the parliamentary commissioner for standards of nearly £500,000 received last January from bankers'[22]. Again no further details were disclosed.

Osborne is reported to have thanked Daniel Finkelstein 'for providing him with the lowdown on the Jewish community'[26].