Geoff Hoon is a British Labour Party politician who served as the secretary of state for defence from 1999 until 2005. Other posts included transport secretary, leader of the House of Commons and government chief whip. 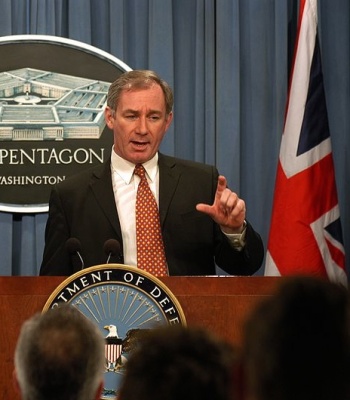 Geoff Hoon at the Pentagon, 12 February 2003. Source: US Department of Defense

He was the MP for Ashfield from 1992 until 2010, when a cash-for-access lobbying scandal forced him to resign.

Hoon has worked in the defence sector since leaving parliament, mainly with helicopter manufacturer AgustaWestland which he joined in 2011. He stepped down as its international director in October 2016. [1]

Resignation from Ministry of Transport

Hoon resigned as transport secretary in 2009 amid controversy over his MP expense claims. The Telegraph reports he had claimed expenses relating to two different properties at the same time. He apologised 'unreservedly' for the error. He 'is thought to have amassed a sizeable property portfolio worth more than £1.7 million'. [2]

Suspension from the Labour Party

In 2010 Hoon was suspended from the Labour Party after being secretly filmed by television programme Dispatches offering his consultancy services for £3000 a day. Hoon later issued an 'unreserved' apology for the filmed comments. [3] Hoon had told Dispatches that:

One of the challenges I think I am really looking forward to is sort of translating my knowledge and contacts about sort of international scene into something that bluntly makes money.

There will be opportunities for American companies, in particular, to look around at some (em) vulnerable European companies because those companies will become vulnerable as their own governments cut back on defence spending. I foresee, its one reason why I’m talking to American private equity firms, I foresee a period where we may well see American companies in effect, buying market share in Europe because they will be buying up national champions who are not getting the support they need to, to continue.

In 2014, the Strasbourg court rejected his complaint that the investigation and report had breached his human rights. It claimed the complaint about his right to a fair hearing was inadmissible, and the 'interference' with Hoon's private life had been 'proportionate'. It added that Hoon's complaint about privacy was 'manifestly ill-founded'. [4]

In May 2011 Hoon took up the role of executive senior vice-president of AgustaWestland, responsible for sales of helicopters outside the UK and Italy. [3].

This proved controversial because Hoon, while defence minister, had landed several contracts with the company. One was worth up to £1bn for 'FutureLynx' helicopters in 2005, awarded just two months after AgustaWestland had announced it would cut its 4000 West Country workforce by some 680. [6]

AgustaWestland also has been involved in several scandals, facing repeated accusations of bribery and falsifying invoices in helicopter sales to India, Algeria, Sweden and South Korea. The company was charged with bribery, along with two of its top officials, by the Italian court. [7]

As International Director Hoon was the face of AgustaWestland at international trade shows, speaking for the quality and performance of the helicopters while defending its ways to secure contracts. In an article for Defense World, Vishwanath Patil suggests that, while Hoon might not have been directly involved in the unethical procedures of securing Agusta Westland contracts, 'his spirited defence of a company against which the Italian court has established charges of bribery [...] shows a surprisingly high level of conviction'. DefenseWorld noted that the UK government had not investigated either Agusta Westland or the individuals involved in the scandal, which it speculated indicated the level of influence Hoon could still be holding on the UK government. [8]

From 1 January 2016, the activities of AgustaWestland were merged into Leonardo-Finmeccanica's Helicopter Sector, of which Hoon became Managing International Director until he stepped down in late 2016.

In November 2003 Hoon gave a speech to the United Jewish Israel Appeal, in which he declared that he is a 'strong supporter' of Labour Friends of Israel and a good friend of Trevor Chinn[9].

Hoon has been interviewed several times by the American think tank Center for a New American Security on Global Defence Markets and other related topics. [10] [11]