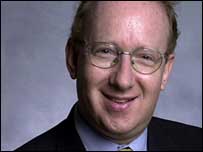 Daniel William Finkelstein, Baron Finkelstein OBE, (born 30 August 1962) is the associate editor and former executive editor of the The Times[1] He is a former member of the Social Democratic Party but has long been associated with the Conservatives. He is reported to be one of UK chancellor George Osborne’s 'closest confidants'.[2] Osborne is part of the collection of right-wing ideologues now at the top of the Conservative Party, and sometimes described as the Notting Hill set.[3] [4]

Finkelstein was chairman of the Policy Exchange think tank from 2011 until September 2014, as has been an adviser/contributing editor to the PR firm Editorial Intelligence.[5]

He was appointed as a member of the House of Lords in August 2013.

Finkelstein grew up in Hendon in North London. Both his parents are Jewish immigrants. He describes his family background as “a traditional Jewish Social Democratic household”[6] He attended Hendon Prep School and University College School (part of the elite Eton Group) before taking a degree in economics at LSE. He graduated in 1984 and was awarded a Masters from City University in 1986.

Finkelstein went on to become director of the Social Market Foundation which was, as The Observer put it, “founded in 1988 out of the ashes of the Social Democratic Party”.[7] Finkelstein headed the think-tank from 1992-95 and campaigned for a gradual corporate takeover of public services:

Daniel Finkelstein, director of the Social Market Foundation, argues: "It is no good people pretending there are easy intellectual solutions. If there were, there would be no problem implementing them. If we want to reform the state we have to have an intelligent strategy which must have a beginning as well as an end, including private provision within the NHS and incremental reform of the welfare state." Mr Lilley's agenda, like Mr Finkelstein's, is more gradualist, concentrating on a change in the terms under which the British people relate to the welfare state. That can be done by the increased use of vouchers in education, for example, more contracting out of services in the NHS and a go-ahead for private companies to provide state-funded schools. Only after piecemeal privatisation and gradual charging, can the assault begin.[8]

Finkelstein left the Social Market Foundation to work as an advisor to the Major government. In 1995 The Financial Times wrote: “A new face whose influence will grow rapidly is Mr Daniel Finkelstein, 33, the party's new director of research. Poached from his job as head of the Social Market Foundation, an independent think-tank, his main task is to plan attacks on Labour.”[9] One of his roles was participating in the committee set up to win back the advantage in spin then ceded to New labour. Finkelstein is candid that he is no critic of New Labour spin, having practised the same himself:

For the last 18 months of the Major Government I attended a Cabinet committee known as EDCP. Its job was to organise the presentation of government policy. The timing of announcements was changed and the tendency of the Civil Service to issue repeated press releases containing the same piece of bad news was curbed. This sort of management work is sensible and there is nothing sinister about it. There is nothing sinister about briefing the press either. When Peter Lilley, as Social Security Secretary, announced his plans for pension reform in 1997 I spent a day explaining his proposals to journalists. Naturally I used the opportunity to promote the benefits of the reform and dismiss arguments against it. Without such spinning many journalists would have found the arguments hard to digest. One of the reasons why this Government's media management has been strongly criticised is that it is good at it. Tony Blair's decision to appoint Alastair Campbell, making his official spokesman a political appointment, was ruthless but right. Both John Major and William Hague opposed the change and pledged that the Conservative Party would appoint a career civil servant. Implementing this policy would be ill-advised.[10]

Terrorism and the Middle East

Finkelstein has enthusiastically supported America and Britain’s military aggression in the Middle East. He stated: “There will be peace in the Middle East only if, first, there is victory in the war against terrorism.”[11]

In Finkelstein’s writing Israel is portrayed as a beacon of democracy and civilisation, rather than an occupying power and a repeated violator of international law. Opponents of American policy meanwhile are simply terrorists motivated by a hatred of western style freedom and democracy:

It is Israel that for many years now has been fighting America's war, the democratic world's war. For many years Israel has faced almost daily attack from the same sort of people who attacked the World Trade Centre, indeed perhaps from the hijackers themselves. What these extremists hate about Israel is not its appropriation of a tiny sliver of Arab land, it is the sitting of a Western style, non-Islamic democracy in the Middle East.[12]

In another piece echoing the propaganda line from Washington and London, Finkelstein argued following the 7 July bombings in London that such acts of violence should not be subjected to any scrutiny or analysis in order to 'understand' them:

So many seem incapable of accepting that these things happen just because criminals do criminal things. It is no more interesting to understand their reasoning than to find out what the Yorkshire Ripper thinks about prostitutes. And the more we search for reasons, the more we have aided the terrorists…It is always difficult to counsel that we should understand less, be less curious. Yet in the War on Terror, to understand less is to comprehend more.”[13]

In the same article Finkelstein criticised the BBC for its editorial policy regarding the use of the term ‘terrorist’. Section 11 of the BBC's editorial guidelines which reads: "The word 'terrorist' itself can be a barrier rather than an aid to understanding. We should try to avoid the term."[14]

“Some of my friends think I’ve gone slightly out of my mind about Iraq.” - Daniel Finkelstein, October 2001[15]

Following September 11th Finkelstein quickly responded by advocating of an invasion of Iraq. He even pushed the theory that there was a link between Saddam Hussein and the World Trade Centre attacks. This theory had first been made popular by Laurie Mylroie who attempted to established Iraq's involvement in the 1993 WTC bombing. When propaganda linking Iraq to the bombing of the twin towers was required in selling the war, Finkelstein bought the Laurie Mylroie thesis up-to-date. On 2 October 2001 he wrote an article titled, “The twin towers trail leads to Saddam”:

while we may be confident that Osama bin Laden was involved in the latest World Trade Centre attack, we cannot be remotely confident that he and his network acted alone. An attack of this complexity would have required active state sponsorship. This leads to the second point — the most dangerous state sponsor of terror is Saddam Hussein. The Secretary of State, Colin Powell, is right to contemplate a new war against him.[16]

From the moment that the first of the 1993 bombers, a Palestinian with links to the PLO, was arrested, idiotically attempting to reclaim the deposit on the rented van he had blown up, the FBI seemed convinced that this was merely a criminal matter. Since then the extraordinary investigative efforts of Laurie Mylroie, an American academic, have strongly suggested otherwise.

Mylroie was an apologist for Saddam's regime who reversed her position upon his invasion of Kuwait in 1990. In Study of Revenge she acknowledges Richard Perle and John Bolton and the staff of the American Enterprise Institute for their assistance. Lewis 'Scooter' Libby, (later Vice President Cheney's chief of staff for a time), gave "generous and timely assistance." And Paul Wolfowitz "was instrumental in the genesis of Study of Revenge", his then-wife is credited with having "fundamentally shaped the book," while of Wolfowitz, she says: "At critical times, he provided crucial support for a project that is inherently difficult"[17].

Having blurbed Mylroie’s first book as "wholly convincing," Richard Perle now says that "not everything she says is convincing" and that Mylroie's thinking was "not very important" to the development of his own views on Iraq. At the same time, Perle continues to praise Mylroie's investigative skills, even saying she should be put in charge of "quality control" at the CIA.[18].

In 2008, The Jewish Chronicle declared "the top spots" on their second annual list of those who "wield the greatest influence on British Jewry". Finkelstein is listed at number 11. People who qualify for being listed are described as "those with a vision for Jewish life in this country and who did their utmost to bring it about using either money; persuasion; religion; culture; political or social leadership; or simply inspiring through word and deed". In order for someone to be listed in the top 20, it is generally necessary to demonstrate influence in more than one of the spheres.[19].

In the report Finkelstein is described as:

using his high media profile to speak out on issues of concern to the community. In Jewish terms, our panel rated him the cream of the crop of the senior journalists of his generation: he won the new Bermant Prize. Came up through the Tory ranks, serving in top Central Office capacities including policy-unit head to William Hague when he was party leader. However, his ambitions of a seat at Westminster were scuppered when he failed to win Harrow West from Labour in 2001. He has maintained connections, being thanked by Shadow Chancellor George Osborne for providing him with the lowdown on the Jewish community.[20]