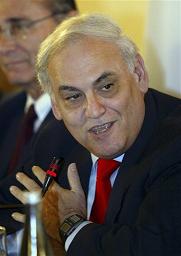 Richard Perle is a former neoconservative Pentagon policy advisor who was chairman of the Defense Policy Board for 17 years[1]. Perle served as assistant secretary for defence under Ronald Reagan, during this time he was known as "The Prince of Darkness", for his hardline views[2]. Seymour Hersh described Perle as "one of the most outspoken and influential supporters of the war in Iraq"[3]. Perle has also attended events hosted by the Bilderberg Group[4].

As a graduate student in the summer of 1969, Perle worked for the Committee to Maintain a Prudent Defense Policy, helping to draft papers for Senator Henry Jackson, in a campaign which won a key Senate vote in in support of an Anti-Ballistic Missile (ABM) system.[5] At the end of the summer, Perle chose to stay on as one of Jackson's Senate staffers. Henry Kissinger would later say of him, that he "proved as steadfast as he was ingenious in pursuing his larger aim: to stymie the administration's arms control policies."[5]

Perle devised an October 1972 initiative in which Jackson sought to link detente-inspired trade concessions to the Soviet Union with emigration rights for Soviet Jews.[6]

Following the formation of the Coalition for Peace Through Strength in 1978, bringing together New Right and neoconservative critics of the Carter administration, was amongst those who spoke under its s auspices.[7]

According to the New York Times Shlomo Zabludowicz and his son, Chaim Zabludowicz, became clients of Perle in 1980.

They paid $90,000 to the Abington Corporation, a consulting company where Mr. Perle worked that was owned by John F. Lehman Jr., later the Secretary of the Navy.
It was not until January 1982, nine months after Mr. Perle says the Zabludowiczes stopped being his clients, that he settled his financial arrangements with Mr. Lehman and Abington and received a portion of the $90,000 fee from 1980. The $50,000 Mr. Perle received in March 1981 was in addition to his share of the Abington fee.[8]

Perle was one of a number of members of the Committee on the Present Danger (CPD) who had joined the Reagan presidential campaign by October 1979.[9]

Along with Fred Iklé and John Lehman, Jr., Perle was one of a number of CPD veterans appointed to Reagan's Department of Defence, becoming Assistant Secretary of Defence for International Security Affairs.[10]

When 33 neoconservatives endorsed Bill Clinton for President in August 1992, Perle was not among the signatories, although Joshua Muravchik claimed to be reaching out to him through the Democratic chair of one of the Congressional intelligence committees, Rep. David McCurdy, a former contra backer.[11] In December 1992, Perle told the McNeil/Lehrer Newshour that the "President-elect was elected with broad support from Carter Democrats but also from Reagan Democrats, and the team, as we see it, seems heavily weighted toward the Carter Democrats." He nevertheless praised the appointments of Defense Secretary Les Aspin and CIA Director James Woolsey.[12]

Aspin would later consult Perle about he was viewed among Pentagon officials.[13] Perle in turn defended Aspin in a Washington Post editorial.[14]

In February 1994, Perle attacked Clinton's decision to issue a visa to Gerry Adams as the most serious threat to the special relationship with Britain since the Suez Crisis.[15]

On CNN's Crossfire in August 1992, Perle said he favoured a no-fly zone in Bosnia.[16] In December 1992, he told CNN, the arms embargo was making the situation worse.[17]

Perle was one of 100 conservative figures led by Margaret Thatcher and George Shultz who signed an open letter to President Bill Clinton on 1 September 1993, calling for air strike and military aid to the Bosnians.[18]

In February 1994, Perle spoke at the Munich Security Conference, in the wake of a Serbian attack on Sarajevo market. Speaking immediately after Defence Secretary William Perry, Perle repeated his call for air strikes and the lifting of the arms embargo on the Bosnian Muslims.[19]

We should move immediately to revise the U.N. embargo that has kept the Bosnian Muslims outgunned and under siege. With Bosnia excluded from the embargo, the U.S. and others should supply essential arms to the Bosnian Government. Then Bosnian troops would have a decent chance of achieving defensible borders.
Second, we should plan to use NATO air power not only against tactical targets in Bosnia, like the artillery positions surrounding Sarajevo, but also against strategic targets in Serbia itself. Precise attacks by advanced weapons could cripple air bases and military logistics centers, or Belgrade's power supply, while posing little threat to civilians.[20]

In December 1994, Perle joined a call by the Action Council for Peace in the Balkans for the United States to lead and organize action to disrupt the Serbian attack on Bihac in northwestern Bosnia by the use, if necessary, of U.S. air power.[21]

In a July 1995 Washington Post op ed, Perle supported a legislative proposal by Robert Dole, and Joe Lieberman to require President Clinton to end U.S. participation in the U.N. embargo barring the supply of arms to the government of Bosnia.[22]

Later that month he reportedly warned that the US had an important geopolitical interest in protecting Muslims from attack:

Of all the ways that this post-Cold War world could turn very sour, and one of the most worrisome is if you get a kind of holy feud between the world of Islam and the non-Islamic world.
And at the moment, Muslims look at what's going on and believe that they're being victimized because they're Muslims, he said. I think that's very dangerous.[23]

Most of all, the administration needs to clarify the potentially contradictory relationship between peacekeepers and the more effective underpinnings of a stable agreement: the ability of the Bosnians to defend themselves, backed up perhaps with the threat of NATO air power. After more than 2 1/2 years of claiming to deplore the embargo against Bosnia -- while enforcing it all the same -- vague hints that it will be lifted with a peace agreement are neither adequate nor convincing.[24]

Perle was encouraged by chief US negotiator Richard Holbrooke to act as an unofficial advisor to the Bosnian delegation at the Dayton talks in November 1995.[25] Perle, who reportedly offered his services free, had known Bosnian Foreign Minister Muhamed Sacirbey for several years.[26]

The following month Perle testified to Congress that the administration had given a verbal commitment to train and arm the Bosnians:

You won't find these assurances in the Dayton accord. Despite Bosnian pleas to do so, the administration refused to put in writing its sotto voce promise to supply Bosnia with the arms and training that will determine whether the Dayton accord is a path to peace and reconstruction or a year-long interval before the final destruction of Bosnia.[27]

Perle told the House International Relations Committee, "the administration is blundering toward an ill-defined, unworkable scheme to hand off responsibility for arming and training the Bosnians by subcontracting this vital program to other countries. Since our militarily advanced allies, Britain, France, Germany, and most other NATO countries, are actually opposed to arming and training the Bosnians, we will likely end up with an unseemly, protracted and uncertain scavenger hunt for trainers and weapons, and the Bosnians will be forced to settle for inferior equipment and inadequate training."[28]

Richard Perle was closely linked to Ahmad Chalabi who was the source of much of the questionable intelligence on Iraq which was passed to Washington before the war[29].

"The media response, has been both prompt and enthusiastic, editors of The Financial Times, The Daily Telegraph, The London Times, The Economist, The Sun and The Spectator have all participated in our discussions"[31].

For these lobbying efforts, at the end of 2007, the US Department of Defence paid the Policy Forum around $80,000 which was paid to Devon Cross[32].

While Devon Cross was successfully selling the war in Iraq to The Telegraph in the U.K., Richard Perle was on the board of Hollinger International who owned the newspaper. At this time The Telegraph also accused prominent anti-war MP George Galloway of being in the pay of Saddam Hussein, profiting from the oil-for-food programme and using the Mariam Appeal for personal enrichment. Galloway successfully sued the paper for defamation and received £150,000 in damages. [33] Richard Perle was also serving as an advisor to the Foundation for Defense of Democracies at this time, it was (FDD) journalist Claudia Rosett who originally broke the oil-for-food scandal[34].

Richard Perle was a director of Hollinger International where he was criticised by a report by the former chairman of the Securities and Exchange Commission. The report claimed that Richard Perle served as the enabler for Conrad Black to "improperly take hundreds of millions of dollars", Perle was singled out in the report for having conflicts of interest [35]. Richard Perle denies these allegations and asserts that he was misled by Conrad Black[36].

Perle was named in an internal investigation into Hollinger International, Perle was investigated for receiving $3m in bonuses from Hollinger some of which went to Perle's own company Trireme. Boeing invested £20m in Trireme shortly before Perle advocated a Pentagon scheme for leasing Boeing tankers to support the Iraq war, Perle denied any conflict of interest[37].