The Sun is a UK-based tabloid newspaper published by News International. Dominic Mohan was appointed editor of the paper in August 2009.[1]

The Sun, like its former Sunday counterpart The News of The World, is owned by Rupert Murdoch’s organisation News International.

Rupert Murdoch moved production of the newspaper away from its traditional home in Fleet Street to new premises in Wapping East London in 1986. The move was designed to modernise production practices, reduce costs and perhaps more importantly remove the influence of the powerful Fleet Street print unions. According to journalist Nick Davies the move to Wapping "Released a chain reaction of internal changes which have had a devastating effect on truth-telling journalism". [2]

The Sun printed a story in 1988 when the Birmingham Six lost an appeal hearing:

The Sun saw the judgement as an opportunity to declare open season on those who had campaigned for the case to be re-opened. The Sun's front page headline the next day read, LOONY MP BACKS BOMB GANG. An editorial said, 'If the Sun had its way, we would have been tempted to string 'em up years ago.'[3]

The Birmingham Six were released 3 years later in what was described as "one of Britain's gravest miscarriages of justice".[4]

In April 1989 The Sun under the headline “The Truth”, reported that during the Hillsborough stadium football disaster Liverpool football fans had attacked policemen while they tried to help injured victims of the crush. The sub-headlines on the piece read: "Some fans picked pockets of victims"; "Some fans urinated on the brave cops"; "Some fans beat up PC giving kiss of life".

Kelvin MacKenzie who was the editor at the time apologised publicly when the Press Complaints Commission condemned his paper's descriptions of Liverpool fans urinating on the Hillsborough dead and stealing from their bodies. He later undermined the sincerity of his apology at a business lunch in Newcastle, where he said "I was not sorry then and I'm not sorry now", he went on to say "All I did wrong there was tell the truth". The Sun printed a full-page apology in July 2004 for what it called "the most terrible mistake" in its history.[5]

In August 2003 The Sun printed a full week of coverage dedicated to criticising asylum-seekers. David Blunkett wrote an article for the paper supporting The Sun's stance. He said, "I am not in dispute with the Sun on this week’s coverage". According to journalist Peter Oborne, the campaign was the result of a coordinated effort between The Sun and the Government. Oborne explains, "Sun readers never knew that Blunkett had quietly agreed to meet the paper and knew about the campaign before it had even started."[6]. 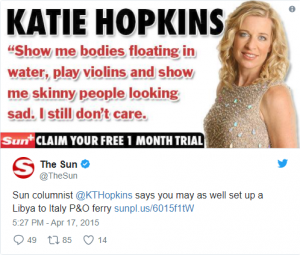 "No, I don’t care. Show me pictures of coffins, show me bodies floating in water, play violins and show me skinny people looking sad. I still don’t care."

The UN high commissioner for human rights, Zeid Ra’ad Al Hussein, strongly condemned Hopkin's language likening it to that used by Rwanda’s Kangura newspaper and Radio Mille Collines during the run-up to the 1994 Rwandan genocide.

MPs protested against Murdoch's acquisition of The Times and The Sunday Times because of the effect a media monopoly could have on democracy in the United Kingdom. This was because Murdoch already owned The Sun and The News of The World. A report by the Labour Government in 2001 said, "A healthy democracy depends on a culture of dissent and argument, which would inevitably be diminished if there were only a limited number of providers of news"[7].

The main concern with Rupert Murdoch's media monopoly is that he could use it to manipulate public opinion and therefore put pressure on politicians who oppose his business interests. In October 2003 in the United States a study by the nonpartisan Program on International Policy Attitudes showed that 60% of U.S. citizens believed either that: clear evidence had been found of links between Iraq and Al Qaeda; W.M.D. had been found in Iraq; world public opinion favored the U.S. going to war with Iraq. 80% of the people who believed these falsehoods received their news primarily from Rupert Murdoch's Fox News.

The Sun has an average daily net circulation of 2,899,310, according to the latest figures from ABC. These figures cover the period from the end of November 2008 to the end of December 2008.[11]