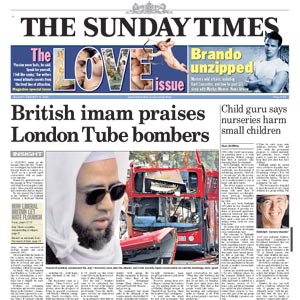 The Sunday Times is a UK-based national newspaper published by News International. The Newspaper has a cover price of £2, the first UK newspaper to be priced so highly.[1] The current editor is John Witherow, and it is the sister paper of the daily edition The Times.

Investigative Journalism at The Sunday Times

In 1967 editor of The Sunday Times, Harold Evans put together an investigative journalism team to be known as the Insight Team. They were specifically tasked with “long-term complex investigations”. Originally set up to investigate the story of Kim Philby the M16-KGB double agent who defected to Moscow [4]. The Insight team were responsible for a series of important investigations including:

The Rupert Murdoch take over of The Sunday Times and the abrasive manner of editor Andrew Neil led to an exodus of experienced reporters at the paper. The priorities of the newspaper were also very different, “the imperatives of a journalistic scoop had been allowed to take precedence over the need for proper tests to establish historical truth"[7]. These elements led to a series of flawed investigations at the paper that saw the Insight team mockingly referred to as the Hindsight team. Some of these investigations printed were:

At the time of the take over Rupert Murdoch was threatened by MPs who wanted to refer the sale to the Monopolies and Mergers Commission. Murdoch claimed he would not go through with the sale if this was to happen [11]. Murdoch managed to avoid the sale being referred to the commission by agreeing to increased powers for the Independent National Directors of the newspaper. The role of these directors would be to adjudicate in disputes between the editor and the company, make decisions on the appointment and dismissal of editorial staff and to be involved in decisions about the sale or transfer of the newspapers. The Independent National Directors were also given veto powers [12]

Harold Evans, who was the editor of The Sunday Times when Murodoch bought it and later the editor of The Times argued that the concessions made by Murdoch were worthless. Evans had fought for the increased powers of the Independent National Directors but in practice, he found they provided him with no effective protection. In his autobiography he wrote that none of the guarantees that Rupert Murdoch gave to safeguard editorial independence "are worth the paper they are written on—unless the proprietor shares the spirit of them. If he does, they are merely ornamental; if he does not, they are unworkable. Internal freedom cannot be acquired by external rules" [13]. Andrew Neil who was the editor of The Times from 1983 to 1994 agreed "It was a conceit invented ... to allow Mr Murdoch to take over these papers in the first place, and it was put in place for that reason. It was not really put in place to protect the independence of the editors". [14].

In 2006 both the Times and Sunday Times reported extensively on the report The Political Economy of Devolution written by David Bell and Donald Mackay and published by the Scottish Think Tank, the Policy Institute. It was of little surprise the Sunday Times commented on this report so extensively given it was the Sunday Times who commissioned it [18].

This example illustrates the interlocks between academia, Think Tanks and the media and how they can, and do, corroborate and reinforce each others views in water policy debates in Scotland.

MP's protesting against Murdoch's acquisition of The Times were concerned with the effect a media monopoly could have on democracy in the United Kingdom. This is according to a report by the Labour Government in 2001 because "A healthy democracy depends on a culture of dissent and argument, which would inevitably be diminished if there were only a limited number of providers of news" [19].

The main concern with Rupert Murdoch's media monopoly is that he can use it to manipulate public opinion and therefore put pressure on politicians who oppose his business interests. In October 2003 in the United States a study by the nonpartisan Program on International Policy Attitudes showed that 60% of U.S. citizens believed either that, clear evidence had been found of links between Iraq and Al Qaeda; W.M.D. had been found in Iraq; world public opinion favored the U.S. going to war with Iraq. 80% of the people who believed these falsehoods received their news primarily from Rupert Murdoch's Fox News. The clear bias of Fox News has not been displayed in The Times but Krugman argues that "a number of former Times employees have said that there was pressure to slant coverage — and everyone I’ve seen quoted defending Mr. Murdoch’s management is still on his payroll" [20].

The Sunday Times has an average daily net circulation of 1,155,589 according to the latest figures from ABC, these figures cover the period from the end of November 2008 to the end of December 2008. [22]