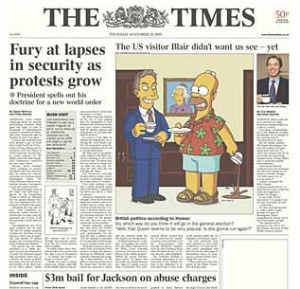 The Times is a UK based national newspaper published by News International. The Newspaper has a cover price of 90 pence since an increase in January 2009, and has traditionally been classified as a broadsheet. To boost sales after a successful trial the paper moved to tabloid format in 2004 [1]. The current editor is James Harding and it has a sister paper published on Sundays The Sunday Times. 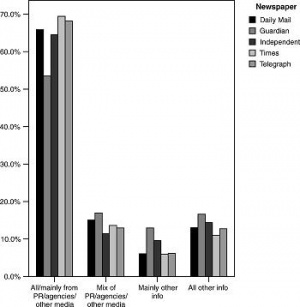 According to research conducted by Professor Justin Lewis at Cardiff University up to 70% of news stories published by the times are wholly derived from PR activity, News Agencies or replacated from other media sources. Lewis' research found that that "The Times and the Daily Telegraph appear to replicate a significantly higher percentage of agency/PR material than the Guardian, which, according to these data, is the most independent of the newspapers. While just over half the stories in the Guardian come wholly or mainly from pre-packaged sources, this compares with around two-thirds of the stories on other newspapers. By the same measure, the Guardian is also more likely to use a mix of information or to get information from other sources". Lewis' study concludes, "What is clear from this study is that the quality and independence of the British news media has been significantly affected by its increasing reliance on public relations and news agency material; and for the worse!" [4].

At the time of the take over Rupert Murdoch was threatened by MP's who wanted to refer the sale to the Monopolies and Mergers Commision. Murdoch claimed he would not go through with the sale if this was to happen [5]. Murdoch managed to avoid the sale being referred to the commision by agreeing to increased powers for the Independent National Directors of the newspaper. The role of these directors would be to adjudicate in disputes between the editor and the company, make decisions on the appointment and dismissal of editorial staff and to be involved in decisions about the sale or transfer of the newspapers. The Independent National Directors were also given veto powers [6]

Harold Evans, who was the editor of The Sunday Times when Murodoch bought it and later the editor of The Times argued that the concessions made by Murdoch were worthless. Evans had fought for the increased powers of the Independent National Directors but in practice, he found they provided him with no effective protection. In his autobiography he wrote that none of the guarantees that Rupert Murdoch gave to safeguard editorial independence "are worth the paper they are written on—unless the proprietor shares the spirit of them. If he does, they are merely ornamental; if he does not, they are unworkable. Internal freedom cannot be acquired by external rules" [7]. Andrew Neil who was the editor of The Times from 1983 to 1994 agreed "It was a conceit invented ... to allow Mr Murdoch to take over these papers in the first place, and it was put in place for that reason. It was not really put in place to protect the independence of the editors". [8].

MP's protesting against Murdoch's acquisition of The Times were concerned with the effect a media monopoly could have on democracy in the United Kingdom. This is according to a report by the Labour Government in 2001 because "A healthy democracy depends on a culture of dissent and argument, which would inevitably be diminished if there were only a limited number of providers of news" [9].

The main concern with Rupert Murdoch's media monopoly is that he can use it to manipulate public opinion and therefore put pressure on politicians who oppose his business interests. In October 2003 in the United States a study by the nonpartisan Program on International Policy Attitudes showed that 60% of U.S. citizens believed either that, clear evidence had been found of links between Iraq and Al Qaeda; W.M.D. had been found in Iraq; world public opinion favored the U.S. going to war with Iraq. 80% of the people who believed these falsehoods received their news primarily from Rupert Murdoch's Fox News. The clear bias of Fox News has not been displayed in The Times but Krugman argues that "a number of former Times employees have said that there was pressure to slant coverage — and everyone I’ve seen quoted defending Mr. Murdoch’s management is still on his payroll" [10].

The Times has an average daily net circulation of 600,962 according to the latest figures from ABC, these figures cover the period from the end of November 2008 to the end of December 2008. [14]