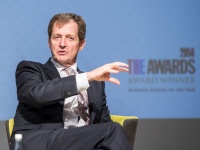 Alastair Campbell is a former government spin doctor who these days describes himself as a 'writer, communicator and strategist'.

He is best known for his role as press secretary and director of communications to former UK Labour prime minister Tony Blair between 1997 and 2003. [1][2]

He now sits on the advisory board of lobbying and public relations firm Portland PR, which was set up by another former Blair adviser Tim Allan in 2001.

He continues to advise the Labour Party, and other left of centre parties, most recently acting as strategic director for the Albanian Socialist Party, which 'won a landslide victory' in June 2013.

Campbell was surrounded by controversy during his time as adviser to Blair. Namely, his influence over the Government's decision to enter into the Iraq War. Campbell was involved in the preparation and release of the "September Dossier" in September 2002 and the "Iraq Dossier" (or "Dodgy Dossier") in February 2003. Both documents argued the case for concern over possible weapons of mass destruction in Iraq but were later heavily criticised for overstating and distorting the actual intelligence findings. [4]