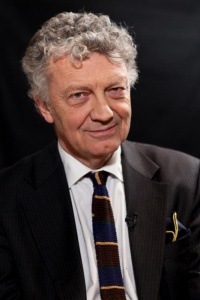 William Shawcross is a for British journalist and was chairman of the Charity Commission from October 2012 until February 2018.

Shawcross was born in Britain in 1946.[1] Shawcross attended Eton, where he was in the same year as Defence Minister Lord Astor of Hever.[2]

He was named by the Cabinet Office as the proposed chair of the Charity Commission in August 2012.[3]

At a hearing of the House of Commons Public Administration Select Committee to examine his appointment, the chair Bernard Jenkin noted:

Robert Halfon stated: "I should declare that I was a founding patron of the Henry Jackson Society when it was first set up and I am fairly involved with the organisation."[4]

A third committee member, Paul Flynn added: I think perhaps I had better say that the Henry Jackson Society organised a meeting at which I was a prime speaker, to my astonishment.[4]

Obviously I would wish to resign all my memberships of the Henry Jackson Society and other charities with which I am involved. I think the Henry Jackson Society is a great society and I am very pleased that they had you come to speak, Mr Flynn. Henry Jackson himself was a great American senator who stood not just for right‑wing views but for freedom and liberty everywhere. That is what the society stands for now. I would do everything necessary and speak to the chief executive of the Charity Commission to make sure I was seen to be always acting in an independent manner.[4]

In an October 2012 article on Labour 'fifth columnists' in the charitable sector, Fraser Nelson, wrote:

Cameron is, now, taking this more seriously. He has been trying to build his own alliance of reformers and called a group of them to sit round his Cabinet table last year, but little came of it. He has also appointed a No 10 official to handle public appointments, and the selection of the writer William Shawcross to run the Charities Commission is a declaration of intent. But Labour spent more than a decade placing its supporters in quangos and tweaking charity laws, while Tories tend not to think of politics in this way.[5]

Nelson's comment was put to Shawcross in an interview with Third Sector magazine:

Shawcross elects not to get drawn in. "Fraser Nelson’s a very good journalist. It was a very interesting article. What else can I say?" Does he agree with its analysis about charities’ anti-government stance? "I don’t know yet. But I think there is a very interesting discussion to be had about the way charities relate to government, and are increasingly dependent on governments of left, right and centre.[6]

In August 2013, Shawcross was contacted by the Telegraph as part of their campaign, in conjunction with Conservative MP Priti Patel, on pay levels among charity executives. He stated: 'It is not for the commission to tell charities how much they should pay their executives. That is a matter for their trustees. However, in these difficult times, when many charities are experiencing shortfalls, trustees should consider whether very high salaries are really appropriate, and fair to both the donors and the taxpayers who fund charities. Disproportionate salaries risk bringing organisations and the wider charitable world into disrepute.'[7]

In October 2013, Shawcross stated: 'I think the government, in its response to the outcry from the charitable sector about the lobbying bill, has made significant changes which most of the sector, many charities, are happy with.'[8] Following this comment, Sir Stuart Etherington, chief executive of the National Council for Voluntary Organisations, wrote to Shawcross, stating that the NCVO had serious concerns that 'are shared by our members and many other organisations in the sector.'[9]

In January 2014, a House of Lords amendment exempting charities from the bill was dropped after the Charity Commission sent an email to peers suggesting sham charities might use the exemption as a loophole. This intervention was criticised by a number of organisations representing the charitable sector.[10]

Meeting with US Defence Secretary

Shawcross was one of a number of people invited to meet US Defence Secretary Donald Rumsfeld during a stopover at Heathrow on 13 September 2005.[11]