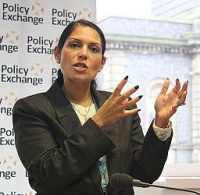 Priti Patel is a a former lobbyist and the UK Conservative Party MP for the newly created constituency of Witham in Essex since 2010.[1]

She was appointed British home secretary in July 2016 by Boris Johnson after he replaced Theresa May as party leader and prime minister.

Patel was previously secretary of state at the Department for International Development from 14 July 2016, appointed in PM May's cabinet reshuffle, [2] but was sacked by May in November 2017 for holding private meetings in Israel without informing UK government officials.

Patel was appointed exchequer secretary to the Treasury in July 2014[3] and employment minister in May 2015.[4]

A former lobbyist, she worked at PR firm Weber Shandwick from 2000 to 2003. Patel rejoined Weber Shandwick in December 2007 from drinks company Diageo (where she had shaped a global strategy on responsible drinking).

Patel worked at Weber Shandwick Public Affairs from 2000 to 2003. Weber Shandwick’s website says that she was a policy, media and campaigns adviser to the Meat & Livestock Commission, IKEA and the Bar Council. She also worked for another of its clients, British American Tobacco.[6]

Lobbying and PR for the Tobacco Industry

Four documents suggest that Patel may have been seconded to BAT's press office.

Backing the Industry in Parliament

As a parliamentarian, Patel has been supportive of tobacco industry positions on two occasions:

Priti Patel worked within Diageo's corporate relations team between 2003-2007, PR Week reported that "shaped a global strategy on responsible drinking" [27] On her re-appointment to lobbyists Weber Shandwick Public Affairs in 2007 Patel was reported as having been in the 'Corporate Relations team' at Diageo Plc, where she 'worked on international public policy issues related to the wider impact of alcohol in society'.[6] One Diageo document from November 2004 states that Patel's role was as an 'Alcohol Education Manager' within the corporate relations team. [28]

Later, however, her status at Diageo seems to have increased. The Eastern Daily Press, local news outlet in Witham, the constituency where Patel is now the Conservative Party MP, described her role with Diageo as Corporate Relations Director [29] As did the Financial Mail Women's Forum (FMWF), [30] so too did the website 'Redhotcurry', that "brings you UK-centric Asian news". [31] Patel's profile on the Redhotcurry site gives more information about her time with the drinks giant:

In 2003 she became corporate relations director at Diageo Plc where she works on international public policy issues related to the wider impact of alcohol in society. In this role Priti works with the World Health Organisation, the Eurpoean Commission and governments across Europe, US, Asia and Africa on all aspects of alcohol and health, tax and international trade issues [32]

In April 2009, Weber Shandwick UK was hired by International Financial Services London, now known as TheCityUK to promote the interests of the financial services sector in the City of London, for example on "key issues such as keeping markets open in the [then] current global crisis".[33] IFSL's press release announced that the account would be supported by Priti Patel, then "Director, Weber Shandwick Public Affairs" who will "provide additional counsel". Patel is now a Conservative MP. The then CEO of IFSL said: "Bringing the team at Weber Shandwick on board will help us establish IFSL's voice in the public debate on how financial services companies can best navigate the currently troubled economic waters." (Note the link to the IFSL press release is broken; Weber Shandwick's press release was changed in the run up to the 2010 general election, with Priti Patel's name removed. Patel's election campaign focused on her support for small business. According to her campaign website: “Her career outside of politics means she has an innate understanding about the issues faced by small businesses”).

Patel was a member of the Public Administration Select Committee which appointed William Shawcross as chair of the Charity Commission. She later worked with the Telegraph to compile figures for an investigation of executive figures paid by charities. Sir Stephen Bubb, chief executive of ACEVO suggested that there were political motives behind the campaign and Patel was one of many MPs 'on the right' who 'particularly dislike international charities who have been so effective in raising the concerns of the world’s poor'.[34]

Patel was part of a 10-person parliamentary delegation to the United Arab Emirates (UAE) in April 2012.

The trip lasted five days and gave British parliamentarians the opportunity to meet with senior government officials and private companies in both Dubai and Abu Dhabi. The UAE government paid £3,500 toward Patel's travel and accommodation. [35]