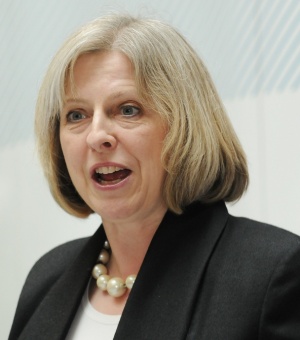 Theresa May MP is the former Prime Minister of the United Kingdom and leader of the Conservative Party, having succeeded David Cameron following his resignation in 2016. May had previously served as Secretary of State for the Home Department and Minister for Women and Equality for six years. [1]

She stepped down as PM in July 2019 under pressure from her party over the handling of Brexit.

Details of the attendees and seating plans of the Conservative's 2013 summer ball, an event where tickets cost up to £12,000 each and allows attendees to sit at the table with ministers, were leaked by the Guardian. It revealed that May sat with Lord de la Warr, director of Cluff Natural Resources, who are exploring coal gasification in Warwickshire and Wafic Said, a Syrian-Saudi businessman who helped broker the al-Yamamah arms deal.[4]

On the 9 February 2015, May attended the Conservative Party's 'Black and White ball' election fundraiser at the Grosvenor Hotel in London. The event was attended by almost the entire Cabinet, Boris Johnson and George Osborne did not attend due to the G20 event, and by party donors including; hedge fund boss Stanley Fink (Lord Fink), who wants Britain to rival offshore tax havens with an equally generous tax regime; founder of Lycamobile, who paid no corporation tax between 2007 and 2014 despite generating millions in revenue, Subaskaran Allirajah; jewellery tycoon Ranbir Singh Suri and lap dancing club owner Peter Stringfellow.

As a further way of raising money at the event, the Party sold one-off prizes. These included, shoe shopping with May, a meal at the Carlton Club with Sajid Javid, dinner at home with Michael Gove and a session of jogging with Nicky Morgan.[5]

On becoming home secretary it was widely reported in the media that May had been educated at a comprehensive school.[6][7] In 2007 Peter Hitchens disputed this claim:

Now, here's the interesting thing. Mrs May joined Holton Grammar at the age of 13 (later than the usual 11) from a private school, in 1969. She then had about two years of grammar school education. And she completed her schooling at a new comprehensive, successfully enough to win a place at St Hugh's, then a women-only college at Oxford. But in 'Dod's Parliamentary Companion', the more detailed 'Who's Who' for MPs, she sums up her secondary schooling as 'Educated at Wheatley Park Comprehensive School'. As you see, it's a lot more complicated than that. And I don't think she needed to use the word 'comprehensive' when describing her school.[8]