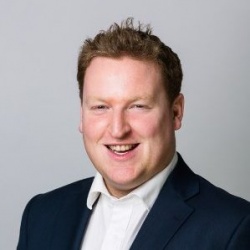 Before joining the government he was deputy head of policy at the Institute of Directors for two years until June 2016.

McLoughlin is the son of former chairman of the Conservative Party and former transport secretary Patrick McLoughlin, who was appointed Chancellor of the Duchy of Lancaster by the incoming prime minister Theresa May in July 2016. [2] He has been the MP for Derbyshire Dales since 2010.

In 2015 Patrick caused controversy by failing to declare that his son was involved in lobbying the public sector.[3]

In 2011 he left to become an associate partner at PR and lobbying firm Bell Pottinger.. [4][5]

In 2014 McLoughlin joined the Institute of Directors as its deputy head of policy.[6] At the IoD, McLoughlin reported to James Sproule, the chief economist and director of policy.[7]

In his new role in Downing Street, James is expected to 'liaise with the UK's business community'.