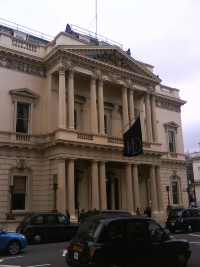 The Institute of Directors on Pall Mall, London

The Institute of Directors was established in 1903 and granted a Royal Charter in 1906. It is an association of businesspeople rather than of businesses. [1]

According to its website, the IoD is 'the UK's leading voice for business leaders, campaigning on a wide range of issues such as trade, skills, and corporate governance'. It'represents its members and advances the case for business in government, parliament, the media and other influential forums'. Its policy team 'oversees the development of IoD policy on the full range of issues affecting business from trade to taxation, enterprise to education'.

With over 37,000 members, its views differ from those of the Confederation of British Industry (CBI) (for example), as the IoD is an association of people each with an equal say - the majority come from small businesses (whereas the CBI is an association of businesses, some of which are larger and more influential).[2]

Pushing fracking in the UK

Watch and share: 'Meet the Frackers: a Spinwatch lobbying tour'

The Institute was an associate member of the All-Party Parliamentary Group on Unconventional Oil and Gas (which was initially run by heavyweight lobbying and PR firm Edelman until August 2014 then Hill and Knowlton Strategies[7] as well as being a member of its 'advisory panel'.

One of its staff Corin Taylor produced the IOD's report 'Getting shale gas working'in May 2013, which was sponsored by fracking firm Cuadrilla Resources. [8] Taylor soon went on to work for energy giant Centrica, which had investments in Cuadrilla's Preston New Road shale gas site near Blackpool, and was also later seconded to industry lobby group UKOOG which has led the push for fracking in the UK.