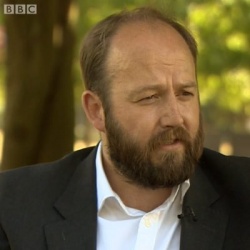 Nick Timothy is a special adviser and co-chief of staff to prime minister Theresa May. [1]

He previously was chief of staff and speechwriter to May when she was secretary of state for the Home Office and minister for women and equality [2], and served in her team from 2010 to 2015 general election. [3][4]

Timothy is described as 'fiercely loyal', 'not popular in the Home Office' and as 'rabid and an attack dog'.[5]

It was reported that Timothy had applied to run in the May 2015 election as prospective parliamentary candidate for the Conservative safe seat of Aldridge-Brownhills, [6] but had his name, unbeknown to him, removed from the candidate list. The Public Administration Committee reported on the incident, concluding that it is unacceptable for ministers or civil servants to be “complicit” in the matter, and that the special advisers in question should not have been refused the ruling they asked for. [7]

Following the incident, the Conservative Party apologised to Timothy for not reinstating him on to the list. [7]

Timothy was previously deputy director of the Conservative Research Department and responsible for much of its day-to-day running. [8] Nick managed a team of up to 20 policy advisers. He oversaw the production of policy papers, briefing notes, rebuttals and media strategies (e.g. for the general election TV debates, the launch of rival parties’ manifestos and the Queen’s Speech); contributed to the 2010 general election manifesto and edited the 2010 edition of the ‘Campaign Guide’; and was a member of David Cameron’s PMQs team and the Party’s by-elections team. [9]

He was also a directory of the charity New Schools Network - which promotes and helps set up free schools - from 2015 until he took up his role in No.10 in July 2016 [11]. The first director of New Schools Network, Rachel Wolf, had also taken up a role at No 10 as David Cameron’s education adviser. The second – Natalie Evans – is a Conservative whip in the Lords. SchoolsWeek even called the charity 'part of a revolving door'. [10]

Earlier in his career he worked in the insurance industry.

Away from the day-job he acts as a volunteer mentor to sixth-form students, who hope to study at university, for the Social Mobility Foundation from under-privileged families. [9]

For his special adviser role to May in the Home Office, Timothy was paid an annual salary of £74,000.[12]

Nick graduated with a first class degree in Politics from the University of Sheffield in 2001.