Rachel Wolf is a leading education reform figure in the UK. 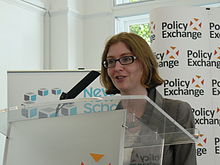 In April 2016 Wolf became a director of a lobbying firm Public First, founded with her husband James Frayne.

Public First says it'specialises in communicating with the general public about complex corporate and political issues.' The firm's focus is on changing public opinion in order to change political opinion, or as Public First's website puts it, they help clients to 'move public opinion and to mobilise it on their [corporate clients'] behalf'[1]:

'With experience at the highest levels of Government, policy making and media relations, we believe reputations are made – and policy goals met – by engaging with the public.'

A lot of its work 'takes place online using a mix of digital campaigning and microtargeting', but also includes 'advertising, policy research... direct mail and even physical grassroots campaigning when the job requires it'.[2]

In Sept 2016, Wolf and husband James Frayne established a new lobby group called Parents and Teachers for Excellence (http://www.parentsandteachers.org.uk), which is calling for various education reforms, including more testing and stronger behaviour policies.

PTE has pledged to shift the education debate from the “elites in Whitehall” and mobilise parents and teachers to make the case for education reform, by building a coalition of heads, teachers and parents “to push the things they think are important”.[3]

The directors of the lobby group are Jon Moynihan, a venture capitalist, Conservative Party donor, and chairman of the finance committee of the campaign to leave the EU, Vote Leave; and Rachel de Souza, chief executive of Inspiration Trust, a multi academy trust that was accused of ignoring the wishes of parents when it took over a school in Norwich, despite protests and an independent consultation finding most of the respondents were hostile to a takeover.

PTE is refusing to name its financial backers. It told Schools Week only that is being funded by a “small group of philanthropists”.

The name of the lobby group suggests it is a grassroots organisation representing the voices of ordinary parents and teachers. However, its initial supporter list is dominated by policymakers, lobbyists and CEOs of large academy school chains, all of whom support market reforms in education. As Schools Week' noted:

The campaign has drawn parallels with what is known as “astroturfing” – the practice of masking sponsors of an organisation to push a public relations campaign as a grassroots movement. While at free market think tank Reform, Frayne is credited with setting up a similar organisation in the NHS, Doctors for Reform. The group claimed to represent 1,000 medical practitioners, but again did not disclose its funding.'[4] 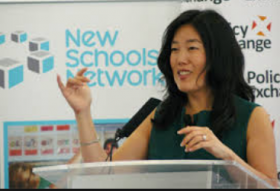 PTE is said to have been influenced by StudentsFirst, the US education-reform lobby group led by vocal education reformer, Michelle Rhee. PTE’s strategists were reportedly impressed by StudentFirst's campaign as being the “right way to take the debate to ordinary people”. In 2012 Rhee spoke at an event held jointly by Wolf's New Schools Network) and Policy Exchange, where Wolf's husband James Frayne is Director of Policy and Strategy. StudentsFirst was also criticised for not disclosing its funders, although it is known to have received funds from Michael Bloomberg, the Laura and John Arnold Foundation and $8 million from the Walton Family Foundation. In 2016 StudentsFirst merged with the education reform lobby group 50CAN.

Writing the UK's edtech strategy in No.10

In September 2015, Wolf was appointed adviser to the Prime Minister David Cameron on 'technology, innovation and education', joining the Number 10 policy unit. According to Lord Jim Knight, former Schools Minister turned edtech lobbyist, Wolf is writing the UK's edtech strategy: 'I think the macro is starting to emerge,' Knight said, 'but not necessarily from the Department for Education. Number 10, Rachel Wolf the advisor there, is the advisor to David Cameron on both education and technology, she told us at a meeting in January [2016] that she was going to have within a year an EdTech strategy.'

However, it was announced in August 2016 that Wolf had chosen to step down from her role in Number 10. This was despite the fact that she was one of the few Downing Street advisers to have initially been kept in post when Theresa May took over from David Cameron as prime minister.[5]

Prior to her appointment as an adviser to No.10, Wolf worked at Amplify, the failed education technology firm launched by Rupert Murdoch at News Corp and run by Joel Klein. Murdoch’s vision for News Corp’s education division was to digitise first America’s, then the world’s, classrooms to ‘fundamentally change’ the way we think about delivering education. This is why. ‘We see a $500billion sector in the US alone that is waiting desperately to be transformed by big breakthroughs,’ Murdoch told investors.[6]

Before that, Wolf founded and ran the New Schools Network, a group established by Michael Gove to increase the number of independently-run, but state-funded, Free Schools in England.[7]

The New Schools Network was Gove’s vehicle for getting free schools moving. Wolf was ‘helped out’ early on by another of Gove’s inner circle, Dominic Cummings. To get the charity off the ground, it was also controversially handed half a million pounds by Gove’s department. Within weeks of Education Secretary, Gove, taking the reins, Cummings was urging officials to stump up the funds without delay: ‘Labour has handed hundreds of millions to leftie orgs if u guys cant navigate this thro the bureauc then not a chance of any new schools starting!!’ he wrote.

The impetus for the New Schools Network was a fact-finding trip to New York. Rachel Wolf’s mission for the Conservative Party in 2008 was to study the city’s charter school reforms. She took inspiration from Joel Klein and was keen to learn from his experience, asking for advice on ‘convincing’ arguments to persuade the public and journalists of the case for privately run schools. Klein declined an offer from Wolf to be on the New Schools Network’s council. Instead James Merriman of the New York Charter School Center became an adviser to his British counterparts.

One of the top reasons for people wanting to set up a free school, ‘to be honest’, Wolf said, is the freedom they have over teachers’ ‘pay, conditions and recruitment’.[8]

Wolf is the daughter of Martin Wolf, chief economics commentator at the Financial Times, and Alison Wolf, professor of public-sector management at King's College, London. She was educated at Alleyn's, an independent school in south London, and studied natural sciences at Cambridge.[9]

Wolf has also worked for Boris Johnson and the Institute of Education.[10]

She is married to lobbyist James Frayne.