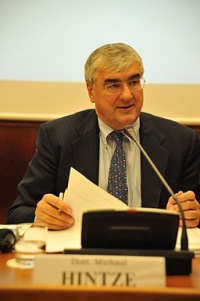 Michael Hintze is an Australian businessman, philanthropist and political patron, based in the United Kingdom.

He is a former head of equity trading at Goldman Sachs and the founder of CQS Management [1] a private London hedge fund.

Hintze is a major donor to the UK Conservative Party.

Hintze supports Brexit and donated £100,000 to the campaign to take the UK out of the EU.

He said in the run-up to the June 2016 referendum that Britain had more to fear from staying in the EU than departing it.

According to the Guardian Hintze declined to fund a climate change project in a September 2011 email, in which he stated: "Furthermore we are supporting Nigel Lawson's initiative." This is taken to be a reference to Lawson's Global Warming Policy Foundation.[2]

Hintze was caught up in the 2011 scandal involving then defence secretary Liam Fox and his friend and self-styled adviser, Adam Werritty.

Hintze had funded Fox's charity Atlantic Bridge, which was at the centre of the scandal. According to the Guardian, the accounts for former Defence Secretary Liam Fox's defunct charity Atlantic Bridge "show that £104,000 – or 58 per cent of the charities voluntary income – had come from one source: the Hintze Family Foundation." The paper concluded that if Adam Werritty drew a salary as executive director of the Atlantic Bridge, the money would in practice be largely coming from Hintze.[3]

One of Hintze’s employees, Oliver Hylton, was also the sole director of Pargav, the vehicle which funded Adam Werritty following the closure of Atlantic Bridge.[5]

Hylton was also a director of Security Futures which had donated £15,000 to Atlantic Bridge the previous year.[3]

In October 2011 the Financial Times reported that CQS had a $21.5 million stake in L-3, a US communications firm which had a contact with the Ministry of Defence. The paper quoted an un-named Tory MP as stating: “Hintze is not motivated by [financial] defence interests,” he said, “but a shared ideological agenda [with Mr Fox]. But perception does matter.”[7]

Hintze is a major donor to the Conservative Party. He donated £1.5m to the Tories in the decade to 2014.[8]

Hintze has said of his support for the Party: "it is pretty clear to me that my success has happened in Britain because of the context that the Conservative Party provided".[9]

In October 2011 Labour MP John Mann called for the Electoral Commission to investigate Hintze's donations: ‘Michael Hintze is a hedge fund boss and where he wants influence is over financial regulation. He does not have to ask Tory Ministers for anything, the act of giving simply changes their behaviour. When they come to consider the issue of financial regulation they are much less likely to do something if it upsets someone who makes such generous donations.’[10]

Dinner with the PM

Hintze and his wife were dinner guests of then Prime Minister David Cameron in July 2010.

On the 9 February 2015, the Conservative Party held their annual 'Black and White Ball' election fundraiser at the Grosvenor Hotel in London.It was reported that Hintze would be expected to host a table.[11] One Tory donor told the Guardian he had been told if he bought a 'premium table at the event for £15,000 he would expect the company of a cabinet minister' and if 'he paid £5,000 for a standard table, he would expect a junior minister'.

The event was attended by almost the entire Cabinet and by party donors. To raise additional money at the event, the Party sold prizes, including: a 10km Iron Man run with Iain Duncan Smith, dinner at home with Michael Gove and his wife, shoe shopping with Theresa May, a meal at the Carlton Club with Sajid Javid and a session of jogging with Nicky Morgan.[12][13]

Hintze began his career in finance with Salomon Brothers, completing the firm's graduate trainee programme in 1982.

In 1999, Hintze launched his hedge fund Convertible & Quantitative Strategies, or CQS, with a $200 million investment from Credit Suisse, whose then European head, Hector Sants worked closely with him.[3]

Hintze's hedge fund CQS took out a short position on Bradford & Bingley, which went on to lose 95 per cent of its value and was on the brink of collapse before it was rescued in late 2008. Short-selling involves a trader borrowing shares for a fee and selling them in the hope that, if the share price falls, the trader can buy them back at a cheaper price and return them to the borrower, thereby making a profit. The practice was banned by the UK government in September 2008.[17]

Hintze's grandparents fled Russia for China after the 1917 Revolution but his parents became refugees after the Communists took power there. [6] His father Michael M. Hintze became professor of engineering at the University of Sydney.[18]

Hintze told Financial News that his Catholic upbringing was an important influence on his philanthropy:

My grandmother was very philanthropic. My mother did it. I went to a Catholic parochial school, so we watched what the nuns were doing, what the Christian Brothers were doing, all these people giving back to the community.[9]

Hintze was educated at the University of Sydney, the University of New South Wales and Harvard University. He holds degrees in Physics and Pure Mathematics and Electrical Engineering, an MSc in Acoustics and an MBA from Harvard Business School. [19]

He started his career in the Australian Army, serving as a captain before moving to the US to work in finance.

Hintze and wife Dorothy have wide-ranging philanthropic interests, consolidated in the Hintze Family Charitable Foundation and support around 150 different causes. Among major donations, he has established the chair of International Security at the University of Sydney, enabled the restoration of Michelangelo’s frescoes in the Pauline Chapel at the Vatican and sponsored two major galleries at the Victoria and Albert Museum. He has also provided funding for the Old Vic in London. He is a trustee of the National Gallery and of Wandsworth Museum.[20]

He was made a Knight Commander of the Order of St. Gregory by Pope Benedict XVI in 2005 and is a known supporter of both Catholic and Anglican institutions.[21]

Hintze currently serves as chairman of the Prince’s Foundation for the Built Environment, a trustee of the National Gallery, the Institute of Economic Affairs, the University of Sydney Trust and Wandsworth Museum. He also serves on the International Council of the V&A and is a Patron of the Arts of the Vatican Museums. In 2009 he was appointed vice-president of the Public Monuments and Sculpture Association.