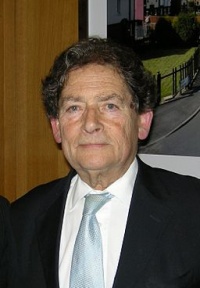 Although he has no scientific credentials, Lord Lawson is probably the most high-profile and prolific climate sceptic in the Tory Party. His son, Dominic Lawson, who is also a climate sceptic, [2] is married to Rosa Monckton, the sister of the infamous climate denier and sceptic Christopher Monckton. [3]

In 2009 Lawson set up the Global Warming Policy Foundation (GWPF). The GWPF claims that its main purpose is ― to bring reason, integrity and balance to a debate that has become seriously unbalanced, irrationally alarmist, and all too often depressingly intolerant.[4] Yet it relentlessly claims that climate change will not have serious effects. The group‘s claim to be sceptical about climate policy and not about climate change itself appears a strategic choice, given that the GPWF oozes climate change denialism.[5]

The Foundation, which secured £500,000 in funding in 2010, does not disclose its funding sources. In its annual report Lawson gave this justification:

There has been criticism in some parts of the media and elsewhere that we do not disclose the identity of our donors. In this we are not alone. Few think tanks do. Unlike most other charities, think tanks tend to operate in controversial areas, indeed, that is part of their raison d’être. It is understandable that donors do not wish to be publicly engaged in controversy. This is particularly true of GWPF, where the soil we till is highly controversial, and anyone who puts their head above the parapet has to be prepared to endure a degree of public vilification. For that reason we offer all our donors the protection of anonymity.

In order to reassure those who might otherwise doubt our complete independence, our Protocol for the Acceptance of Gifts lays down that we do not accept donations from the energy industry or from anyone with a significant interest in the energy industry. [6]

Whilst there is no way of independently verifying the aforementioned information, Lawson does have links to some of the world’s largest energy companies. He is chairman of the Central Europe Trust, whose clients include BP Amoco, Shell, Texaco and Total. [7]

Questioned over these links by the Guardian in in February 2012 Lawson responded:

As I pointed out to John Prescott, who raised this non-issue under cover of parliamentary privilege more than two years ago, Central Europe Trust Co Ltd is an advisory firm which, over the years, has had clients in most industries, although its main focus has been telecommunications. It has not, in fact, had any oil company clients for many years now; and at the present time its only involvement in the energy industry is a very small interest in wind and other renewables in central Europe.

CET Polska, which was originally a subsidiary of Central Europe Trust Co Ltd, has for some years now been controlled and majority owned by its Polish partners, and the only connection between the two entities now is collaboration on an ad hoc basis. I have no financial interest in CET Polska, and am neither a Director of, nor a shareholder in, the company.

But Lord Lawson's prompt explanation as to why this is a silly "non-issue" is not straightforward, in my opinion. It can be summarised as: it was all a long time ago, in a land far away and, in any case, how dare you doubt the word of a peer of the realm. I wrote back and asked why the information linking Lord Lawson to the filthy power station remains on the relevant websites, if it was such a long time ago and so far away. The response this time was silence.

As of April 2014, Lawson's chairmanship of the Central Europe Trust was no longer declared on the Lords' register of interests, nor on the company's website.

Previously he had declared the interests below (circa 2009):