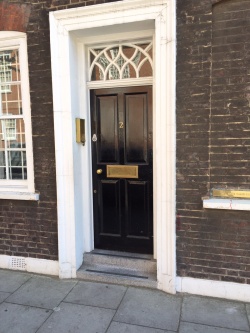 The Institute of Economic Affairs (IEA) is a seminal free market think-tank based in London. Through its promotion of free market theorists like Milton Friedman it provided an intellectual rationale for business friendly political and economic reforms introduced by the Thatcher government in the UK - a political programme which later came to be known as neoliberalism.

Ralph Harris and Arthur Seldon with their philosophical mentor Friedrich Hayek outside IEA's Westminster office in 1984.

The oldest and biggest daddy of them all, the Institute of Economic Affairs, exists to propagate the ideas of free markets and privatisation. It has been going for nearly 50 years, and advises governments all over the world on ways to denationalise and bring in market systems.[1]

The Institute of Economic Affairs was set up in the mid-1950s by Antony Fisher, an Old Etonian chicken farmer who had made his fortune by pioneering US battery farming techniques in the UK. Fisher had joined the Mont Pelerin Society and had been advised by Friedrich von Hayek against going into politics to spread the neoliberal philosophy. Instead Hayek recommended that Fisher change society by targeting intellectual opinion. [2] Fisher therefore founded IEA and recruited the Cambridge-trained economist Ralph Harris as director, and Arthur Seldon as research director. [3] The BBC documentary Tory! Tory! Tory! states: 'They would grow old together side by side, Seldon writing, Harris hustling.' [4]

In a March 2009 presentation Tim Montgomerie and Matthew Elliott described IEA as part of the infrastructure of the conservative movement in Britain.[6]

Agriculture and the environment

IEA was founded in the 1950s by Antony Fisher out of a fortune made from intensively farmed broiler chickens (Buxted Chickens). Given a founding father who was both a pioneer of factory farming and an extreme free marketeer, it is hardly surprising that the IEA has consistently promoted the view that deregulated intensive farming and unfettered 'free trade' are of great benefit to the environment. But it wasn't until the 1990s that the IEA started seriously to focus on environmental issues.

In 1990 the IEA warned that 'green' policies would lead to an 'ecological hell' and a plummeting standard of living. In 1993 the IEA launched its Environment Unit. Its director was Roger Bate. A formal launch came in March 1994 to coincide with the publication of the Unit's first book, Global Warming: Apocalypse or Hot Air? The book was co-edited by Roger Bate and Julian Morris. Morris had been a Research Fellow at the IEA since 1993 and in July 1998 became the Environment Unit's co-director.

In August 1999, Bate and Morris published a book called Fearing Food: Risk, Health and the Environment. According to an IEA press release:

The book shows that intensive agriculture is good for health and the environment, and is essential if the world's population is to be fed without converting vast areas of biodiverse ecosystems into cropland, which would be necessary if organic agriculture, with its lower yields, were used.[7]

It contained a chapter by Dennis Avery of the Hudson Institute, 'The Fallacy of the Organic Utopia', and one defending GM crops co-written by John Hillman from the Scottish Crop Research Institute and Michael Wilson of Horticulture Research International.

Bate and Morris are affiliated to a series of organizations, other than the Institute of Economic Affairs, several of which they founded themselves. Fearing Food was said to be a publication of the European Science and Environment Forum (ESEF), which Bate both co-founded (1994) and directed (the original ESEF website was registered by Morris). However, a press release announcing the book, headed 'Londoners demand regulation of potentially deadly organic food', was sent out in the name of the IEA.[8]

A year later, Morris appeared in his role as director of the IEA's Environment Unit in a ‘Counterblast’ programme on BBC 2 TV (broadcast 31 January, 2000). The programme was written and presented by Bate in his role as Director of ESEF. No mention was made of Bate's IEA affiliation and the same went for several other IEA intimates, such as IEA Media Fellow Richard D. North. The Counterblast series is intended by the BBC to allow 'members of the public' to air their views.

In June 2000 the IEA hosted An Occasional Lecture at their offices in London, entitled 'Frankenfood and Monarch Butterflies'. It was given by CS Prakash of the AgBioWorld Foundation. AgBioWorld's campaign was co-founded by Greg Conko of the Competitive Enterprise Institute, where Bate is an adjunct fellow.

In September 2000 the assistance of the Institute of Economic Affairs was acknowledged by the authors of an anti-organic report launched in the U.S. The authors included Monsanto's former director of executive communications, Graydon Forrer, and Alex Avery of the Hudson Institute. The controversial ideas on organic food of Alex's father, Dennis Avery, had been central to Fearing Food and the way in which Bate and Morris had launched it a year earlier (with a press release about "deadly organic food", see above).

Among others associated with the IEA's Environment Unit are Matt Ridley and Philip Stott. Stott claims to have 'no formal connections with the IEA' and not to 'share their economic views'. Note the stress on 'formal'. He entirely shares their antipathy towards environmental concerns, is close to Morris and Bate, has had a monograph published by the IEA, and has contributed to IEA-led events.

The IEA claims to have 'no corporate view' but this appears to be a device to enable the IEA to distance itself where convenient from the often controversial views promoted by its staff and associates.

In addition to promoting the free market economics and monetarist theory particularly associated with Friedrich Hayek and Milton Friedman, the IEA also disseminated Public Choice theory, a branch of neoliberal thought which uses rational choice theory as a basis for attacking the ethos of the public sector. Writing in 2000, IEA's Arthur Seldon recalled:

From the early 1960s onwards, the IEA published writings by the two founders of 'public' choice, Professors James Buchanan and Gordon Tullock... The first publication ['The Inconsistencies of the National Health Service'], in 1965, emerged from Professor Buchanan's observation at a discussion of the National Health Service that its incurable underlying dilemma was that the people would not pay taxes for as much (or as good) medical care as they desired or expected 'free' from government. Then, as still in our day, the explanation by sociologists and political scientists, that the cause was 'under-funding', was based on the continuing preoccupation with macro-economic rather than micro-economic thinking. [9]

Seldon also notes Tullock's Hobart Paper The Vote Motive, published in 1976, and an IEA publication The Economics of Politics, which resulted from a two day conference attended by James Buchanan and economists from Canada the US and Switzerland. [10]

The IEA are known for their work in the field of privatisation. It was they who commissioned Stephen Littlechild in 1981 to write the paper "Ten steps to denationalisation". Littlechild later became one of the four "regulators" who oversee 20% of the UK's GDP in the form of the four utilities: Gas, Water, Electricity and Telecommunications. They have also influenced the Government's minimum wage policy, promoted the notion that "non-traditional" families (i.e. black and Asian) produce more delinquent children, and lately have advocated that "student loans should be charged at a higher rate of interest." Mrs Thatcher herself stated that "What we have achieved could never have been done without the leadership of the IEA."

The IEA has been a consistent advocate of increasing the 'purity' of the privatisation arrangements in the water industry in England and Wales. Regards Scotland, two of the IEA's most influential members John Blundell and Colin Robinson have written regularly on the case for privatisation of Scotland's water services. Colin Robinson wrote a particularly forceful advocacy of privatisation through the Policy Institute [11]. The IEA, in conjunction with Marketforce organise conferences considering issues pertaining to water and the commercial opportunities within the sector. These conferences are economically prohibitive to people outside the industry.

IEA has also campaigned against the ban on smoking in pubs and tobacco displays in shops. It published a report in 2010 claiming the ban on tobacco risks 'significant economic damage and a deterioration in public health'. The claims have been questioned by researchers.[12]

In November 2010 the Institute released a 130-page report that denounced the fair trade movement as 'froth', and fair trade as 'costly, opaque and substantially unproven'. Entitled Fair Trade without the Froth: A Dispassionate Economic Analysis of “Fair Trade”', the report argued that 'claims by the Fair Trade movement are seriously exaggerated'. [13]

The report received wide media coverage. The Guardian's John Vidal described the report as 'vicious' and pointed out that the author of the report, Sushil Mohan had spent years working as an adviser to the global tea and coffee industries. [14]

The IEA states it is 'entirely funded by voluntary donations from individuals, companies and foundations ...it does no contract work, accepts no money from government and is independent of any political party. [15] However questions have been raised over its right to charitable status, with Labour MP Dale Campbell-Savours in a 1991 House of Commons debate[16] describing IEA's activities as "patently political".

According to an article in the Guardian:

The Democracy Institute's Patrick Basham and John Luik launch their report, The war on working-class culture: How political elites denormalise a way of life, on Thursday evening (6th May 2010) in Westminster at the Institute of Economic Affairs[17]

The Institute of Economic Affairs is a former member of the Stockholm Network, they left the network in 2005 because 'as an educational charity we felt it was inappropriate to be a member of an organisation whose mission we could not control'.[18] [19]